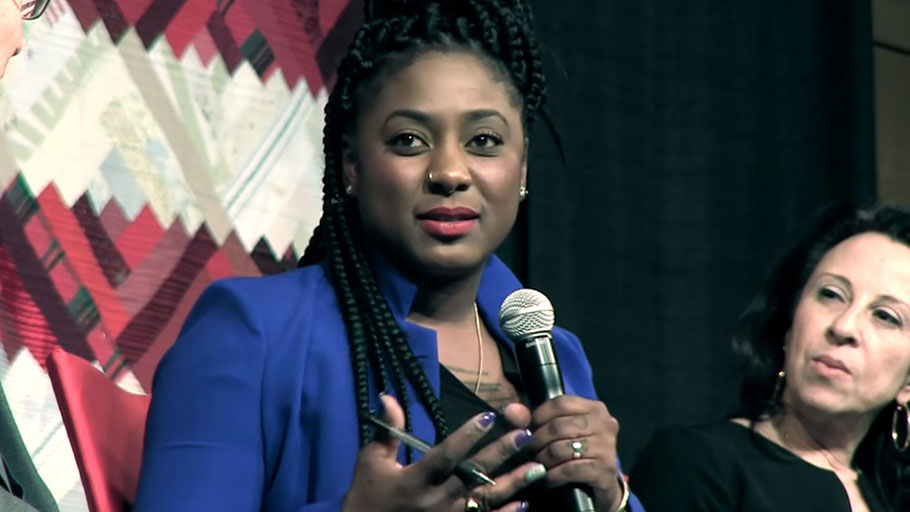 The co-founder of the Black Lives Matter movement talked to The Nation about her initiative to engage skeptics and build political power among black communities.

In 2015, I profiled activist and organizer Alicia Garza as part of Glamour’s “Women of the Year” issue. Garza, along with Patrisse Cullors and Opal Tometi, is credited with coining the phrase #BlackLivesMatter, popularizing the hashtag and for its quick ascendance into a nationally recognized movement against police brutality and violence. Profiling Garza in Glamour felt like a big deal—it solidified her, and Black Lives Matter, as having penetrated the consciousness of mainstream America.

Since then, Black Lives Matter has gone from a rallying cry to an organization with more than twenty chapters, which is that is part of a racial-justice coalition of over 50 other organizations. A mission statement was drawn up, demands were made.

But after the election of Donald Trump, which many in the movement see as a nationalist backlash to the core principles Black Lives Matter has brought into focus, we began to see a drop-off in the media coverage of protests and actions. But perhaps that’s not the best measure of the movement. “Protest is best used when it’s part of a strategy that involves escalating tactics that build pressure on targets,” Garza told me. Aware of in the political environment we’ve now found ourselves in, Garza, who is still one of the most visible organizers of the Black Lives Matter movement, recently launched the Black Futures Lab, a project that will be devoted to engaging in the electoral process without neglecting deeper organizing. “Our mission to engage Black voters year-round; our commitment to use our political strength to stop corporate influences from creeping into progressive policies; and our plan to combine technology and traditional organizing methods to reach Black people anywhere and everywhere we are,” its website explains. Garza’s recent efforts have been touted by Senator Kamala Harris and television giant Shonda Rhimes.

Garza: This is a really good question. I think that a lot of people are trying to figure out: what do we do? This is a really complicated time, politically, and not an experience that we’ve had before. This isn’t like what happened when Ronald Reagan was elected. This is not like what happened when both Bushes were elected. This is actually a new faction of the conservative movement that wrestled [with] power and won. And so I think a bunch of folks are trying to figure out what to do. However, I also think that there’s still not agreement about what arenas we need to impact in order to build the kind of power we need to change our lives. And I think that that’s a healthy debate—and it’s an old one.

Garza: The reason that I started the Black Futures Lab is because I have some clarity about what I think needs to happen, in relationship to electoral organizing. It’s not a destination. It is a set of tools that we use to engage people that we care about, en masse, around issues that are important to us. Our goal is to create space for people who may still be skeptical about elections and electoral politics, but are ready to experiment with new ways of engaging our people so that we can actually win. We see this not as an answer but as a complement to what needs to be a complex ecosystem that is completely in service of building power for black communities across the country.

The Nation: You mentioned that that many black folks and people of color are skeptical of electoral politics and also of the electoral process. I think rightfully so. How do you build engagement and deal with skepticism at the same time?

“Our goal is to create space for people who may still be skeptical about elections and electoral politics, but are ready to experiment with new ways of engaging our people so that we can actually win.”

Garza: The way that we are working to build engagement is to talk to as many black people as we can, people we expect will have different political perspectives, different visions, different perceptions. Demographically, black people are changing in this country, and I’m not totally sure that we understand those complexities. And beyond just understanding it, I’m not sure that those complexities are, as of yet, shaping our strategies. And that is the most important thing.

The Nation: So what are your strategies for figuring out the needs of these different demographics?

Garza: One of the things that we started dreaming about when we started the Black Futures Lab was the Black Census Project, which we launched last week. We decided we wanted to talk to 20,000 black people across the country, from diverse black communities, because we really wanted to get a sense of what black people want. So, we are engaging black people online and we’re also engaging people offline. We’re training 100 black organizers that we are putting into 20 states, starting at the end of this month, because we actually want to lay it bare.

The Nation: Since Trump’s election, the Black Lives Matter movement has been perceived as pulling back a bit, as sort of lurking in the shadows. And it’s fair to say actions are not happening with the same frequency, and the movement is not as front-and-center as it once was. What do you think it’s all about? And how will Black Futures Lab interact with the movement as a whole?

Garza: As you keep pulling back the layers of how deeply rooted anti-blackness and white supremacy are in this country, it is exhausting and it is traumatizing. And if you look at it as a long game, there are always ebbs and flows.

I think that what people have started to realize—or have always realized, but got swept up in the momentum—is that protest is a tactic best used in service of a larger strategy. What we do when we take to the streets is we demonstrate our power in numbers. But protest is best used when it’s part of a strategy that involves escalating tactics that build pressure on targets. And it’s hard to sit in that when people that we love and care about are being murdered.

We need to take on this question of how black people are always presented with impossible choices during elections. We always toe-up on the right side, but there’s not enough of us, by ourselves to actually turn the tide, right? We keep things from going to shit—and I think black people are tired of being janitors for the movement, right?

“We need to take on this question of how black people are always presented with impossible choices during elections.”

The Nation: So why the census project first?

Garza: I would say even though there was a viable second Democratic candidate, none [of the Democratic candidates] were adequately able to address a rising protest movement of young black people who are protesting state-sanctioned violence and straight-up extra-judicial murder. I honestly think folks don’t have tools for that. I saw lots of town halls that were like kind of photo-oppy and [involved] talking to black people about what it was going to take for us to get into the middle-class. It’s just kind of rings hollow—it’s like you’re making promises that you can’t keep without addressing structural racism.

The Nation: So you are trying address that omission?

Garza: We are working to transform black communities into constituencies that build power in cities and states, so that we’re not faced with those kinds of untenable choices, that we have real choices, the candidates actually feel accountable to our communities, can clearly articulate the concerns of our communities, as diverse as they are. And beyond that, that we’re able to kind of develop our own solutions and figure out different ways of moving solutions through legislative processes that may not involve working for or against candidates, right? But it certainly involves having to hold candidates accountable and politicians accountable.