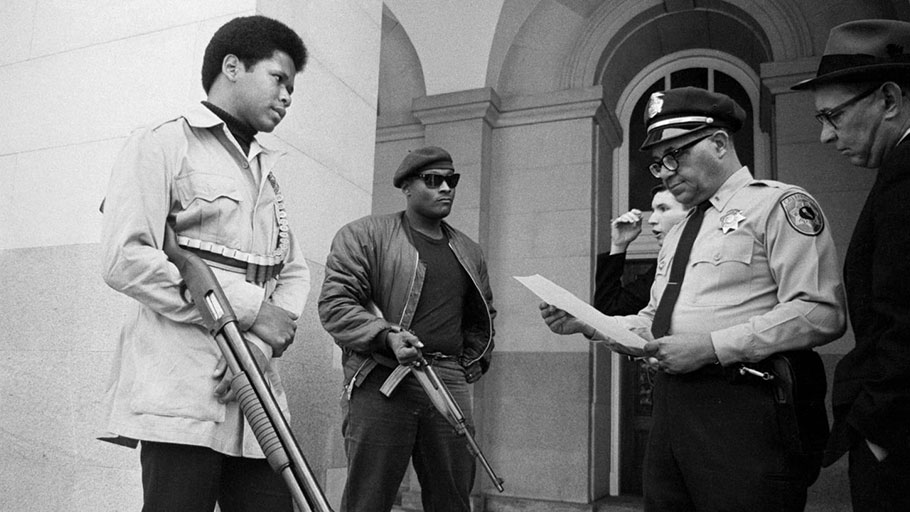 You Are Here: Home » Blog » Editors' Choice » The Racist Origin of the Second Amendment and the Rise of Black Gun Ownership

Two members of the Black Panther Party are met on the steps of the State Capitol in Sacramento, May 2, 1967, by Police Lt. Ernest Holloway, who informs them they will be allowed to keep their weapons as long as they cause no trouble and do not disturb the peace. Earlier several members had entered the Assembly chambers and had their guns taken away.

Siwatu-Salama Ra, 26, will likely spend the next two years in a Michigan prison. In early February, a Wayne County jury found the six-months pregnant Black mother of a toddler guilty of felonious assault and felony firearm possession. She was sentenced last week.

Outside her mother’s Detroit home last summer, she pulled a gun on a neighbor, who Ra says used her vehicle to hit her car with Ra’s 2-year-old daughter inside, and then tried to “run over” her and her mother. The firearm was not discharged, in fact, Ra alleged the gun was not even loaded. Her attorneys argued that her actions were in self-defense. An appeal is underway.

Ra is a Concealed Pistol License holder. Her case — which centers on self-defense with a firearm in a Stand Your Ground state — is happening during a national debate over gun laws and the Second Amendment, which states: “A well regulated Militia, being necessary to the security of a free State, the right of the people to keep and bear Arms, shall not be infringed.”

The debate over an individual’s right to bear arms was reignited since last month’s mass shooting at a high school in Parkland, Florida, where 19-year-old Nikolas Cruz took 17 lives, has been framed as yet another partisan conflict that has divided the country. Those on the right support the Second Amendment, and those on the left are calling for either its repeal, or tighter gun control. But the reality is more nuanced: some on the right support gun law reform, and some on the left support the Second Amendment.

In particular, many people of color say they have good reason to be protective of their right to bear arms.

NOTE: An ongoing court case against Yafeuh Balogun’s brother, Christopher Daniels, could become the first prosecution of someone tracked as a so-called “Black Identity Extremist” in the US. See Truthout’s coverage for more on that story.

In Dallas, Texas, Yafeuh Balogun describes himself as being “on the left side of things” even though in 2008 he co-founded Guerrilla Mainframe, a political organization that supports the Second Amendment and the basic right to defend yourself. Guerrilla Mainframe is also a community organization that provides programs for food, clothing and shelter, health and wellness, and self-defense, which includes firearms safety and training. It is part of the Huey P. Newton Gun Club, a coalition of several organizations with a common goal of educating and arming African American communities to “defend themselves against police brutality and fratricide.”

“I think a lot of people, especially African Americans, are really starting to wake up to the idea of self-defense, especially when we have a megalomanic like Donald Trump in office.”

Balogun seems to be correct. Gun sales, and gun club memberships among African Americans have gone up since the election of Trump, whose campaign was backed by the National Rifle Association. However, gun sales in the overall population have gone down since the election.

After the Parkland shooting, corporations such as Dick’s Sporting Goods, Kroger, and Walmart raised the minimum age for firearm sales from 18 to 21. The Florida Legislature also raised the state age for gun purchases to 21. But reform advocates don’t think that goes far enough. They’re calling for a ban of assault rifles, such as the AR-15, which has been a weapon of choice for mass shooters. Some are even calling for a repeal of the Second Amendment.

Balogun doesn’t think banning assault weapons will stop the violence — mass shootings, or otherwise. “It is the culture, the political climate, [racism, capitalism, imperialism, sexism/genderism, and anti-immigrant policies] in America that creates the violence. America has always been a very violent place from its inception. So, banning assault weapons does not cure it.”

And he may be right, according to historian Roxanne Dunbar-Ortiz.

Dunbar-Ortiz writes in her new book, Loaded: A Disarming of the Second Amendment, “While gun-rights proponents are hard-pressed to offer a legitimate reason for civilians to own assault weapons, they are used in a very small proportion of gun crimes. Most crimes involve ordinary handguns.”

The type of gun, Dunbar-Ortiz asserts, is not the problem. The problem is that people want to interpret the Second Amendment as being about more than individual rights.

Total gun deaths in the United States average around 37,000 a year, she writes, “with two-thirds of those deaths being suicide, leaving 12,000 homicides, a thousand of those at the hands of police.” Mass shootings, although horrible enough, account for only 2 percent of gun killings annually.

In an interview, Dunbar-Ortiz explained that the right to have a gun comes from the Bill of Rights. “And the Bill of Rights is about individual rights,” which at the time it was written meant the rights of White men who needed guns to dominate slaves and Native Americans.

“So the Bill of Rights is the right for each individual to practice whatever religion they want, freedom of speech, and so forth. And to arm themselves.” There was a period in time, she said, when it was against the law for the new settlers not to carry a weapon.

“But it doesn’t work for freedom movements,” said Dunbar-Ortiz. “It was created for domination of people of color — for slave patrols, and militias to kill Indians. So, it still has that element”: Now it is used to criminalize people of color, she said.

Throughout history, gun control laws have been used against people of color as a tool to invite brutal state responses. Consider the Black Panthers who armed themselves, the Native Americans who fought in the Battle of Wounded Knee, Black Lives Matter protesters, the Standing Rock uprising.

We’ve witnessed it more recently for individuals like Philando Castile, who was killed by a fearful police officer in 2016 for legally having a firearm during a traffic stop.

In 2012, a Black Florida woman, Marissa Alexander, was sentenced to 20 years for firing a gun at her estranged husband who she said was attacking her. She had a permit for the gun. Since her release last year after serving five years, she has sided with Florida Republicans and become an advocate for gun ownership and stand-your-ground defenses.

In fact, many Black people are against tighter gun laws because those laws, even more so than drug laws, continue to be used disproportionately to put them into the criminal system.

According to the 2009 report Racial and Ethnic Disparities in the US Criminal Justice System, Black people are arrested for weapons crimes at a rate 4.4 times higher than White people. FBI data for 2016 shows weapons violations at the city, state, and federal level were used to arrest Black people 42 percent of the time, and White people 56 percent. Black people make up 13 percent of the population.

Chanel Tillman of the Black Gun Owners Association in Jacksonville, Florida, said she could only imagine the horrors for people of color if gun laws were reformed.

“If they can remove firearms like that from the masses, that basically…takes them away from us,” Tillman said. “And honestly, I think that’s the biggest part of it [for us]. You can guarantee that there will be some kind of loophole that will affect Black and Brown people more than anybody else.”

Our motto is “Stay armed. Live free.” If you take our guns from us, she said, we are no longer free. “Then they are free to do whatever they want to us, and we have no way to protect ourselves.”

Tillman co-founded the Jacksonville chapter last September, and it now has 32 members.

She said she’s aware the origin of the Second Amendment was to arm White people against people of color and also understands Dunbar-Ortiz’s position that we’re not really “free” if we have to carry guns to protect us.

But, she said, “why worry, if you know you have the ability to protect yourself? You don’t have to worry about it. You just have to be proactive and ready when the time comes.”

And this is the message the national Black Gun Owners Association shares with its membership of 10,000 legal gun owners. Its one-year anniversary is in April.

“Safety and protection of family, that’s the biggest thing. And making sure we’re aware of our rights.” Firearm safety and tactical training are part of what members receive, too, she said, and someone to look out for them.

The association is not a political organization, she said, but exists for their community “to get an understanding of firearm safety and obtain proper training with people who look like them and share the same concerns as them for our people.”

Gun ownership among Black people is about the same things as for White People, she says. “Protection of self, family and property. Gun ownership has always been taught as a pseudoscience for Blacks because of slavery and Jim Crow. We aren’t here to hurt anyone, but protecting our own will come first.”

Appeals take a long time, and there’s a good probability that Ra could have served the two years by the time there’s a resolution. The hope, Ferguson said, lies with the governor’s office and a possible pardon or commutation. She is also hoping to get Ra released on bond pending the appeal “so that she can be with her family when she gives birth. And not have to be immediately severed from her newborn baby.”

What is certain is that gun control and Second Amendment debates do not clearly line up as left-right issues, and many people of color are faced with uneasy support for a civil right that began as a way to oppress them.

Author Dunbar-Ortiz says, if more people on the left understood the history of the Second Amendment and how it’s been used against people of color, she doubts they would support it.