Marielle Franco, a Brazilian Politician Who Fought for Women and the Poor, Was Killed. Her Death Sparked Protests Across Brazil

You Are Here: Home » Blog » News & Current Affairs » Marielle Franco, a Brazilian Politician Who Fought for Women and the Poor, Was Killed. Her Death Sparked Protests Across Brazil 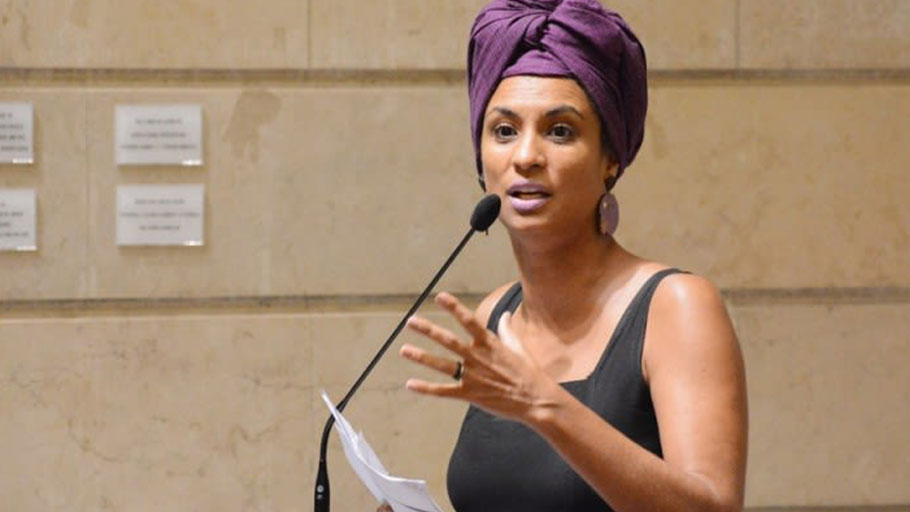 Marielle Franco, 38, a black politician from Rio de Janeiro, died fighting for the rights of women and favela dwellers. As a councilwoman from the Maré favela, she denounced the police brutality that favela residents, most of them black, regularly experienced.

On Wednesday around 9:20 p.m., armed men gunned the councilwoman down in her car in the center of Rio de Janeiro with nine shots—four to the head. Her driver, Anderson Pedro Gomes, also died. She had just left an event that she organized about black women’s empowerment.

Her death touched so many people that supporters organized vigils and protests in more than 20 cities across Brazil. Most of these protests were against the genocide of black people in Brazil. For Afro-Brazilians, Franco proved that a black person from a favela could be educated, have dignity and also fight against the social injustice that they suffer from every day. For women, she proved that they could overcome sexism and machismo in Brazil. But her death is hitting Afro-Brazilian women, who suffer the most from Brazil’s violent, racist and sexist society, the hardest.

Thousands of people gathered in front of Rio de Janeiro’s council chambers to pay homage to Franco, who was buried Thursday night. To show their digital support for her, Brazilians are changing their Facebook profile photos to those of Franco and using the hashtag #MariellePresente, which translates to “Marielle is here.”

Amnesty International, the longtime leader of a campaign against the genocide of black people in Brazil, demanded that her death be rigorously investigated. With those nine shots, Franco became one more statistic in this genocide. Just over 50 percent of Brazil’s population of 200 million is black. But blacks account for 2 out of every 3 murders. They are also overrepresented in favelas where violence and murder of blacks by police are rampant. Last year, the Rio de Janeiro police force killed more than 1,000 people. Black women in Brazil also disproportionately suffer violence—a recent study revealed that young black women are twice as likely to suffer from murder as their white counterparts.

In September of 2016, Franco received the fifth-most votes—more than 46,500—to became a councilwoman representing the liberal Socialism and Liberty Party (PSOL) in Rio de Janeiro. Her win was remarkable because she grew up in Maré, one of Rio de Janeiro’s poorest and most dangerous favelas.

Franco was the only black female representative and one of seven women on the 51-seat council. During her campaign, which was branded with the feminist color of purple, she spoke openly of her favela beginnings and introduced 50 ideas to help women, Afro-Brazilians and favela dwellers. She maintained her campaign promise to help these populations, served as the president of the House Committee on Women and led a committee that monitored Rio de Janeiro’s military intervention.

“When she became a councilwoman, she continued to radically fight for the black population who suffer extermination in this country,” said Maria Angela, vice president of the PSOL political party in Minas Gerais. “She never forgot that she was a black woman from the favela. She didn’t align herself with politicians who opposed her values and the population that she represented.”

It is widely believed that her death is connected to her stance against police violence. Four days before her murder, Franco publicly called a police battalion unit known for its brutality the “murder unit” and accused it of physically harassing people in a particular favela. The day before her death, she used her Twitter account to acknowledge the death of a young man who was killed by the police as he was leaving a church in a favela.

Translated to English, the tweet reads, “Another death of a young man at the hands of the police. Matheus Melo was leaving church. How many more need to die for this war to end?”

She continued, “What is happening in Acari is absurd! It’s always been happening! The 41st battalion of the military police is known as the battalion of death. This is the beating of the population. This is the killing of our young people!”

Flavia Oliveira, a respected black columnist for Globo’s newspaper, described the gunshots inflicted upon Franco as shots against the skin of the black woman, the favela dweller, the sociologist, the defender of human rights, the elected representative.

“Marielle was a black woman who worked on behalf of the community. Instead of selfishly caring for her own life, her daughter and her companion, she wanted to improve a society that is as unequal as it was violent,” wrote Oliveira in a column entitled, “Multiple murders in just one.”

Nascimento, still visually shaken from Franco’s death, remembered that Franco decided to pursue human rights because she lost her best friend to gun violence in the favela. “She managed to unite people across class and race boundaries while still staying true to her work on behalf of people in favelas,” Nascimento said. “We are talking about a brilliant black woman, who represented so many people. But this is what Brazil does. The people who are progressive in Brazil are not respected and they are killed.”

Marielle leaves behind a partner and a teenage daughter.

I am not free while any woman is unfree, even when her shackles are very different from my own.

Before white people can cash in on legal weed, Wisconsin needs to provide reparations for black communities

Before white people can cash in on legal weed, Wisconsin needs to provide reparations for black communities
We Need Your Support — Donate, Share, Sign-Up Ways to Support