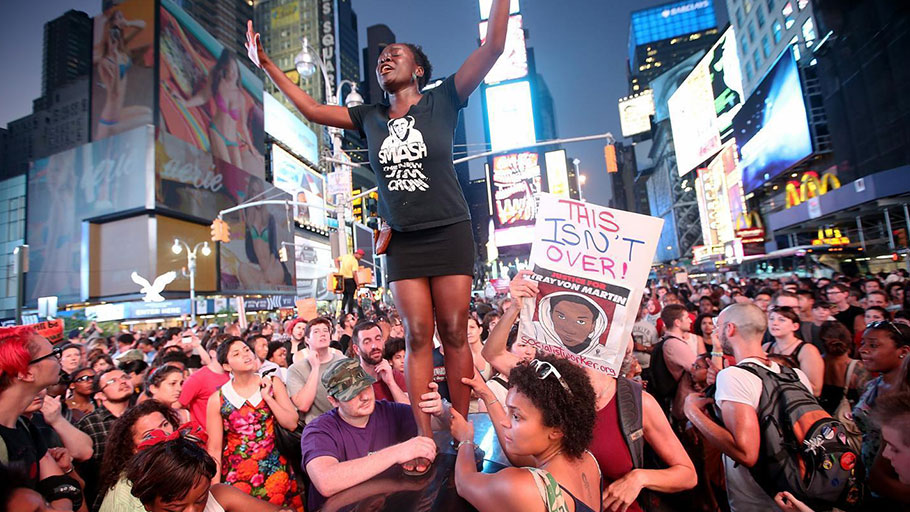 Black Lives Matter: 5 Years on, What Has the Movement Achieved and Where Will It Go From Here?

You Are Here: Home » Blog » Commentaries/Opinions » Black Lives Matter: 5 Years on, What Has the Movement Achieved and Where Will It Go From Here?

Trayvon Martin supporters rally in Times Square while blocking traffic after marching from a rally for Martin in Union Square in New York, on July 14, 2013. George Zimmerman was acquitted of all charges in the shooting death of Martin on July 13, 2013. Many protesters challenged the verdict. MARIO TAMA/GETTY

Black Lives Matter. It has been five years since Patrisse Khan-Cullors, now 34, first shared those three words on Facebook, reminding Americans that black lives do matter at a time when it felt like they did not.

News that George Zimmerman, 34, had been acquitted of all charges in the fatal shooting of 17-year-old Trayvon Martin sent shock waves across the U.S. on July 13, 2013, sparking widespread grief and outrage, especially among black communities in the U.S.

The black teenager had been carrying a drink and a bag of Skittles as he walked from a convenience store to his father’s fiancee’s home in Sanford, Florida, where he had been staying for a visit.

His life was cut short when Zimmerman, a neighborhood watch coordinator, spotted Martin in the neighborhood and called 911 to report a “suspicious person.”

Despite being told by a police dispatcher not to follow Martin, Zimmerman chose to do so anyway and at some point, an altercation between the two ensued.

It ended when the 34-year-old pulled a gun on the teenager, shooting him in what he later claimed was an act of “self-defense,” cutting his young life short. 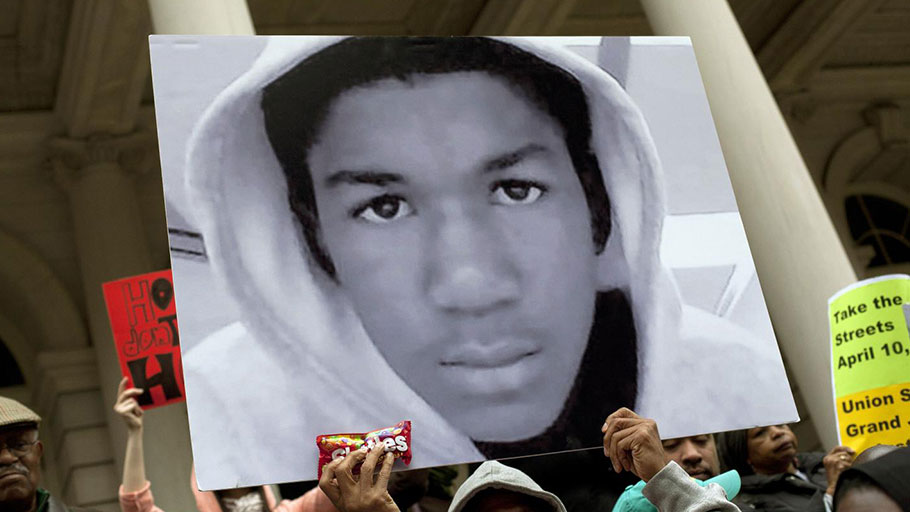 People attend a press conference along with New York City Council members to call for justice in the February 26, 2012, killing of 17-year-old Trayvon Martin in Sanford, Florida, on the steps of City Hall, in New York, on March 28, 2012. ALLISON JOYCE/GETTY

In response to Zimmerman’s acquittal, community organizer Alicia Garza, who would go on to become a co-founder of the Black Lives Matter (BLM) movement, wrote a Facebook post that she would later describe as a “love letter to black people.”

“Black people, I love you. I love us. We matter. Our lives matter,” she wrote.

Khan-Cullors, who would join Garza and friend Opal Tometi in co-founding BLM, was able to capture the sentiment in a hashtag that continues to define the movement five years later: #BlackLivesMatter.

“We saw that there was a gap in our dialogue, in our infrastructure around black people. There was a serious gap,” Khan-Cullors told Newsweek.

“And so, we inserted this conversation and really forced people in our movement and outside of our movement to reckon with anti-black racism, and I think we succeeded,” she said. 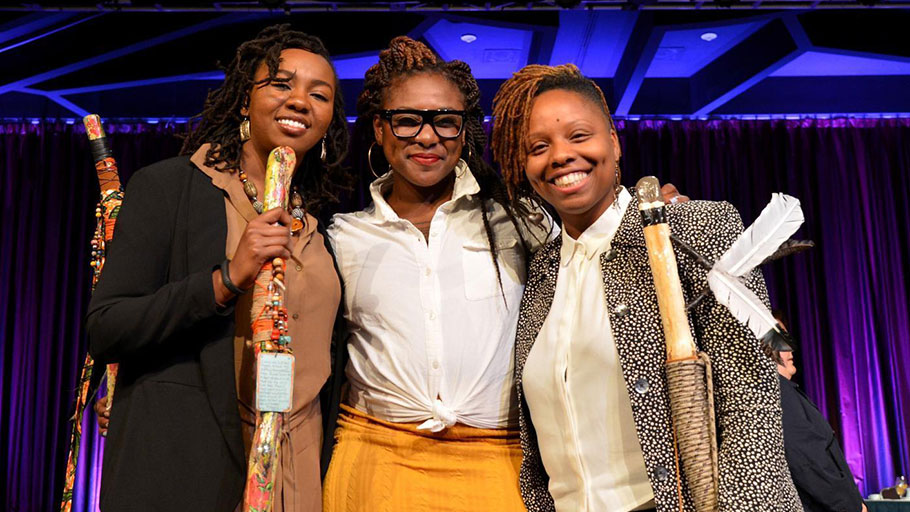 In the years since, BLM has come to represent and rally behind scores of cases involving racism, violence and police brutality toward black people.

“We’ve been on the front lines of supporting families who never received support before and created an environment for victims of police violence to have a voice,” Khan-Cullors said.

Khan-Cullors said BLM has also demonstrated time and again that it is an intersectional movement that has “created an avenue to talk about” other vulnerable communities, including the LGBTQ community and those affected by mental health issues.

“We always talk about the moment someone is killed, but what about what happened to them before being murdered by police? Where was our local government then? Why were they in such despair?” Khan-Cullors said.

“Why weren’t they getting the mental health help they deserved? I think those are the questions we should be asking ourselves.”

One such case is that of Deborah Danner, a 66-year-old woman with schizophrenia, who was fatally shot in her own Bronx apartment on October 18, 2016, by New York Police Department Sergeant Hugh Barry minutes after he responded to a call from a neighbor reporting that Danner had been behaving erratically. 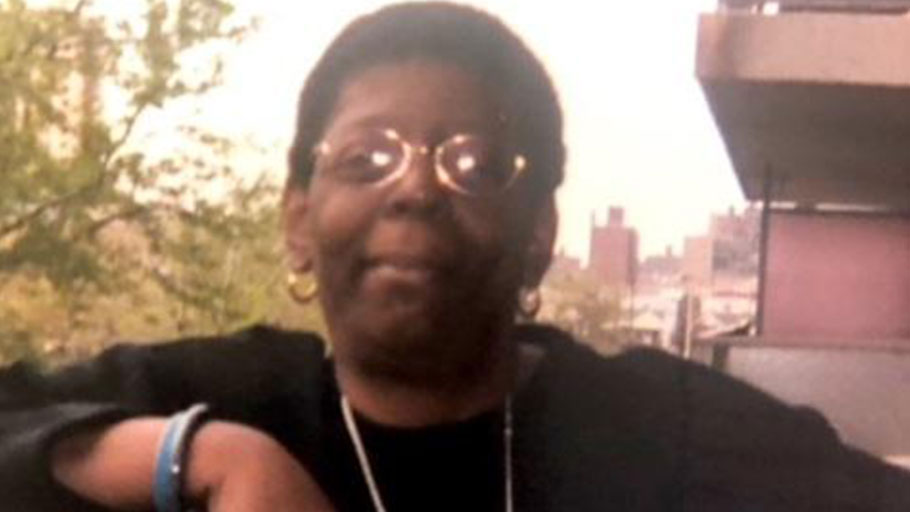 Deborah Danner, 66, was shot and killed by New York Police Department Sergeant Hugh Barry on October 18, 2016, in her apartment after a neighbor called police reporting that she was behaving erratically. JENNIFER DANNER

Related: Black Lives Matter: Deborah Danner is one of many who did not have to die

In February 2017, Barry, who is white, was acquitted of murder and manslaughter charges over the killing, leaving Danner’s family and BLM activists still searching for justice.

“I would like to see Sergeant Barry fired,” Jennifer Danner, the victim’s sister, who was there the day her sister was killed, told Newsweek. “That’s what I would like because he did not act properly. The other four cops were there. Nobody drew their gun.”

“Then Sergeant Barry and his driver came, and they had coaxed her out of her bedroom,” said Jennifer Danner. “And five minutes after he arrived, she was shot.”

“I don’t think there has been justice for the death of my sister,” Jennifer Danner said. “She was shot and killed by the police because she was mentally ill.”

Hawk Newsome, a civil rights activist and founder of Black Lives Matter of Greater New York, an unofficial chapter of the BLM movement, told Newsweek that BLM has been able to leverage social media as a way to build heightened awareness around racism and violence toward black people.

Newsome, who has campaigned on behalf of the Danner family, said, “With the use of technology, we’re able to pump out instances [of documented violence or racism toward black people] and spread them via social media that would have been swept under the carpet before.

In cases such as the July 6, 2016, fatal police shooting of Philando Castile, social media played a crucial role in creating evidence and shining a light on violence.

Castile’s girlfriend, Diamond Reynolds, gave the world a wake-up call when she posted a Facebook live stream showing the horrific moments after her boyfriend was shot by Minnesota police officer Jeronimo Yanez after reaching for his wallet during a traffic stop. 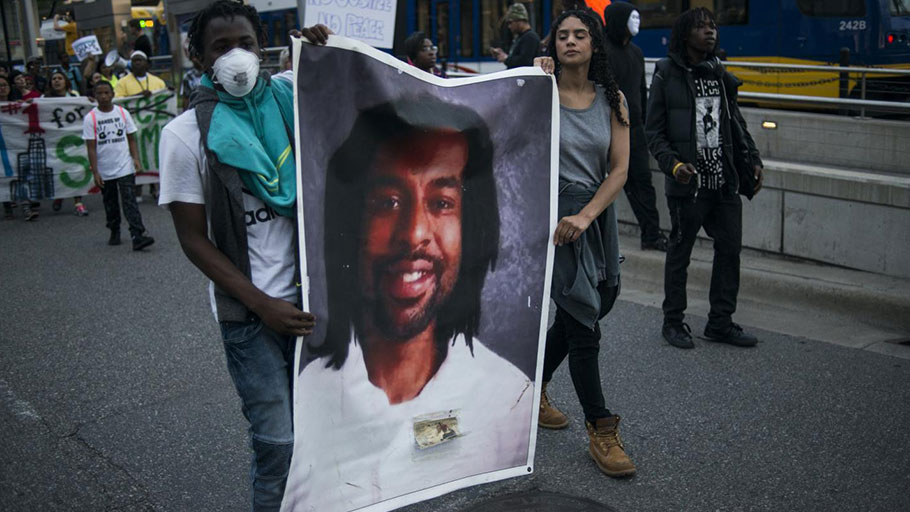 Protestors carry a portrait of Philando Castile on June 16, 2017, in St. Paul, Minnesota. Protests erupted in Minnesota after Officer Jeronimo Yanez was acquitted on all counts in the shooting death of Castile. STEPHEN MATUREN/GETTY

Reynolds not only documented the incident, but she also forced viewers to confront the reality that something as benign as going for a drive with your loved ones as a black person in the U.S. could suddenly turn deadly if you make a sudden move during a traffic stop.

In recent months, social media has been flooded with hashtags shining a light on black people being arrested or having police called on them for doing seemingly innocuous things.

The hashtags #BBQingWhileBlack, #MovingWhileBlack, #NappingWhileBlack and simply #LivingWhileBlack have prompted calls for the U.S. to address the apparent abuse of police authority that has seen predominantly white callers reporting black people for going about their lives.

American Civil Liberties Union (ACLU) Deputy Legal Director Jeffery Robinson told Newsweek that the use of social media to heighten awareness around racism and police violence toward black people has given the U.S. a “Naked Lunch moment.”

Related: Black Lives Matter: America is having a Naked Lunch moment on violence toward black people

“Social media plays a big part in this, in what William S. Burroughs, the Beat Generation author, described as a “Naked Lunch moment,” Robinson said.

“When Burroughs was asked what that means, he said it’s the moment when everybody has to look at what is really on the end of their fork. So America is having a Naked Lunch moment with policing,” the ACLU deputy legal director continued.

“We’re having to really look at what’s on the end of our fork, and it’s not pretty,” he said.

Khan-Cullors said she believes things could become even uglier with President Donald Trump in the White House.

Calling the Trump administration “one of the greatest threats to American democracy,” the BLM founder said she believes the president’s time in office will have a “grave impact” on the movement and discourse around civil rights in the U.S. 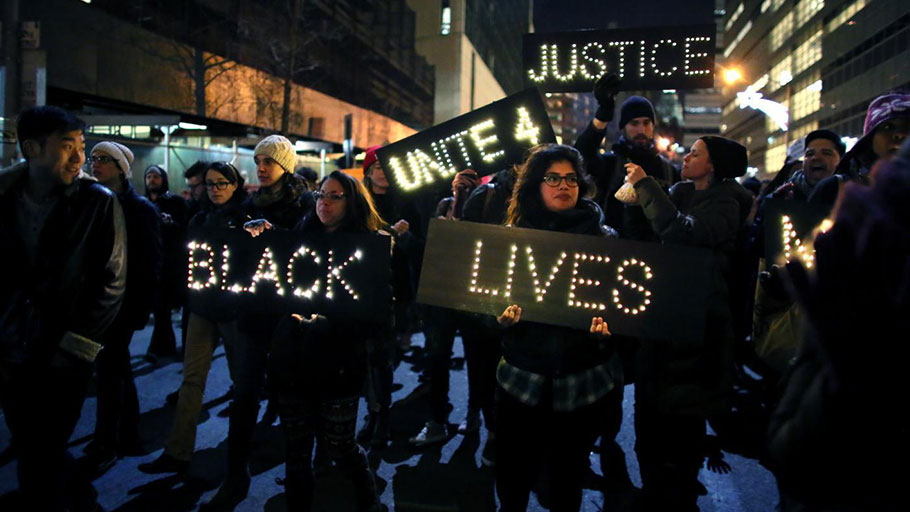 Marchers approach the West Side Highway during a protest, in New York, on December 4, 2014. Protests began after a Grand Jury decided to not indict NYPD Officer Daniel Pantaleo. Eric Garner died after being put in a chokehold by Pantaleo on July 17, 2014. YANA PASKOVA/GETTY

“This is a person who has very little, no compassion, for communities most marginalized,” Khan-Cullors said.

“This administration is going to impact immigration policy. It’s going to alter the state of employment or lack of employment, the policies around women’s bodies and trans people. They’re setting into place…a whole entire government and an environment that impacts us for generations to come.

“This is a moment where all of our movements should be joining together to fight up against, really, one of the greatest threats to American democracy,” Khan-Cullors said.

The BLM founder said she believes that in the next five years, the movement will see a “solidifying” of its network as an “institution that has to be reckoned with.”

When They Call You a Terrorist

However, Khan-Cullors said she also expects to see a “continual undermining of our organization from the government” and other critics.

Since it began five years ago, the BLM movement has had its share of detractors, including law enforcement heads, with one North Carolina police chief, Mike Halstead, forced into early retirement after calling BLM a “terrorist group.”

“This Black Lives Matter group is nothing more than an American-born terrorist group brought on by the lie of the ‘Hands up, don’t shoot’ during the criminal thug Michael Brown incident,” Halstead said, according to The Washington Post.

Halstead was not the only one to equate BLM with “terrorists.” David Duke, a former leader of the Klu Klux Klan, thanked Trump for “condemning the leftist terrorists in BLM” after the president repeated his assertion that “both sides” were to blame for violence during a white supremacist rally in Charlottesville, Virginia, that left one woman dead.

Khan-Cullors said criticisms of the movement equating it with terrorist groups were “shameful,” but also not surprising.

“I mean, it’s disturbing, it’s unfortunate, it’s unacceptable. It’s shameful—and it’s typical. We’re part of a legacy of freedom fighters and part of the legacy is also being undermined by your government. So, we know that’s part of the legacy.”

Despite its detractors, Khan-Cullors said she believes BLM will only continue to grow to become a “formidable institution inside the U.S., but also outside of the U.S.”

“I think in five years, we’ll have launched a multinational campaign, one [goal] of which will be to adequately support black folks with mental illness so that they don’t end up being vulnerable and killed by law enforcement.