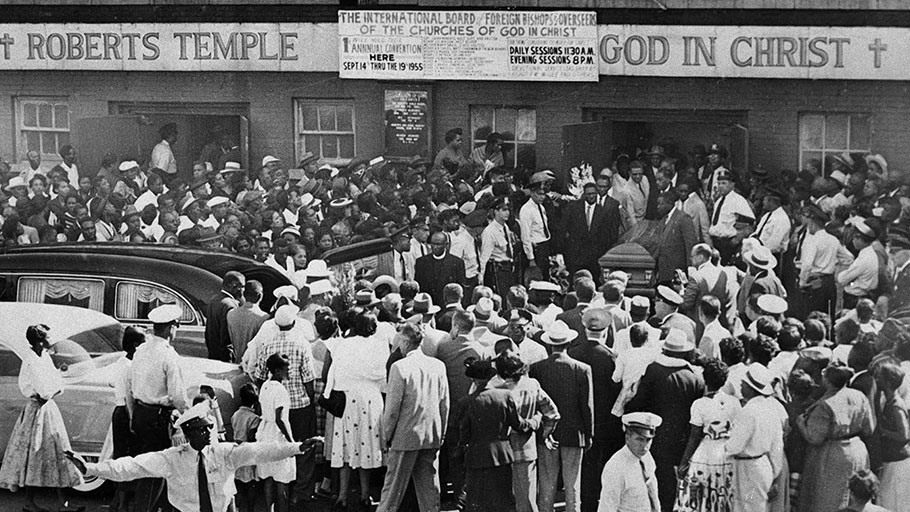 Why Emmett Till Won’t and Shouldn’t Die

You Are Here: Home » Blog » Commentaries/Opinions » Why Emmett Till Won’t and Shouldn’t Die

The news that the Justice Department will take another look at the Emmett Till case stirred the never-ending memory I have of that September day in 1955. That was the day of Till’s funeral at Roberts Temple Church of God on Chicago’s Southside. Then I lived only a few blocks from the church. The elementary school I attended was also close to the church. Till’s family lived only a few blocks from my house.

I still remember the sometimes hushed, and sometimes excited talk in my household about Till in the days before his funeral. I knew that something horrendous had happened, something almost unspeakable to his family. The day of the funeral my father announced that he was going to pay his respects to the family. My father stood in the line outside the church that seemed to stretch to infinity. This was no ordinary funeral but an event, and as we now know, a racial game changing historic event. Till’s mother demanded that her son’s casket be open. She made it clear why. She wanted the world to see what they did to her boy. The “did” was the lynching and his horribly battered, totally disfigured body. The “they” were a pack of maniacal, murderous, vengeful white men who instantly with the lynching of Till put the backwater town of Money, Mississippi on the global map.

The sight of Till’s battered body shocked my father. I still remember that vacant, near traumatized look on his face when he came through the door after viewing Till’s body. He just sat there quietly shaking his head. I did not understand then the pain and suffering that he and the thousands who viewed Till’s body that day felt. But I knew as I watched him after he returned from the church that this was a death that hit him and others in the neighborhood hard. It was collective agony and suffering, that he and other Blacks on my block, and throughout Southside Chicago, and the nation deeply felt.

If ever there was a racial lynching case that screamed for federal action it was the Till case. The instant the story broke nationally, black leaders demanded that the Justice Department and the FBI act. This was the right demand to make given the absolute refusal of white Southern sheriffs to arrest whites suspected of racial murders. In the rare cases they were arrested, all-white juries refused to convict them.

The Till case was not an exception. In a farce of a trial, the two white men that killed him were quickly acquitted. But that was not the end of it. The murder continued to send political shock waves across the nation. Black leaders, labor organizations, and numerous public officials implored the Justice department to act. Even then there was strong suspicion that others were either directly involved in the murder or had knowledge of the killing.

Yet Justice Department officials still refused to do anything. They claimed that state officials were solely responsible for prosecuting racially motivated crimes, and if they refused or conducted a farce of a prosecution as was the case with the Till murder, there was little they could do about it. This, however, was blatant legal evasion.

Federal statutes gave the Justice Department the power to prosecute individuals on civil rights charges when state prosecutors either failed to bring charges, or conducted a weak, ineffectual prosecution that resulted in acquittals.

Till was abducted at gunpoint. That made it a kidnapping case. This automatically gave federal authorities jurisdiction over the case. They could have easily brought civil rights charges against the two principal defendants and any others who were suspected of complicity in his murder.

Till, though, was not solely a victim of a racist, and hostile white jury. He was also the victim of a racially indifferent federal government. In the pre-civil rights era, presidents and their attorneys general generally ignored or sparingly used the federal statutes to prosecute criminal civil rights cases abuses. This had less to do with the personalities, individual preferences, or even racial bigotry of the men in the White House and the Justice Department than with political expediency. They were determined not to offend the politically powerful South. While the Till case sparked anger and garnered lots of press attention, in that era of Jim Crow segregation, it was still not enough to move federal officials to act.

The murders of Till are long dead and the woman, Carolyn Bryant, who claimed that Till harassed her has recanted her “lie” that proved to be Till’s extra-legal death sentence. The one attempt made in 2007 to bring charges against her for her role in the lynching crashed when a Mississippi Grand Jury refused to indict. The Justice Department now claims it has new information about the case to reopen the investigation. Let’s hope so.

Reopening the investigation into the Till case and other old racial murders tosses another ugly glare on the period in the South when blacks were murdered with the tacit approval of Southern state officials, and the blind-eye of federal officials. That’s a good thing. It’s one more reason why the Till case shouldn’t die.

Earl Ofari Hutchinson is an author and political analyst. He is the author of the forthcoming Why Black Lives Do Matter (Middle Passage Press). He is a weekly co-host of the Al Sharpton Show on Radio One. He is the host of the weekly Hutchinson Report on KPFK 90.7 FM Los Angeles and the Pacifica Network.