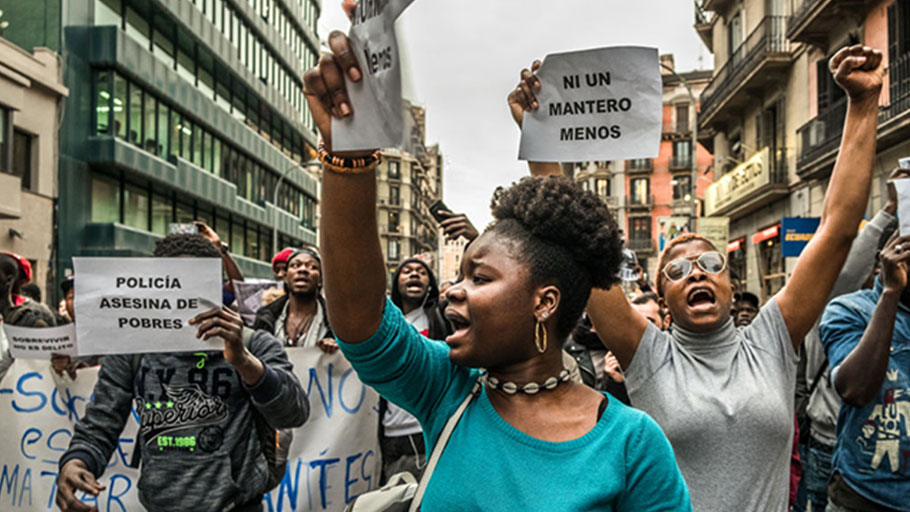 Women demonstrate with street vendors in memory of Mame Mbaye in Madrid, Spain, on March 16, 2018. Hundreds of people, mostly black, protested in Barcelona by the death of Mame Mbaye, street vendor in Madrid who lost his life after the harassment by the municipal police of Madrid. Photo: Paco Freire, SOPA Images, LightRocket via Getty Images

The #MeToo movement in the United States is one of the contemporary expressions of women’s political power and evidence of women’s commitment to dismantling systems of oppression that give rise to sexual harassment and assault. The fact that a Black woman founded the movement is not surprising; especially considering the crucial role Black women have always played in shaping US and global politics.

During the 20th century, a dynamic group of Black nationalist women similarly resisted all forms of harassment and discrimination. At a moment in which people of African descent were being denied full citizenship and human rights, these women were at the forefront of Black political movements.

One of the most important aspects of these women’s political vision was their commitment to Black internationalism. Building upon a long and rich tradition and history dating back to the age of revolution, Black nationalist women maintained a global racial consciousness and commitment to universal emancipation. They understood that the struggle for Black rights in the United States, as well as the fight for Black political self-determination, could not be divorced from the global struggles for freedom in Asia, Europe, Africa, Latin America and the Caribbean, and other parts of the globe.

To that end, Black nationalist women employed various strategies and tactics and utilized numerous avenues to disseminate global visions of freedom and build transnational alliances with other people of color across the globe. In the 1930s and 1940s, Black nationalist Mittie Maude Lena Gordon used her organization, the Peace Movement of Ethiopia (PME), as a platform for advancing Black internationalism. While advocating for Black relocation to Liberia — to escape racism and dissemination in the United States and unite people of African descent in the diaspora — Gordon also worked to advance the cause of universal Black liberation. Through her writings during this period, which circulated in Black nationalist circles in the United States and abroad, Gordon condemned imperialism, calling for all European colonies to be “free of all whites.”

From her base in Chicago, she worked to build transnational alliances with a diverse group of activists. Her efforts to collaborate with Nigerian nationalist Akweke Abyssinia Nwafor Orizu during the early 1940s further exemplify her support for the anti-colonial movements of this period. Orizu would later become acting president of Nigeria in the 1960s. A staunch proponent of African liberation from European colonialism, Orizu worked alongside other African students studying in the United States during the 1940s, including Kwame Nkrumah, future prime minister of Ghana.

In December 1940, after reading about Orizu in the Richmond Times, Gordon invited him to speak before an audience of PME supporters. For 10 days in March 1941, Orizu held a series of public meetings with Gordon and her supporters addressing a range of topics, including African history, emigration and African independence.

The outbreak of World War II marked a turning point in Black nationalist women’s political activism. Like many other Black activists during this period, Black nationalist women viewed the war as a pivotal opportunity for people of color to confront global white supremacy and secure economic and political freedom. Writing in 1942, Gordon reflected on the challenges that Indians endured under European colonialism and staunchly declared, “When India is free all colonial people and subjects throughout the world will be free.” In a subsequent letter, she emphasized the link between the challenges facing African descended people and the plight of Indians. “The complete freedom of India will bring complete freedom to the American Black people, because the same men are holding them in slavery,” she argued.

Throughout the United States, many Black nationalist women shared Gordon’s internationalist vision. In 1942, Josephine Moody, a member of Marcus Garvey’s Universal Negro Improvement Association (UNIA) in Cleveland, Ohio, called for an immediate overthrow of the global white power structure. “The bleeding wound of Africa is wide open,” Moody argued, “and the nations of the world keep the wound from healing, and we, the Negro must be our own physician to effect a healing of that wound.” The liberation of Africa, Moody continued, would only come by force: “We want to set the world on fire, we want freedom and justice and a chance to build for ourselves. And if we must set the world on fire … we will, like other men, die for the realization of our dreams.”

The ideas expressed in Moody’s article informed Black nationalist women’s political praxis during the 20th century. This was certainly the case for Amy Ashwood Garvey, the first wife of Marcus Garvey, who helped to establish the UNIA in Jamaica in 1914. Like many other Black nationalist women during the 20th century, Ashwood maintained a commitment to Black internationalism. In her extensive travels throughout the United States and other parts of the globe, Ashwood actively pursued diverse political alliances, often crossing racial, geographical and gender lines. At the 1944 “Conference on Africa – New Perspectives,” organized by the Council of African Affairs (CAA), Ashwood endorsed Black internationalism, arguing that Black people needed to “broaden our vision and broaden our policy to include other groups of people who have been suffering as we have suffered.”

Expressing similar views, Amy Jacques Garvey — Marcus Garvey’s second wife and Black nationalist leader — articulated a vision of Black internationalism. “The ties of blood that bind us transcends all national boundaries,” she argued in a 1945 article. “The differences of languages and dialects are being overcome,” she added, “as all of us are learning the language of freedom.”

Her comments captured the global visions of Black nationalist women in the 20th century. Through shared strategies of resistance and transnational collaborations, these women worked to secure Black economic and political freedom. For these activists, Black internationalism was the ultimate key to dismantling racism, imperialism and global white supremacy.

Keisha N. Blain teaches history at the University of Pittsburgh. She is the author of Set the World on Fire: Black Nationalist Women and the Global Struggle for Freedom (University of Pennsylvania Press, 2018). Follow her on Twitter: @KeishaBlain.