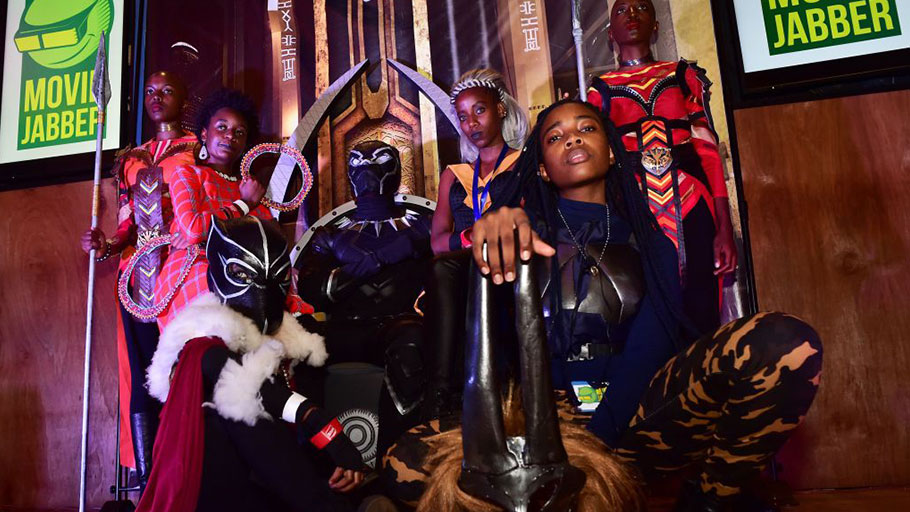 You Are Here: Home » Blog » Commentaries/Opinions » “Black Panther”: Rip Off the Racial Mask

Cosplayers portraying characters from the 2018 US superhero film based on the Marvel Comics character, Black Panther, pose in the Kenyan capital, Nairobi on February 14, 2018. (Photo: Tony Karumba / AFP / Getty Images)

Was this the Promised Land? Black people partied on the escalator. I was going to my seat and asked if the movie was good. “Yooo,” they cheered; a teen mimed a silent explosion from his head. We laughed and slapped hands.

Black Panther is more than a film. For two hours, it lets us leave the imagery of people of color as problems or victims.

The cinema looked like an international airport. Parents in dashikis, posed for selfies with kids in tribal face paint. Young men, flashed cowrie shell necklaces. Women fluffed afros. Here was Black joy. Here was Black pride. The doors opened and the staff scanned tickets like passports to escape the US.

Marvel’s new Black Panther is more than a film. For two hours, it lets us leave the imagery of people of color as problems or victims. Against racist contempt for us or liberal pity, Black America is embracing a nationalist version of Afro-Futurism, in which technology and heroism define us. Even as we wore costumes to the theater, we came to take off our masks.

Before the film began, I looked at the brothers and sisters in Black Panther costume and thought of my trip to the National Museum of African Art. A year ago, nose near the glass box, I studied centuries-old outfits and ceremonial masks that invited the spirit to possess the wearer.

In contrast, hours ago, I taught in my Harlem Renaissance class a James Weldon Johnson poem where he wrote, “We wear the mask that grins and lies.” It was a magnifying glass for how we, people of color, hide our true selves to survive in the US. Black people have expressed in art the anxiety at biting one’s tongue at racism or clowning to ease white people’s fears. Behind the “mask,” rage poisons the body it’s bottled up in.

Some masks free us. Some disguise us and some protect us from harm. The premiere of Black Panther allowed us to take off the masks we wear for protection and put on the ones that make us free.

Black Panther dramatizes this conflicted use of the mask. It begins with a bright meteor, smashing into a valley in Africa. Pulsing with energy, it transforms the local flora. One man eats an affected plant and becomes an enhanced being who unites the warring tribes into the nation of Wakanda.

The new king wears a black panther’s guise. He hides Wakanda under a hi-tech hologram to protect the meteor’s powerful metal, vibranium, from exploitation by the West. Again, the mask has a double meaning: a connection to a secret power and a way to disguise it from enemies. It repeats a traditional trope in Black art, where the central conflict is between one’s true self and the need to conceal it from those that would destroy it.

I’ve watched Black people as slaves, criminals or victims since my earliest movie-going.

This conflict tears families apart. Early on, a modern monarch, King T’Chaka (played with stately grace by John Kani) in Black Panther suit and mask confronts his brother, Prince N’Jobu (a pensive Sterling K. Brown) in Oakland. The prince pleads that Wakanda must come out of isolation and rescue Black people oppressed in the West. The king says, no. They struggle, and N’Jobu is killed. The king hides the murder, but his brother’s son, little Erik, watches T’Chaka leave in a Wakandan jet.

The boy is us. His upward gaze at the royal family abandoning him is the other major trope in Black art:  We’re an exiled people in search of a home. Jamaican Rasta prayed to leave Babylon and go to Zion. Marcus Garvey bought ships for the Black Star Line to return us to Africa. And Malcolm X demanded we leave “the wilderness of North America” and get our own land. Afro-Futurists made art that imagined a hi-tech, future home. For instance, artist, musician and philosopher Sun Ra, a pioneer of Afro-Futurism, created a 1974 film titled Space Is the Place. And now, we have Wakanda, a gleaming, sci-fi African city of Tomorrow. All of it repeats a long-standing, deep mythos that like Erik, we are strangers in a strange land. We want to take off the mask and come home.

During a slow scene, I whispered to my friend, “I watched 12 Years a Slave but nobody got dressed as a slave for the premiere.” She shook her head, “No. I don’t think the theater would appreciate us running around barefoot in chains.” Someone shushed us. It struck me that I was so thirsty to see Black Panther because I’ve watched Black people as slaves, criminals or victims since my earliest movie-going.

In high school, I saw a man lynched in a class showing of The Autobiography of Miss Jane Pittman. In Roots, Amistad and Glory we were slaves. In the ’90s hood movies Boyz n the Hood, Menace II Society, Juice and New Jack City, brothas were shot left and right. Sometimes, the gunfire was real, as gangs fought in theaters over petty beef. In the media, I’ve seen Black bodies whipped, raped, sold, beaten, shot and insulted throughout my life. And it was liberals who wanted me to see it.

Black pain sells liberalism. In his 1997 book Contempt and Pity: Social Policy and the Image of the Damaged Black Psyche, Daryl Michael Scott dissected how activists across the political spectrum used Black damage imagery to promote their ideology. He wrote, “Liberals proceeded as if most whites would have been willing to grant black people equal rights … if they were made to appear psychologically damaged. In so doing … they reinforced the very belief system that made whites feel superior in the first place.” Showing us damaged by slavery, prison and insult was key for liberalism. Whippings, gangs, single-parent homes and abuse are the vocabulary of Black damage imagery.

White liberal savior movies, from Freedom Writers to Amazing Grace to The Help need Black pain to guarantee their morality. They also lock us into a toxic image of damaged helplessness. Against this liberalism, we created nationalism and Afro-Futurism. Black artists and mystics from Noble Drew Ali to Octavia Butler, Jonelle Monae to Marvel’s Black Panther showed a new identity, emerging within a new future. Instead of victims or problems, we create space-faring civilizations and the stars are close enough to touch.

On the surface, it seems that Black Panther has opted out of damage imagery. T’Challa (a poised Chadwick Boseman) is T’Chaka’s son and crown prince. After seeing his father’s death, he returns to Wakanda to ascend the throne. The kingdom is prosperous, hi-tech and the people rejoice at his coronation. It seems absolutely ideal.

We don’t need to see Black Panther to find our strength. We just need it to show us who we already are: a people strong enough to challenge an empire.

Yet the damage is present but purified from the audience through a cathartic identification with T’Challa. When he fights, we fight with him. When he attacks Boko Haram-style smugglers who traffic women, we’re purified of the African warlord stereotype. When he walks with swagger in next-level tech gear, we’re purified of the primitive Black stereotype. And when he visits his father T’Chaka in the spirit world and questions the tradition of hiding Wakanda, we can ask if it’s time to take off our mask and show our glory.

Ultimately, the central conflict comes when Erik Killmonger (an excellent Michael B. Jordan) challenges T’Challa for the crown. He is the lost son of Prince N’Jobu, grown and driven by rage to seize Wakanda’s vibranium weapons and unleash war against the West. Like his slain father, he wants to rescue all oppressed Black people. He is a deeply intimate portrayal of Black damage that seeks ruthless revenge for all the death and slavery and imprisonment visited upon it. I loved him more than T’Challa.

Killmonger and T’Challa fight. Two sides of the same diasporic soul, slashing each other in nearly identical Black Panther suits. One wanting war, the other wanting reconciliation. Falling into the vibranium mine pit, T’Challa shouts, “We can’t become the monsters we fight.”

We can, but we don’t, because it’s a Marvel movie. Liberal Hollywood morality needs for Erik to be killed. In his last moments, the Black Panther takes him to the ledge so he can see his last sunset in his true homeland.

“Bury me in the ocean with my people,” Killmonger asks, “they knew death is better than bondage.” He dies and the implicit hope of the narrative is that some of our rage dies with him.

School groups are going to see this film. Families and church groups are going. Celebrities like Kendrick Lamar are buying tickets for the poor. Millions of Black people fill the theaters, popcorn in lap, traveling to a fictional world that reflects our real desires. A new exodus is underway — not physical, but spiritual, to find a heroic Blackness, cleansed of racism that can protect itself. It is needed now because we are under attack.

Nowadays, Neo-Nazis parade through towns, beating and killing. The president is openly racist. His attorney general wants to continue and expand the drug war. Whole swaths of the American public put bigots into office to use state power against people of color and immigrants. The West convulses in reaction to its loss of power.

The wonder of it all is that we fought and keep fighting. When our men and women were slain by police (as they continue to be), we marched through tear gas, carrying their names. We blocked highways. We were hit by cars and shot and beaten. We staged die-ins. We crashed political rallies. We voted to stop bigots from getting into office.

We don’t need to see Black Panther to find our strength. We just need it to show us who we already are: a people strong enough to challenge an empire. Our soul force outshines any law. Our Black Lives Matter youth are already heroes.

At the end of the movie, T’Challa unveils Wakanda to the world and promises to aid the refugees and the poor. He visits Oakland, where his nephew Erik was abandoned. It’s time to build outreach centers to rescue the lost children of the Diaspora. The film ends. A great cheer erupts. Our faces are bright, as if we stared into the sunset with Erik. And for those precious moments, we are home.