Citizenship once meant whiteness. Here’s how that changed.

You Are Here: Home » Commentaries/Opinions » Citizenship once meant whiteness. Here’s how that changed. 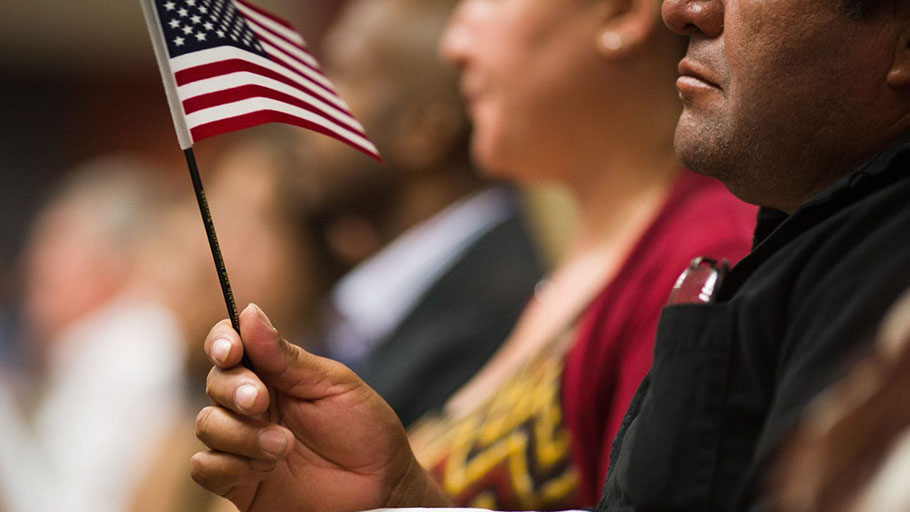 Detail of an American flag held by a newly naturalized citizen during a U.S. citizens naturalization ceremony in Atlanta on Aug. 10, 2016. (Kevin D. Liles, Washington Post)

Free people of color challenged racial citizenship from the start.

The country has spent days debating whether President Trump’s tweets telling four congresswomen of color to “go back” to their countries are racist. Although all four are U.S. citizens and three were born here, Trump’s tweets channeled a long American tradition of equating citizenship with whiteness.

But at this moment, we need to remember and reclaim another definition of citizenship: What makes someone American isn’t race but dedication to the country’s core principles of equality and justice for all. Enslaved people who fought to become free long before slavery ended in the United States exemplified that commitment to a country where everyone could lay claim to liberty and inclusion.

Their struggle was not an easy one. At the same time our Constitution was being ratified, framing the country’s identity and purpose as a beacon of liberty, slavery in the United States was expanding.

Pushing back against that expansion were people of color who fought to become free. In Virginia, the birthplace of the Constitution, many enslaved people gained their freedom in the early republic, as anti-slavery Quakers prodded the legislature to make emancipation easier.

Enslaved people took advantage of these openings in the law to claim freedom for themselves and their families. They overcame extraordinary obstacles to become free: working “overtime” on Sundays and late at night to earn wages to purchase freedom for themselves or loved ones; finding a lawyer to help them bring a lawsuit for freedom; taking depositions from white neighbors or family members attesting to their hard work and good character.

By the early 19th century, communities of free people of color were large enough to challenge many white people’s conceptions of black people’s “proper place.” Born in America, their “proper place” was in America, as citizens.

Their story is left out of most popular histories of the United States, which feature black slaves and white emancipators. Free people of color didn’t fit into the political agendas or ideologies of most American politicians at the time, either, all of whom were white men. Thomas Jefferson, who hoped that slavery would wither away, thought that freed people must be transported back to Africa. Why? Jefferson wrote that racial differences, prejudices and resentments would “probably never end but in the extermination of the one or the other race.”

White politicians clung to the idea of a “white men’s democracy,” tying political rights to white male identity rather than property holding or free status. In 1790, Congress had limited naturalization to “free white” persons, leaving out enslaved people, indentured servants and most women. In the 1830s, as Southern state legislatures expanded voting rights to all white men, they also discussed the need to “remove” freed slaves from their states. To them, free people of color challenged the neat equation of full citizenship for white men, degraded status for others.

The courts, too, tied the possibility of citizenship to whiteness. They defined a white man as someone who could vote, sit on a jury and participate in the military. They excluded free people of color from doing those things. Many white Americans also shared Jefferson’s dream of sending black people “back to” Africa, even if they had been in the United States for generations.

But others worked hard to prove Jefferson wrong. Free people of color such as Frederick Douglass and Sojourner Truth led the Northern movement to abolish slavery. In the South, they built churches, schools and a rich political tradition that they drew on after the Civil War to fight in the courts for the right for black Americans to participate in public life.

Free people of color played surprising roles in American public life. A militia of free men of color in Louisiana fought with valor for the United States in the War of 1812. Free men and women of color who migrated to the North published anti-slavery pamphlets and books. At political conventions throughout the South, they articulated a vision of birthright citizenship for men and women of all races. They rejected the “colonization” movement that sought to deport them to Africa.

Immediately after the Civil War, men of color ascended to public office and argued that freedom must include the right to vote and to participate fully in public institutions. The lives and work of free people of color contradicted the degrading Southern myth that people of African descent thrived only in slavery and that only white people could exercise the rights of citizens.

The struggles of free people of color prefigured the fights for civil rights that have occupied us ever since. Not only Southern but Northern states limited their rights to travel, join professions and receive the same education as white people. After the Civil War, the same limits were imposed even more widely and given the name Jim Crow.

This white rationale for citizenship was then applied to immigrants who came from China to mine for gold and build railroads. When they sought to bring wives and start families, they, too, were excluded from citizenship. Other immigrants — from Syria, Japan and India — had to pass the legislative test of proving they were “free white persons” to naturalize to citizenship. But those who couldn’t meet those whiteness standards, such as immigrants from India, lost their land and were deported.

We are still reckoning with the legacy of the injustices that tied citizenship with racial identity. The Trump administration has sought to undercount immigrant communities in the census, to slow naturalizations of immigrants and to detain and deport thousands more. Trump has even said he wants to end birthright citizenship, which is guaranteed by the 14th Amendment.

When politicians and presidents question the citizenship of people of color, they are tapping into the worst strain in American law and politics, equating citizenship to whiteness. We must draw instead on the tradition of Frederick Douglass and Sojourner Truth, who fought for justice and full citizenship for all Americans.