Criminal Justice Reform Is on the Midterm Ballot

You Are Here: Home » Commentaries/Opinions » Criminal Justice Reform Is on the Midterm Ballot 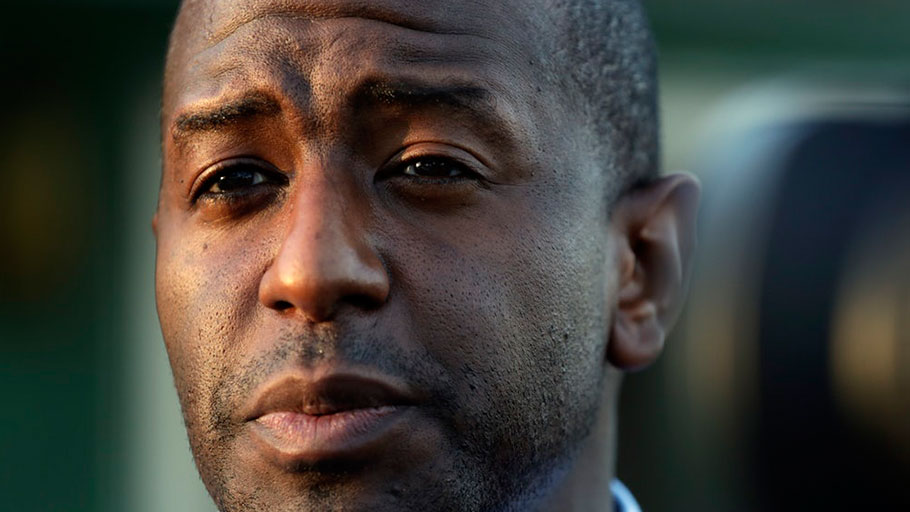 By Matt Ford, The New Republic —

Andrew Gillum wasn’t expected to win Tuesday night’s Democratic primary for the Florida governor’s race, even after he won Senator Bernie Sanders’s endorsement weeks ago. The 39-year-old Tallahassee mayor was outspent five-to-one by the frontrunner, and even more so by the two billionaires in the race, but he triumphed nonetheless—a key victory for the insurgent progressive wing of the Democratic Party. If he prevails in November, Gillum would be only the second black governor in the South since Reconstruction and Florida’s first Democratic governor since 1999.

In his victory speech, Gillum highlighted an issue that’s received short shrift from Florida policymakers in recent years. “Beneath my name is also a desire by the majority of people in this state to see real criminal-justice reform take hold,” he told a crowd of supporters at his Tuesday night victory rally. “The kind of criminal-justice reform which allows people who make a mistake to be able to redeem themselves from that mistake, return to society, have their right to vote, but also have their right to work.”

The message could apply anywhere in the United States. But it carries greater resonance in Florida, which ranks among the most carceral states in the union. While crime has plummeted nationwide since the early 1990s, Florida’s prison population hasn’t seen significant declines. Instead, the number of people serving more than ten years in prison tripled between 1996 and 2017. Lawmakers abolished parole for most crimes by 1993, which requires the state to keep many prisoners behind bars who don’t pose a danger to society. Even today, the state has shirked the broader reform-oriented trend on both the left and the right.

Gillum has campaigned on a platform that could change that. His campaign’s official site touts measures similar to those adopted in some Democratic-led states, like reducing the number of crimes that carry mandatory-minimum sentences and reforming the cash-bail system, which disproportionately harms lower-income Americans. Others are more bold: Gillum went further than his primary opponents and called for the full legalization, rather than just decriminalization, of marijuana. Though he told reporters he is not an opponent of the death penalty, Gillum said he would suspend executions to address concerns about racial disparities.

Florida may already be the most important battleground of the 2018 midterms. Bill Nelson, the state’s Democratic senior U.S. senator, is facing a strong challenge from Rick Scott, the incumbent governor, that could help decide control of the Senate. Eight of the state’s 27 congressional districts are currently considered to be competitive House races by the Cook Political Report. With Gillum as the Democratic nominee for governor, facing off against a Trumpist Republican nominee in U.S. Congressman Ron DeSantis, November’s elections will also be a referendum of sorts on criminal justice reform.

Nearby states with high prison populations have already taken steps to alleviate the problem in recent years. Texas’s incarceration rate has steadily declined since 2007 after lawmakers expanded diversion programs and drug courts. In April, Mississippi adopted changes to prevent people from automatically being sent to jail if they are unable to pay fines and court fees. Georgia Governor Nathan Deal signed a package of reforms into law in May that reduces punishments for low-level drug offenses, lowers the felony theft threshold, and sets aside funding for diversion courts.

Florida has bucked the reformist trend, however. In 2018 alone, state lawmakers rejected bills that would have given judges more discretion in sentencing for low-level crimes, reworked the state’s felony theft laws to prevent disproportionate sentences, created an oversight board for Florida’s correctional system, and reduced penalties for people with non-violent drug convictions. The legislature ultimately approved modest changes to the juvenile-justice system and a measure to improve criminal-justice data collection. But those efforts fall far short of what Florida’s neighbors already managed to enact.

State officials have also aggressively defended some of the system’s worst features. In February, a federal judge struck down Florida’s felon-disenfranchisement system for violating the First and Fourteenth Amendments. Florida is one of a handful of states that imposes a lifetime ban on voting for people with felony convictions after they complete their sentence. Those rights can only be restored by appeal to a panel selected by the state’s governor that rarely approves the requests.

As a result, more than 1.5 million Floridians who are otherwise eligible to vote can’t cast a ballot, warping the state’s electorate. (Gillum’s brother, he says, is one of them.) Scott persuaded the Eleventh Circuit Court of Appeals to stay the judge’s ruling while legal proceedings continue, leaving it intact for the 2018 midterms. But the legal fight may soon be moot: Florida voters will consider a constitutional amendment this fall that would eliminate felon disenfranchisement for all but murders and serious sexual offenses, which would restore full civic rights to hundreds of thousands of the state’s residents.

Other Democratic gubernatorial candidates have also called for sweeping criminal-justice in their states. Georgia’s Stacey Abrams, who would be the first black woman governor ever elected in America, grounds her approach in the experience of her brother Walter, who has bipolar disorder and developed a drug addiction. Instead of receiving treatment, he and tens of thousands of other Americans with major mental illnesses are regularly churned through the criminal justice system for committing crimes of survival like petty theft. Abrams’s platform focuses on improving alternatives to incarceration and bolstering reentry programs to improve the transition back into society.

Maryland’s Ben Jealous, a former president of the NAACP, would go even further. His platform calls for the full legalization of marijuana, the abolition of cash-bail programs, shifting the state’s parole powers away from the governor’s office and toward independent experts, and expunging criminal records for certain crimes to aid reentry and employment efforts. Among his more significant proposals is a state program to investigate prisoners’ claims of innocence. A commission dedicated to that task in North Carolina secured eight exonerations in its first nine years of existence.

A constant fear among reformers is that the political winds could turn back toward tough-on-crime policies after years of favorable weather. It’s unclear whether that will be a problem in Gillum’s contest against DeSantis. Many GOP elected officials have thrown their weight behind criminal-justice reform to varying degrees in recent years, though it’s unclear if DeSantis counts himself among them. His threadbare campaign issues page doesn’t discuss the issue and his campaign staff hasn’t provided details on the matter to local media outlets. Like Trump, though, he has run as a law-and-order candidate, and seems more likely to emulate the president’s attack on Gillum as a supposed enabler of crime:

Not only did Congressman Ron DeSantis easily win the Republican Primary, but his opponent in November is his biggest dream….a failed Socialist Mayor named Andrew Gillum who has allowed crime & many other problems to flourish in his city. This is not what Florida wants or needs!

In 2015, while serving as Tallahassee’s mayor, Gillum pushed for the city commission to join a ban-the-box initiative when hiring government employees. The nationwide campaign aims to change when employers learn about a prospective candidate’s criminal background. Supporters of the initiative, which range from the ACLU to the Koch brothers’ political advocacy network, argue that it helps people with criminal convictions reenter society and rebuild their lives. Gillum defended the effort on similar grounds against critics who claim that it gives former prisoners amounts to special treatment.

“It is instead about giving people a fair shot on how they are evaluated on their skills and capabilities,” he wrote in an op-ed. “It is about changing the sequence of how the city vets candidates for employment, and the meaningful conversations we can have with people who have paid their debt to society. This is also about giving people the chance to move on with their lives and become responsible and contributing members of their community.” The commission approved the measure on a 3-2 vote.