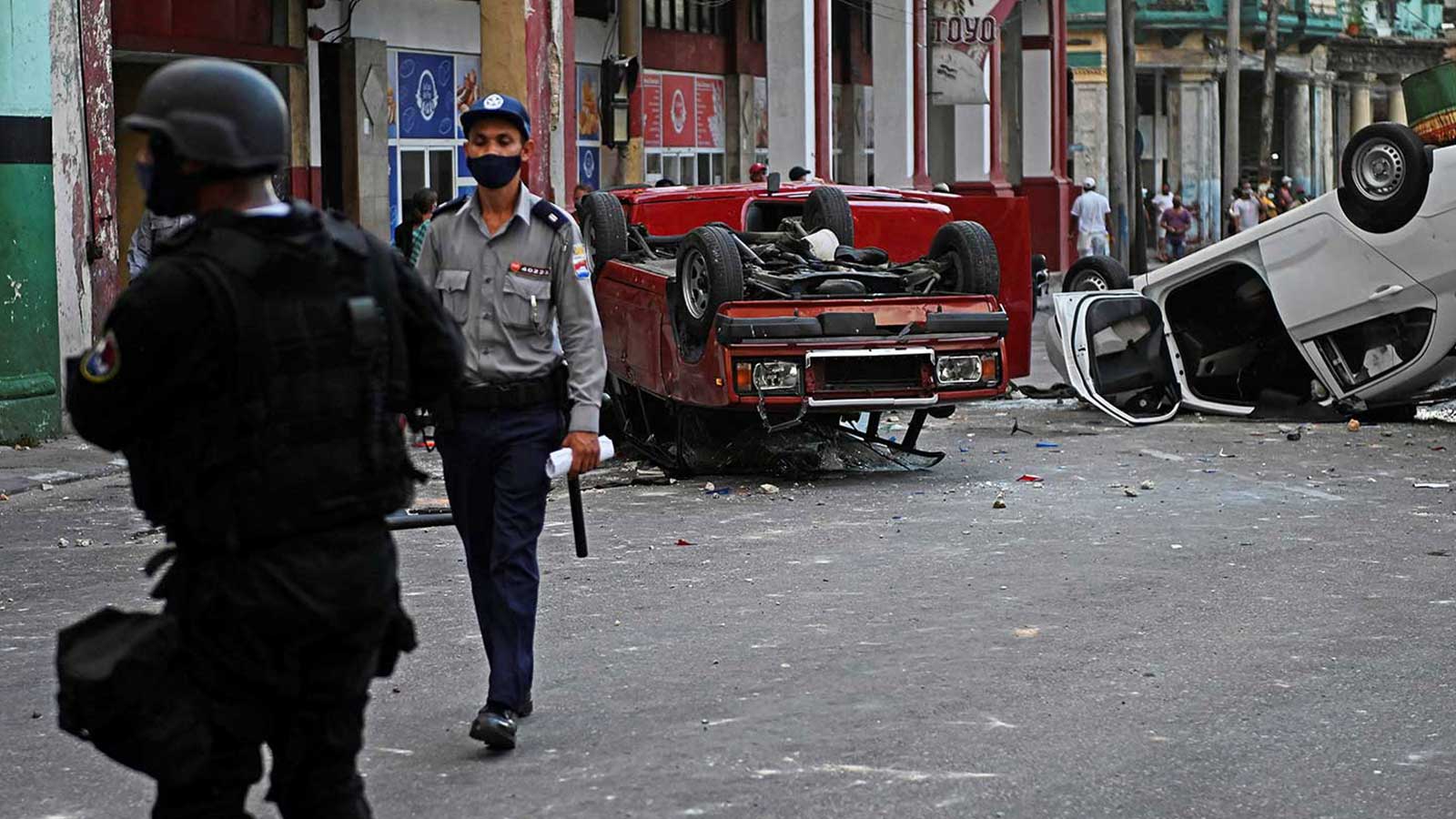 Cuba’s protests are different this time

You Are Here: Home » Blog » Commentaries/Opinions » Cuba’s protests are different this time

A shrinking economy, frightening new rates of Covid infections, and growing discontent with the government are fueling once-in-a-generation protests.

By William M. LeoGrande, The Nation —

Never since the triumph of the Cuban revolution in 1959 have anti-government protesters mounted large, simultaneous demonstrations in cities across the island like they did last weekend. Some of the demonstrations were peaceful; others were little more than riots and an excuse for looting. But all were expressions of people’s economic desperation and frustration at the government’s inability to alleviate their current misery.

The Cuban government is broke. Over the past two years, it has lost every major source of foreign exchange earnings it had. The collapse of oil production in Venezuela cut the export of cheap oil to Cuba by half. US pressure convinced other Latin American governments to cancel medical services contracts with Havana and send Cuban doctors home. The Covid pandemic closed the tourism industry, cutting revenue by $3.2 billion. Just before leaving office, Donald Trump made it nearly impossible for Cuban Americans to send remittances, a loss of another $3.5 billion annually and a direct blow to more than half of Cuban families.

Cuba imports 70 percent of its food, 69 percent of its oil, and most of its medical supplies. The foreign exchange shortage means that Cuba has had to cut imports drastically—nearly 40 percent last year alone and more this year. Store shelves are bare. Pharmacies are empty. Finding food can take hours of searching and standing in lines. Even the stores that only take payment in foreign currencies have little on offer. Recent electrical blackouts trigger people’s worst memories of the “Special Period”—the economic depression Cuba suffered in the 1990s after the collapse of the Soviet Union.

Social tensions have been rising as the economy has deteriorated, visible in small incidents of protest, confrontations between police and civilians, and scuffles on lines at stores—so while the scope of these demonstrations is surprising, the fact that tensions have boiled over is not.

In just the past few months, things have gotten noticeably worse. The government’s unification of the dual currency and exchange rate system in January—a necessary step toward economic reform, Cuban economists agree—unleashed inflation, eroding real incomes despite the government’s attempt to boost salaries to compensate. Covid, which appeared to be under control before the advent of the Delta variant, has now broken out again, with a record numbers of cases, and is threatening to overwhelm the resource-poor health care system.

Cuba’s economic situation is not yet as bad as it was in the 1990s; last year GDP fell 11 percent, and it is still falling, but it fell 35 percent in the 1990s. The political situation, however, is much different today than it was then. The generation that lived through the 1959 revolution and the early halcyon days of revolutionary exuberance were a pillar of regime support back then. Now in their 70s and 80s, they are a small and shrinking constituency.

The dominant age cohorts today are people who came of age after the Soviet collapse. Their experience of “the Revolution” is one of interminable shortages and unfulfilled promises for reform. Fidel and Raúl Castro, whose prestige as regime founders bolstered popular support among older Cubans, are gone, replaced by a new generation of leaders who have to prove their right to rule by performance. They have to deliver the goods, literally, and so far, they have not been able to do it.

Inequality is an added source of frustration and resentment. The government’s market-oriented economic reforms have aggravated inequality, especially along racial lines, and it has become more visible in recent years. Cubans of African descent are less likely to have family abroad to send remittances, less likely to have jobs that provide part of their wages in foreign currency, and less likely to live in nice neighborhoods attractive to tourists looking for private restaurants or room rentals. It is therefore no surprise that the recent protests began in some of Cuba’s poorest neighborhoods.

Social media played a key role in the nationwide scope of the demonstrations. In 1994, when a riot broke out on Havana’s main boulevard, the Malecón, the news spread by word of mouth. Last weekend, social media spread word of the first demonstrations to Cubans across the country, sparking similar protests in a dozen other cities. The government tried, without much success, to limit the spread by cutting off the Internet for most of the day.

For years, Cuba lagged its neighbors in Internet access, but the rapid expansion of Wi-Fi and 3G technology has now given most Cubans—especially young people—connectivity through their smart phones. Social media enables Cubans to connect online with others who share their interests. These virtual social networks have proven to be an effective way to mobilize people for real-world action. Until now, these were small-scale demonstrations focused on specific issues like LGBTQ rights, artistic freedom, and animal rights, but they presaged the role social media played in catalyzing the broader anti-government demonstrations that broke out last week.

The Biden administration’s response to Cuba’s social unrest has been predictable, expressing solidarity with the demonstrators and urging the Cuban government to meet peaceful protests with restraint. No US official has expressed any recognition that the United States is exacerbating the current crisis by continuing Trump’s policies of blocking remittances and suspending the issuance of immigrant visas. Nonetheless, Senator Marco Rubio (R-Fla.) denounced Biden’s response, proving that no matter what Biden says or does about Cuba, Republicans will accuse him of being soft on socialism.

During the presidential campaign, Biden promised to reverse Trump’s sanctions that hurt Cuban families, restore travel to the island, and reengage diplomatically with the Cuban government. Thus far, he has done none of those things. His administration appears paralyzed by a fear of political repercussions in Florida, where Democrats took a beating in 2020, and by the need to keep Senate Foreign Relations Committee Chair Robert Menendez (D-N.J.) happy.

But prioritizing domestic US politics over Cuba’s humanitarian crisis carries risks of its own. A rising cycle of anti-government protests could well trigger greater violence, as has happened elsewhere Latin America. If alienated Cubans decide they have no “voice,” their alternative may be “exit.” The last time Cuba’s economic situation was this bad, in the summer of 1994, 35,000 Cubans chose exit, setting out for the United States on unseaworthy boats and rafts.

Source: The Nation
Featured Image: Overturned police cars in the street in the wake of a demonstration against Cuban President Miguel Diaz-Canel in Havana, on July 11, 2021. (Yamil Lage, AFP via Getty Images)