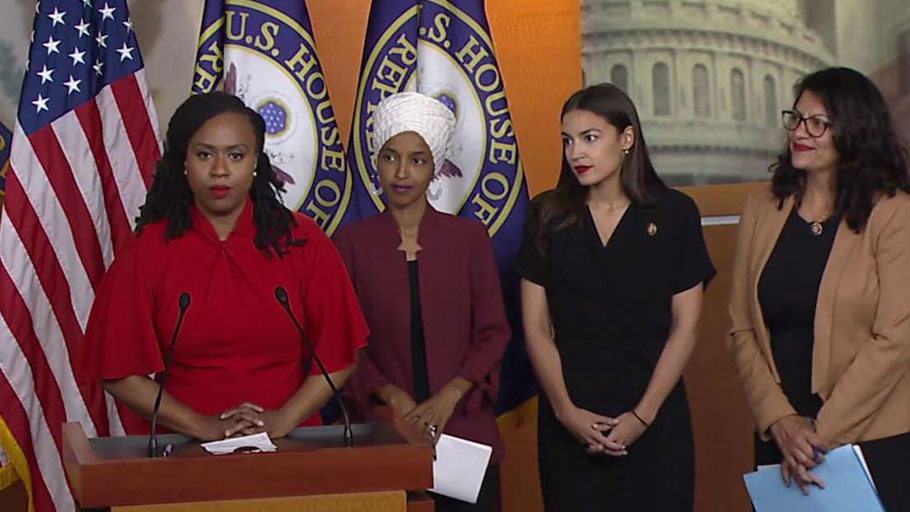 Do We Want the America of Frederick Douglass or Donald Trump?

You Are Here: Home » Blog » Commentaries/Opinions » Do We Want the America of Frederick Douglass or Donald Trump?

One version of America is that of President Trump, whose recent tweets led the U. S. House of Representatives to condemn his “comments that have legitimized and increased fear and hatred of new Americans.” His slogan “Make America Great Again,” his attempts to limit voting, and his pandering to Christian evangelicals are not-so-subtle signals that he perceives himself as defending the fortress of white, primarily male and Christian, dominance against the threat of increasing darker-skinned peoples.

Before his recent tweets against “The Squad”—congresswomen Alexandria Ocasio-Cortez (N.Y.), Ilhan Omar (Minn.), Ayanna Pressley (Mass.), and Rashida Tlaib (Omar and Tlaib also being Muslim)—there were also his claims that President Obama was born in Africa, his reference to Haiti and countries in Africa as “shithole countries,” and his stated preference for immigrants from countries like Norway.

His recent charge that the four congresswomen “originally came from countries whose governments are a complete and total catastrophe, the worst, most corrupt and inept anywhere in the world (if they even have a functioning government at all)” is not only factually wrong—three of them were born in the USA–it also is reminiscent of his “shithole countries” remark.

He added that rather than criticizing “the United States, the greatest and most powerful Nation on earth,” the four women should “go back and help fix the totally broken and crime infested places from which they came.” By doing so, Trump joined a long line of false patriots who equated criticizing America with hating and being disloyal to it.

A competing and completely different version of America is that of the abolitionist Frederick Douglass, whom President Obama identified as one of America’s “great reformers.” In a Boston speech a century and a half ago, Douglass insisted that “our greatness and grandeur will be found in the faithful application of the principle of perfect civil equality to the people of all races and of all creeds, and to men of no creeds.” Douglas advocated a “composite nation.” Historian Jill Lepore calls the concept “a strikingly original and generative idea, about a citizenry made better, and stronger, not in spite of its many elements, but because of them.”

Douglass recalled the U. S. mistreatment of both Native Americans and African Americans, but he also praised the contributions of the latter, as well as various immigrant nationalities like the Irish and the German. In his day, there were great fears regarding Chinese immigrants, but he also thought that they could enrich our nation. “Do you ask, if I favor such immigration, I answer I would. Would you have them naturalized, and have them invested with all the rights of American citizenship? I would. Would you allow them to vote? I would. Would you allow them to hold office? I would.”

Although Douglas’s Christian beliefs were “vital to understanding who he was, how he thought, and what he did,” he also believed that “we should welcome all men of every shade of religious opinion, as among the best means of checking the arrogance and intolerance which are the almost inevitable concomitants of general conformity. Religious liberty always flourishes best amid the clash and competition of rival religious creeds.”

In Douglass’s day, as in 2019, there were those who thought like Sen. Garrett Davis of Kentucky (“I want no negro government; I want no Mongolian [Chinese] government; I want the government of the white man which our fathers incorporated”) and Douglass recognized such fears and objections. “Is there not such a law or principle as that of self-preservation? . . . Should not a superior race protect itself from contact with inferior ones? Are not the white people the owners of this continent? Have they not the right to say, what kind of people shall be allowed to come here and settle? Is there not such a thing as being more generous than wise? In the effort to promote civilization may we not corrupt and destroy what we have?”

But Douglass believed that the talents various immigrants would bring to the USA, the example of nationalities and creeds living harmoniously together that we would set for the rest of the world, and the honoring of “essential human rights” overcame all of these objections.

Following Douglass’s speech, from the 1870s until World War I, millions of immigrants entered the United States. As darker skinned peoples from southern and eastern Europe began arriving in greater numbers, nativist sentiments against them increased. In the 1920s, such attitudes were strong in the Ku Klux Klan, which flourished in that decade.

In 1924, Congress passed the Immigration Act, containing an Asian Exclusion Act, almost banning Asian immigrants, and a National Origins Act, limiting European immigrants but favoring those from northern Europe. As Jill Lepore has written, the purpose of the new law “was to end immigration from Asia and to curb the admission of southern and eastern Europeans, deemed less worthy than immigrants from other parts of Europe.” Reflecting such sentiments was Indiana Republican Fred S. Purnell, who said, “There is little or no similarity between the clear-thinking, self-governing stocks that sired the American people and this stream of irresponsible and broken wreckage that is pouring into the lifeblood of America the social and political diseases of the Old World.” As Robert Dallek tells us, in the early 1930s, there was still strong prejudice against southern and eastern European immigrants: “The belief that these groups could never be turned into citizens who fully accepted Anglo-Saxon economic and political traditions” was widespread.

From the beginning of FDR’s presidency to that of Trump, immigration law and attitudes toward immigrants have varied, but the contrast between nativist views fearful of immigrants and Douglass’s favoring of a “composite nation” represent two ends of a wide spectrum of views on American immigration—and diversification. One end sees it as threat, the other as a blessing.

Unlike Trump and many of his followers, the House of Representatives’ statement condemning the president’s remarks takes the positive view akin to that of Douglass. It quotes President Kennedy, “whose family came to the United States from Ireland.” His 1958 book, A Nation of Immigrants, states that “the contribution of immigrants can be seen in every aspect of our national life. We see it in religion, in politics, in business, in the arts, in education, even in athletics and entertainment. There is no part of our nation that has not been touched by our immigrant background. Everywhere immigrants have enriched and strengthened the fabric of American life.’’ The congressional statement also quotes President Reagan who thought that immigrants were ‘‘one of the most important sources of America’s greatness.”

President Trump’s 1960’s “America-Love-It-or-Leave-It” attitude is also contrary to that of Douglass and many of our finest Americans. From Douglass’s 1852 speech “What to the Slave Is the Fourth of July?” to his words of 1892 that America still had “cause for repentance as well as complaisance, and for shame as well as for glory,” we see the abolitionist both praising and criticizing his country. His spirit was continued by such Americans as Martin Luther King, Jr. and James Baldwin, who in the 1950s wrote, “I love America more than any other country in this world, and exactly for this reason, I insist on the right to criticize her perpetually.” Just recently Sayu Bhojwani, New York’s first commissioner of immigrant affairs and born in India herself, quoted Baldwin’s words in her opposition to Trump’s views, and added that sometimes “to create a more inclusive and transparent democracy, our paths demand disobedience and disruption.”

Taking the criticism of Trump and some of his followers one step further, they have stated or suggested that the four congresswomen he has criticized are socialists or communists. Referring to them, Trump himself tweeted, “We will never be a Socialist or Communist Country. IF YOU ARE NOT HAPPY HERE, YOU CAN LEAVE! It is your choice, and your choice alone. This is about love for America. Certain people HATE our Country.” Trump apologist Sen. Lindsey Graham, R-S.C., called the four congresswomen “a bunch of communists.”

“Un-American,” “communists,” such over-the-top, dangerous and polarizing rhetoric, takes us back to the days of the House Un-American Activities Committee and Senator Joseph McCarthy’s wild charges and investigations of the early 1950s. Trump’s onetime closeness to and fondness for McCarthy’s chief counsel, Roy Cohn, is not coincidental.

The present essay is not suggesting that the present immigration question is not complex and needful of thoughtful consideration (see, e.g., here and here), but the Trumpian fearmongering now going on, is not the way to approach it. In 2019 and 2020, we Americans have a choice. Which kind of America do we want? A “composite nation,” as Douglass advocated, one that takes pride in its ethnic and religious diversity and sets an example for other countries who are fearful of immigrants? Or an America afraid of immigrants, especially if not lily-white, Christian ones, as Trump and many of his followers’ desire? Because of this choice and so many others, the 2020 U.S. elections are crucial, and all real patriots should hope (and do all they can) so that we make the right choices.

Walter G. Moss is a professor emeritus of history at Eastern Michigan University a Contributing Editor of HNN. For a list of his recent books and online publications click here. His most recent book is In the Face of Fear: Laughing All the Way to Wisdom (2019), which treats humor from a historical perspective.