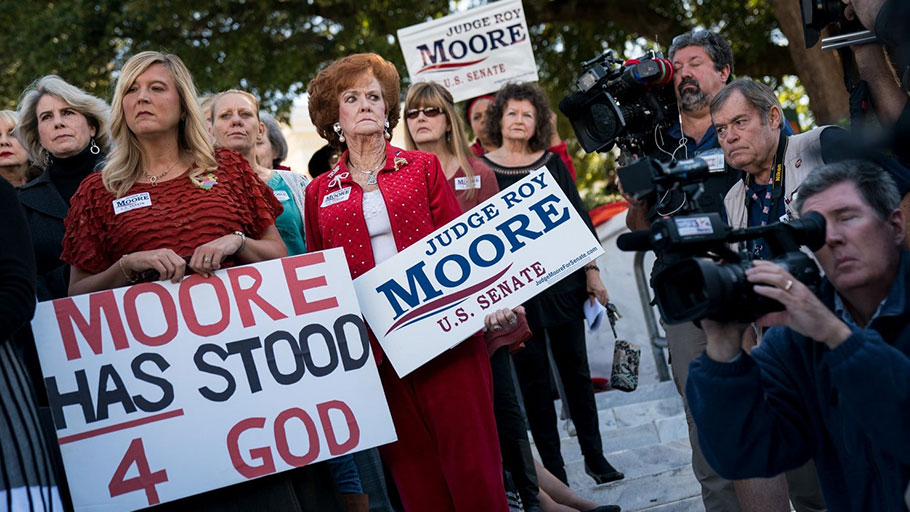 There are two great dangers in the Alabama Senate race. The first is obvious. An alleged pedophile, pro-slavery sentiment voicing, anti-Constitutional protections, voting rights, and avowed anti-gay rights baiter, will win the race. Polls with an occasional swing here and there have been consistent in predicting that former Judge Roy Moore will win the Alabama Senate race.

The second great danger is that if he wins, Black voters will get the blame for it. There have been strong hints of that finger-point in the final run-up days to the election. A spate of articles reported how Moore’s Democratic opponent Doug Jones has made frantic, impassioned appeals to Black voters to storm the polls and vote for him. He’s burnished his limited civil rights credentials to prove that he’s a civil rights fighter, has made the obligatory stops at a few Black churches, and corralled a few Black political notables to make brief stops in the state pitching his candidacy among Black voters.

This sudden spotlight on Black voters has not-so-subtly planted the notion that if Blacks don’t vote in big numbers for him he’ll lose. Now Black voters make up about thirty percent of the states eligible voters. So, at first glance there’s some plausibility to the demand that Blacks pull Jones’s candidacy out of the fire. But that overlooks too many things.

One is what most experts who have looked at the race have repeatedly said. And that’s that Alabama is one of the reddest of red states. No Democrat has won a statewide office in a decade. And white voters make up nearly seventy percent of the state’s voters. The GOP has a dominant edge over the Democrats among the white voters, and that includes white women voters. Polls show that a significant number of them wave off Moore’s alleged serial pedophilia and sexual harassment history and back him. They are rock solid, conservative pro family, pro Bible spouting, fundamentalist, stick by your man no matter what traditionalists. Their backing of him then is no real surprise and few will damn them for doing what they have always done and that’s vote for one of their own, no matter how outrageous, and outlandish his anti-woman misdeeds.

This almost pales in comparison to the other big problem. The state has erected a formidable array of blatantly racist vote suppression ploys aimed at damping down the Black vote to embarrassingly low numbers. They include the standard voter ID laws, closure of scores of DMV offices that just coincidentally happen to be in mostly Black areas, and the jewel in the crown of race tinged voter suppression, the strict prohibition against early voting. There’s still more in the state’s voter suppression arsenal. There’s no provision for no-fault absentee voting, teen pre-registration, and same day registration. Finally, there’s the always popular ban on felon voting ploy. Though, the state isn’t supposed to enforce a felon vote ban, court rulings have held that state officials are under no obligation to tell prospective voters with a felony conviction that they can register and vote.

Yet another problem is the Jones candidacy. He waited until way late in the political game to try and sell his candidacy to Black voters. He is no different than many other Democrats. They make the fatal assumption that a guy such as Moore as with Trump is so politically GOP hideous to Blacks that they will gallop to the polls with to vote for their Democratic opponent. It doesn’t work that way. And legions of would be Black voters, civil rights leaders, and political activists have screamed at the Democratic party to pile loads of money, resources, and troops in Black communities to rev up the vote. They also loudly warn that Democrats must put forth a fighting program for jobs, health care, criminal justice reform, and to strengthen civil rights protections to get Black voters to stampede to the polls to tip the scales in a close race such as maybe the Alabama race t a Democrat. A stop at a Black church and parading around with a handful of high profile out of the district Black politicians hardly fits the bill.

The operative word when Blacks don’t respond with a big voter turnout for a Democratic candidate in a head to head contest with a Republican candidate is “apathy.” This supposedly explains why the GOP candidate won, and won precisely because of that apathy. This inevitably ignites the all-too-familiar blame game of Blacks for somehow letting the party down and opening the door wide for yet another GOP political enemy. The big loser so the thinking goes is Blacks. That part is true. What isn’t true is that the fault lay solely with Black voters. That will be the case in Alabama too if Moore wins.

Earl Ofari Hutchinson is an author and political analyst. His latest book is, The Trump Challenge to Black America (Middle Passage Press). He is a weekly co-host of the Al Sharpton Show on Radio One. He is the host of the weekly Hutchinson Report on KPFK 90.7 FM Los Angeles and the Pacifica Network.