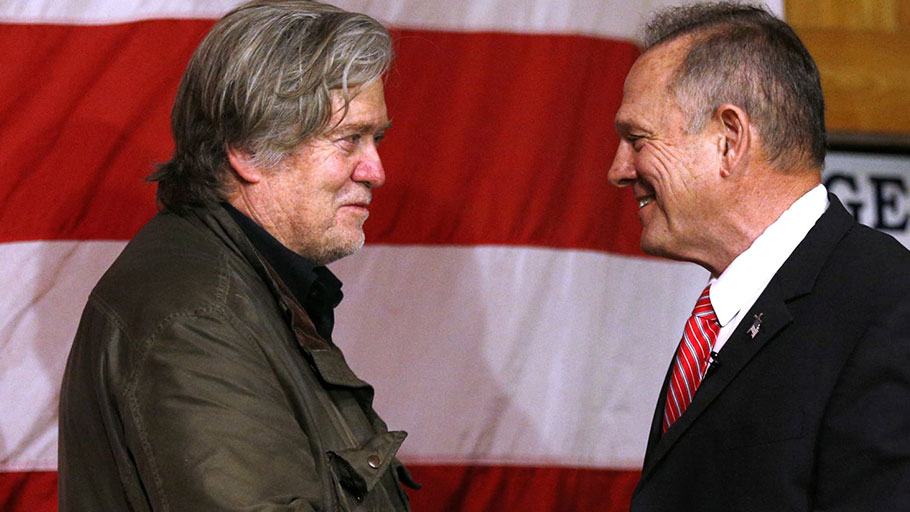 Thanks to the insane way Alabama’s Senate race has unfolded, voter suppression could get Roy Moore elected.

Before three women accused Moore of sexual misconduct when they were teenagers—one said he coerced her into sex when she was 14—the race was very much in Moore’s favor. When the accusations surfaced and mainstream Republicans recoiled in disgust, it looked like Moore was finished. But with President Trump endorsing him, and huge flows of outside money aiding his cause, Moore is now running more or less even with his Democratic opponent, Doug Jones.

More, specifically, Moore’s base has stood by him, saying he has been falsely accused (“like Jesus” as one church sign said); many female moderates have drifted over to Jones; and most Republicans appear ready to hold their nose and vote for Moore the alleged child sexual predator rather than Jones the baby-killer.

The great unknown, which will probably determine the outcome of the race, is voter turnout. If enough moderate Republicans are disgusted by both options and sit the election out, they could hand the seat to Jones. More importantly, this race may come down to turnout among African Americans, who overwhelmingly vote Democrat but aren’t often the decisive constituency in deeply Republican Alabama.

But if the election is to be decided by black voters, that means it will be decided by Alabama’s labyrinth of “anti-fraud” voting provisions which just coincidentally happen to disproportionately hit communities of color.

There are several ways in which Alabama makes it harder to vote, exacerbated by a secretary of state with some frankly bizarre ideas about how to do his job.

First, Alabama has one of the strictest voter identification laws in the country. Deuel Ross, a lawyer for the NAACP Legal Defense Fund, has been fighting the voter ID law in court, but, he told The Daily Beast, his case will not be resolved in time to impact the special election next week.

“There are about 118,000 voters in Alabama who either have no form of photo ID or a form they couldn’t use to vote,” Ross said.

Not surprisingly, given the not-so-coincidental pattern of voter suppression across the country, “Black and Latino voters are twice as likely as whites not to have any ID or acceptable ID,” said Ross.

To put that number in perspective, just over 2 million Alabamans voted in the 2016 presidential election (62 percent for Trump). Even if as many people vote in the special election, disqualified voters of color make up about 4 percent of the electorate—far greater than the current polling margin between Moore and Jones.

And those numbers are probably high. Only 818,000 people voted in Alabama’s 2014 Senate election; those disqualified by the voter ID law make up a whopping 10 percent of that figure.

But when you disqualify 118,000 otherwise eligible voters, that’s more than enough to swing a close election like this one.

Moreover, voter ID laws also decrease turnout among those who actually are eligible. A study cited in Ross’ case found that turnout in majority-black counties in Alabama decreased 8 percent after the voter ID law was passed—far higher than in majority-white counties.

“If you’re confused about what the voter ID requirements are, that also affects turnout,” Ross told The Daily Beast. “You may have acceptable ID but you may think that you don’t.”

“Witnesses have testified about sheriffs standing outside polling places,” Ross said, “telling people that if you have an outstanding warrant, you’re going to be arrested.” That kind of intimidation isn’t directly related to voter ID, of course, but it creates anxiety in the minds of any voter who’s not sure of the law.

And voter ID is only one piece of Alabama’s puzzle of rules that makes it hard to vote. The state has no same-day registration, no automatic voter registration, no pre-registration for people under the age of 18, and no early voting.

Now, if voter fraud were a real crisis, these rules would have some justification. But voter fraud is fake news.

In Ross’ litigation, investigators found only two cases of fraud between 2001 and 2010 that would have been prevented by the ID law. Not two thousand, not two hundred: two.

And that is what has justified disenfranchising 118,000 voters, two-thirds of whom just happen to be black and Latino.

These people fought—some of them were beaten, some of them were killed—because of their desire to ensure that everybody that wanted to had the right to register to vote and participate in the process. I’m not going to cheapen the work that they did. I’m not going to embarrass them by allowing somebody that’s too sorry to get up off of their rear end to go register to vote… because they think they deserve the right because they’ve turned 18.

As noted in a Slate piece on the interview, Lewis strongly supports the automatic voter registration policies that Merrill has opposed.

Merrill’s most telling comments came later in the interview, when he described voting as a privilege rather than a right:

If you’re too sorry or lazy to get up off of your rear and to go register to vote, or to register electronically, and then to go vote, then you don’t deserve that privilege. As long as I’m Secretary of State of Alabama, you’re going to have to show some initiative to become a registered voter in this state.

This view, both of the constitutional right to vote and of Merrill’s own job as secretary of state, is extremely warped. The right to vote is not something that is deserved or not deserved, no matter how much right-wing rhetoric on “personal responsibility” one deploys. It is a right held by everyone, lazy and sorry people alike. And Merrill is tasked with making it as easy to exercise as possible, not with exercising his own moral judgment of who he deems to be worthy.

Merrill’s twisted perspective is just one part of the hall of mirrors that is the Republican Party’s voter suppression crusade: a nonexistent crisis as a pretext for disenfranchising millions of voters nationwide; resounding court defeats with courts finding racial discrimination as the true motive behind such efforts; a national “voter fraud” commission headed by one of the most transparently dishonest architects of voter suppression; and perhaps typically of the post-truth era, a denial that voter suppression is even a thing. In this world, what’s real is fake and what’s fake is real.

But next week’s election is very real, with the balance of the Senate, the future of the Republican Party, and, given Moore’s politics, the very nature of our civil society is at stake. It’s also very close—so close that the lies of voter suppression may well dictate the outcome.