Roy Moore vs. Doug Jones Has Nothing to Do With Little Girls; It’s About White Supremacy

You Are Here: Home » Blog » Editors' Choice » Roy Moore vs. Doug Jones Has Nothing to Do With Little Girls; It’s About White Supremacy 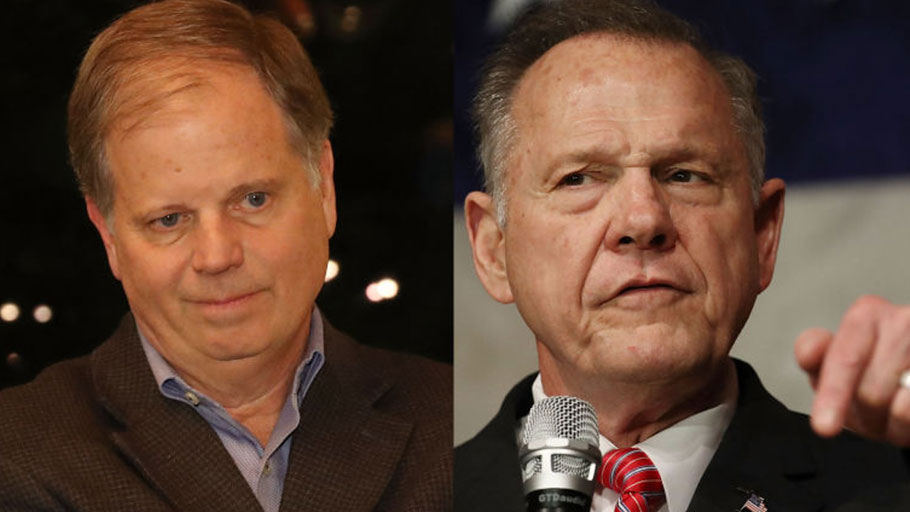 When die-hard Republicans engage in the often fruitless exercise of soliciting black and minority voters to buck the stranglehold of the Democratic voting bloc and join the constantly shrinking tent of the Grand Old Party, they always resort to the same tactics. They declare themselves “the party of Lincoln” and mention how they ended the two-and-a-half centuries-long genocide of chattel slavery. They remind their black and brown constituents of how Republicans led the passage of the Civil Rights Act and the Voting Rights Act. They make a convincing argument that the Democratic Party lives off the legacy of the legislative achievements that were actually enacted by the Republican Party.

And they are absolutely correct.

However, what they fail to mention in their back-patting stroll through history, is how they took their legacy of fighting for equality and civil rights, stuffed it in a box and locked it in the vault of history. They never acknowledge how they tossed aside this noble legacy for power and survival.

The South has become an unbreakable Republican confederation and it is the biggest reason the party is still relevant on a national scale. Loyal GOP acolytes will tell you their slave-state stronghold is because of conservative Christian values and small-government independence. But they are aware that those catchphrases are all euphemisms for “white supremacy.” And nowhere is that truth being laid more bare than in Alabama.

The electoral death match between Senate candidates Roy Moore and Doug Jones is billed by news outlets across the country as a fight between a child molester and a civil rights hero. Every article written about it alternately examines how Moore preyed on junior varsity cheerleaders or Doug Jones convicted the bombers of one of the most heinous acts of racial terrorism in the history of this country.

It is all a ruse.

Tuesday’s election has little to do with the bodies of little girls —whether they are the ones whose praying bodies were dismembered by the bombs of Ku Klux Klansmen or violated by the preying hands of Roy Moore. It is about the Republican Party’s history of duping poor white voters to vote against their own self-interests so GOP powerbrokers can sustain their stranglehold on the Solid South. It is about the legacy of racism, slavery and inequality.

It is about white supremacy. Nothing more. Nothing less.

“… the whole problem is really the blacks. The key is to devise a system that recognized this while not appearing to.”

Republicans are right in one sense (just typing that sentence hurts my groin): After Reconstruction, the South was solidly Democratic. Deep South Dems fought against the end of slavery and for the separation and subjugation of the races as their “way of life.”

Until the presidential election of 1948, the Democratic Party was the party of Jim Crow, segregation and the Ku Klux Klan. In all the presidential elections between 1880 and 1947, Herbert Hoover (who ran against Catholic, New York Democrat Al Smith) was the only Republican to win more than three of the Southern slaveholding states, which included Alabama, Arkansas, Florida, Georgia, Kentucky, Louisiana, Mississippi, North Carolina, Oklahoma, South Carolina, Tennessee, Texas, Virginia and West Virginia (more commonly known as the “Iced Tea States”).

In 1948, disgusted with President Harry Truman’s order to desegregate the Army and the Democratic Party’s support for anti-Jim Crow laws, 35 delegates from the Deep South walked out of the Democratic National Convention and formed the Dixiecrat Party.

It was the end of the solidly Democratic South.

In 1960, Harry F. Byrd managed to win two states on a platform of “massive resistance” to integration. (By the way, if you’ve never read about Harry F. Byrd’s history of racism, you should. He makes David Duke look like … well David Duke will always look like a worn tube sock only used to clean up post-masturbatory messes, but you get what I’m saying.)

Byrd, Thurmond and Wallace are first, second and third on the list of the most-successful third-party presidential candidates in the last 100 years. In fact, since 1948, no third-party candidate has ever won more than a single electoral vote except for these three men whose runs for president were based on the supremacy of the white race.

Segregationist Byrd won the majority of Alabama’s Electoral College votes in 196o even though no one voted for him. When Dixiecrats walked out of the 1948 Democratic National Convention, they met in Birmingham, Ala., to crown Thurmond the leader of their efforts to maintain the South’s white supremacy. George Wallace infamously stood on the steps of the University of Alabama to preserve the perceived racial pecking order.

It is always Alabama.

In 1964, Republican candidate Barry Goldwater won five Southern states, including Alabama, by opposing the Civil Rights Act. He failed and the bill passed, much to the dismay of Southern whites.

The next election, former Vice President Richard Nixon teamed with strategist Harry Dent and Thurmond, who had now switched to the Republican Party, to create a way to appeal to Southerners in favor of white supremacy without saying it out loud. White House chief of staff H.R. Haldeman noted in his diary that Nixon “emphasized that you have to face the fact that the whole problem is really the blacks. The key is to devise a system that recognized this while not appearing to.”

Nixon won the 1968 election by carrying seven Southern states. By the time the 1972 election rolled around, he had used his dog-whistle politics to win every single state in the South. It worked like a charm.

After that 1976 election, Republican strategist Lee Atwater tinkered with Nixon’s template to guide Ronald Reagan to two consecutive terms and George H. W. Bush to another.

In a 1981 interview, Atwater described how Republicans had dog whistled their way into the White House:

You start out in 1954 by saying, ‘Nigger, nigger, nigger.’ By 1968, you can’t say ‘nigger’—that hurts you, backfires. So you say stuff like, uh, forced busing, states’ rights, and all that stuff, and you’re getting so abstract. Now, you’re talking about cutting taxes, and all these things you’re talking about are totally economic things and a byproduct of them is, blacks get hurt worse than whites. … ‘We want to cut this,’ is much more abstract than even the busing thing, uh, and a hell of a lot more abstract than ‘Nigger, nigger.’

He called it “the Southern strategy.”

It is still going strong. Of the 52 GOP senators of the 115th Congress, 28 are from Southern states. The GOP’s legislative agenda depends on its partisan majority and the only way it can keep its narrow margin is by using the Southern strategy…

Which brings us to Roy Moore.

The Republican Party would have you believe that the 81 percent of white voters who voted for the GOP were concerned with family values, small government and fiscally conservative principles. They will convince you that Moore’s supporters value his stances on abortion, gay marriage and Christian values.

Those people are liars.

They claim to want to protect the values of the unborn by rewarding a man who has preyed on actual live children. They say they want law and order while rejecting a candidate who punished the perpetrators of one of the most unlawful acts imaginable. They say they value guns and marriage but eschew the protection of their most vulnerable in favor of a man who kicked his wife to the curb after he met his current wife when she was still in high school.

Those people are liars.

Yet the rallying cry and dog whistle that has congealed Roy Moore’s defenders into a cluster of faux-conservatives willing to stuff their fingers in their ears and close their eyes when they hear and see evidence of his long history of pedophilia is their supreme allegiance to “Alabama values.”

But what are Alabama values?

Alabama values elected an avowed white supremacist for governor four times, but only after he embraced the KKK, admitted he was “out-niggered” by his opponent and vowed that he would “never be out-niggered again.”

Alabama values selected as their winner every single presidential candidate who ever ran on a platform of segregation or white supremacy. Alabama’s values sprayed water hoses at little children who marched for equality. Alabama’s values were OK with law enforcement officers organizing Klansmen to attack the Freedom Riders and literally broke John Lewis’ skull on Selma, Ala.’s Edmund Pettus Bridge.

And Alabama’s values aren’t distant fading memories of the past. Alabama’s values are encoded in Shelby v. Holder, the Supreme Court case that dismantled the Voting Rights Act of 1965. It was Alabama’s values that cheered when Donald Trump called Colin Kaepernick and the NFL players who protested injustice and inequality “sons of bitches.” Alabama’s empty Senate seat was formerly occupied by a man so filled with Alabama values, he once said he thought the KKK was OK, told a black colleague he “ought to be careful as to what you say to white folks,” and called a white civil rights attorney a “disgrace to his race.

We combed through the transcript of Sen. Jeff Sessions’s 1986 Senate hearing to provide a…

Alabama values white supremacy. Above the safety of its children. Above the equality of its citizens. Above the reputation of its state. Above everything.

It has never cared about state’s rights or conservative principles. It cares about keeping black people in line and white people winning.

Alabama will do anything it can to preserve the white man’s place atop its social order, even it means making a cowboy cosplaying child molester one of the most powerful men on the planet.

This is not an opinion. It has been proved by every political, social and economic move ever made by this state over its long existence. It is as close to truth and fact as anything ever will be. It is indisputable. There is only one possible thing that can ever make this untrue:

Michael Harriot is a staff writer at The Root, host of “The Black One” podcast and editor-in-chief of the digital magazine NegusWhoRead. He always has the big joker and the double five.