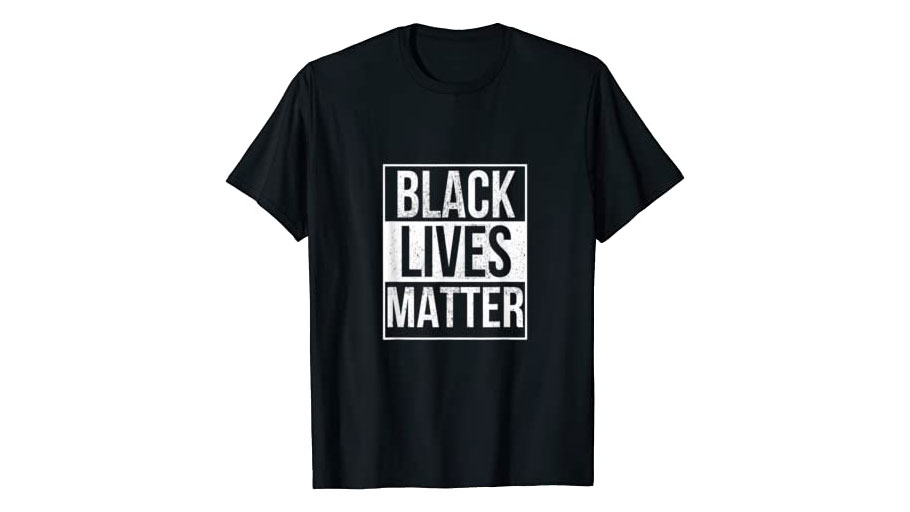 I always smile when I see Black Lives Matter T-Shirts until I saw one gracing the grubby back of a white man who had on both a BLM T-Shirt and a MAGA (Make America Great Again) hat.  I started to either take a photo or start a conversation because I knew somebody would accuse me of making the combination up.  Instead, I wondered where the man got the shirt/hat combo.  Was he homeless and got the combo at a shelter?  Was he visually impaired and didn’t understand the contradiction?  Without starting a conversation, I was left to my imagination.  It had me thinking about the production and distribution of BLM wearables and the profit stream they may be creating.

You can find custom-designed screened T-shirts online for as little as $5 apiece, and anybody can make T-shirts and a profit.  If Black lives, Black dollars, and Black profits matter, it makes sense to look behind the t-shirt to consider the sellers and their motives.  You might be funding your oppression by purchasing the right message from the wrong seller.

I think the best place to buy BLM clothing and accessories (I’ve seen hats, bags, signs, and more) is from the BLM website, www.blacklivesmatter.org.  Things will cost more there than they might cost from a street vendor or another source, but the BLM site profits will fund the movement.  From the BLM site, you can also sign up to get email updates.  The second best source is a BLACK street vendor, who will at least be able to pocket the difference between what she purchased the shirts for and what she sold them for.  Increasingly, COVID-imposed economic hardship has motivated people to take their entrepreneurial ability to the streets.  The next best source might be BLM-friendly activist organizations that are selling BLM stuff.  It doesn’t hurt them, though, to ask where they got the shirts and where the profits go.

The worst place to get BLM material is from a capitalist retail establishment like Walmart, which sells the shirts and (until June) All Lives Matter shirts, Irish Lives Matter shirts, and Homeless Lives Matter shirt.  While taking nothing from the homeless or the Irish, in some ways, these shirts attempt to undermine and minimize the purpose and focus of the Black Lives Matter movement.  We say Black Lives Matter emphatically because our lives didn’t matter when our country was founded.  They didn’t matter when we were lynched, and no one was ever prosecuted.  Our lives have little value when we are treated inhumanely, with our little girls being dragged by their braids by rabid police officers, shot in the back, subjected to chokeholds to the point where we can’t breathe, endured a knee to the neck to the point of death and more.  Taking the Black Lives Matter slogan and spoofing it (Drunk Wives Matter) attempts to minimize the racism that riddles our country.

In June, Walmart said it would spend $100 million over five years creating a “center for racial equity.”  Though its CEO, Doug McMillon, explicitly said “Black Lives Matter” at a June virtual company-wide meeting, the commitment was vague.  Walmart, one of the largest employers of African Americans, put their money where their rhetoric is and pay people fairly, provide good benefits (including health care and paid sick leave), and establish a center for racial equity.  With 2019 profits exceeding $123 billion in profit, they can certainly afford to spend a fraction of one percent of those profits on racial equity.

There are online T-shirt companies that sell Black Lives Matter and Blue Lives Matter T-shirts, missing BLM’s whole point. They include Wild Bobby and Old Glory Merchandise, neither of which is Black-owned.  They are just capitalists hedging their bets, just like the white-owned stores that offer discriminatory service but put BLM signs in their window.  Instead, why not look for a Black-owned t-shirt company.  All you have to do is google “Black-owned T-shirt company,” and dozens pop up.

Don’t let the BLM movement be a profit center for predatory capitalists.  Ask questions before you buy.  Buy Black.