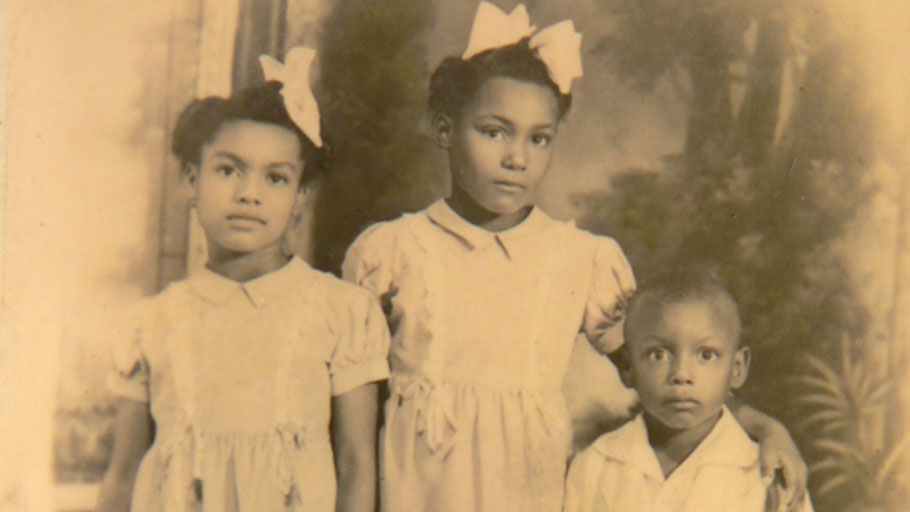 Patricia Stephens Due (L) with her siblings, Easter Sunday, c.1940s

By The History Makers —

Easter, also referred to as Resurrection Sunday, is the oldest and arguably the most important of all Christian holidays. Like most holidays, its origins extend beyond Christianity. Easter was “derived from a combination of Jewish lore and pre-Christian and pagan practices. It is named after Eostre, the goddess of fertility and birth, worshiped by first-century pagans at the vernal equinox… Christian missionaries saw that this celebration took place around the time of the resurrection of Christ, so they adopted Easter as a Christian holiday to increase conversion.”[1] 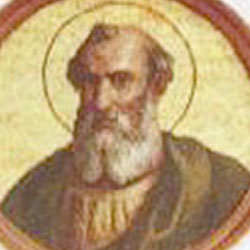 It was during the reign of the fifteenth pope, Saint Victor I, that the day of Easter celebrations was universalized to be celebrated on Sunday. Victor was a native of northern Africa, and served as pope from 189 to 199 A.D. He was the first pope native to Africa, followed by only two other African popes, Saint Miltiades, who served as the 32nd pope from 311 to 314 A.D., and Saint Gelasius I, who was the 49th pope from 492 to 496 A.D. More notably, roughly 100 years after Pope Victor I’s declaration of when Easter was to be celebrated, we can trace a very common tradition back to that period; the new outfit for Easter Sunday: “In the early days of Christianity, newly baptized Christians wore white linen robes at Easter to symbolize rebirth and new life. But it was not until 300 A.D. that wearing new clothes became an official decree, as the Roman emperor Constantine declared that his court must wear the finest new clothing on Easter. Eventually, the tradition came to mark the end of Lent, when after wearing weeks of the same clothes, worshipers discarded the old frocks for new ones.”[2] 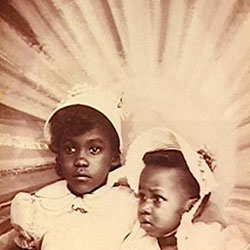 Centuries later, popular superstitions furthered the tradition. A “15th-century proverb from Poor Robin’s Almanack stated that if one’s clothes on Easter were not new, one would have bad luck: ‘At Easter let your clothes be new; Or else for sure you will it rue.’ In the 16th Century during the Tudor reign, it was believed that unless a person wore new garments at Easter, moths would eat the old ones, and evil crows would nest around their homes.”[3] In the United States, modern Easter traditions were not celebrated until after the Civil War; “After the devastation of the war, however, the churches saw Easter as a source of hope for Americans. Easter was called ‘The Sunday of Joy,’ and women traded the dark colors of mourning for the happier colors of spring.”[4] 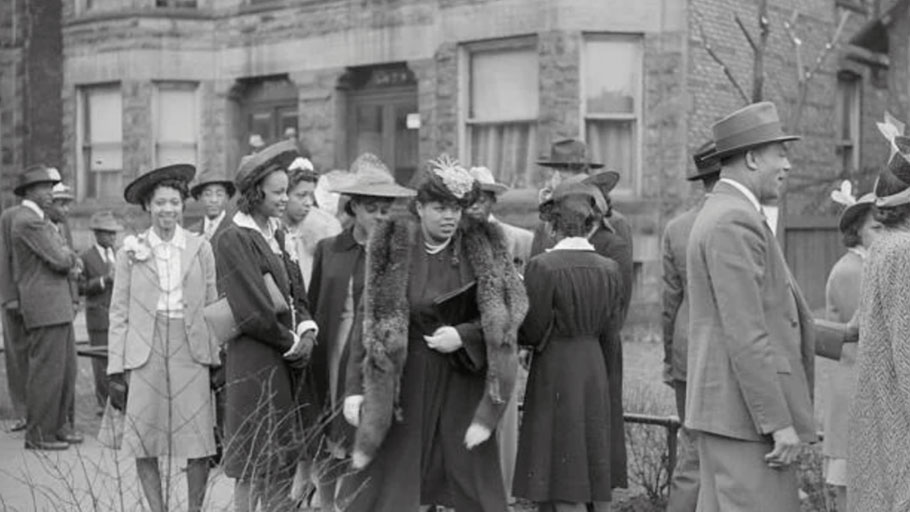 Accountant Frank K. Ross (1943 – ), when talking about Easter Sunday as a young boy, smiled and remembered, “Easter is the day we all got to change our clothes. In other words, we got new Easter outfits. So our old Sunday clothes now became our school clothes. And old school clothes now became, you know, the knock around clothes.”[5] Professor of social policy Jewelle Taylor Gibbs (1933 – ) recalled: … one of the sights I remember most as a child is Easter Sunday, when all the ladies had the beautiful hats. So we always looked forward to Easter Sunday, because here you have the beautiful hats, and people were all dressed up….anyone growing up in that era remembers the Easter Sunday and the Sunday parades after church; people showing off their finery.”[6] 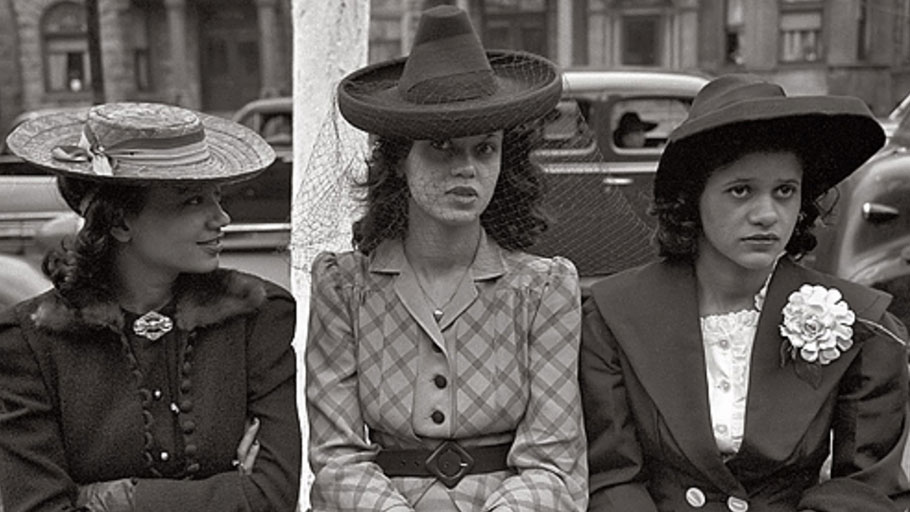 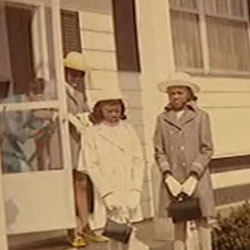 Actress Janet Adderley (1956 – ) also pointed out the importance of the perfect Easter hat: “…Easter Sunday was the day. And all of these women spent hours getting the perfect hat to coordinate with the perfect suit with the same shoes and the leopard skin, you know, purse, and I mean it was, it was hard core… and as a little girl, each Easter we got a new pair of white patent leather shoes, and we got some lovely Easter bonnet that we would have to wear. And then every Easter we’d stand out in our front yard and take a family photo, that was the photo that marked our growth each year was Easter Sunday.”[7] This was echoed by wife of blues legend Willie Dixon, Marie Dixon (1937-2016): “We looked forward to having an Easter outfit. That was one thing that my parents made sure we had… in spite of having very little money. My father worked very hard, and my mother did too.”[8] 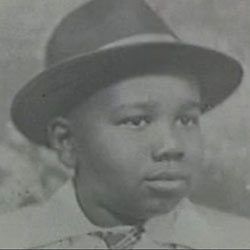 Then there were the other coming of age Easter traditions as told by labor activist and pastor Reverend Addie Wyatt (1924 – 2012): “… one of the great benefits of children in the black church… is that you learned to speak before great audiences. And you have to perform and the people will determine whether or not you’re doing well, and they would let you know that.”[9] Civil rights lawyer Thomas N. Todd (1938 – ) remembered this tradition as well: “I was asked to give an Easter speech, when I was four years old. And, and my speech was–and I still remember that speech–my first public speech was, ‘I didn’t come to stay. I just came to say, ‘Happy Easter Day.’’ And they just applauded, and what have you. But that was my first public speech.”[10] 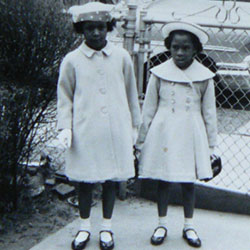 Gale Horton Gay and her sister in coats their mother made Easter Sunday, c. 1959

Some children as noted by Journalist Roy S. Johnson (1956 – ) were not as compliant. His Easter speech simply did not go as planned: “I had practiced fifty thousand times with her [Aunt Bobbie] and my mom prior to the program on Sunday and then I got on the stage on Sunday and stood there in front of the microphone and said, ‘I don’t know my speech.’ And my mother just was incredulous, she was–and Aunt Bobbie, who was the moderator, said, ‘Yes, you do. We practiced.’ And I said, ‘Unh-uh, I don’t know my speech’.”[11] 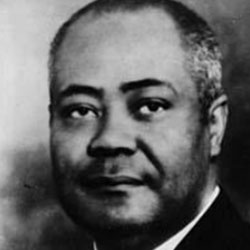 The minister’s sermons were also often memorable as noted by civil rights lawyer Howard Moore, Jr. (1932 – ) when recalling on of the sermons of Reverend Williams Holmes Borders, Sr. of Atlanta’s Wheat Street Baptist Church: “Easter sermons on Easter Sunday morning– his sermon was something else. I mean, he would have Jesus in the crypt, and he would roll back the rock. He would get down and he’d be blowing into the mic, and then as the rock rolls back and Jesus ascends–is resurrected, then the snare drums come up, and then the trumpet come in, and the guitar and then the choir come in. I mean, you get–that’s a good feeling, you know. It’s a good presentation, a good dramatization, you know. And it’s a lot of spirit in the church.”[12] 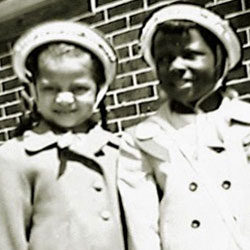 Of course, we cannot forget the food… or the candy and sweets. Publisher of the Omaha Star, Marguerita Le Etta Washington (1948 – ), laughed and recalled the Easter basket her father brought her:“… [it] had a lot of chocolate in it, candy and other stuff like that and I tried to eat the whole thing and I was so sick . I remember that like it was yesterday. ‘Cause he had planned to take me various places and I was so sick I was sprawled out, sprawled across the bed… I couldn’t move.”[13]

With the fond memories many carry of Easters past, may this season of trial and tribulation be a season of growth and rebirth. And even if this Easter Sunday may need to celebrated virtually, let’s rejoice in the knowledge of the African roots of this Easter Day tradition.

City finances are hard-hit by the Coronavirus

City finances are hard-hit by the Coronavirus
We Need Your Support — Donate, Share, Sign-Up Ways to Support