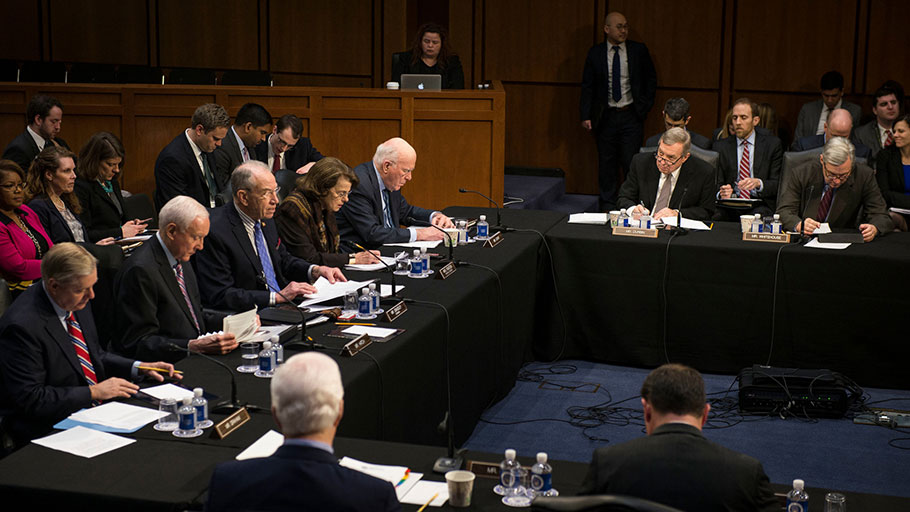 The universal consensus on Trump and Senate Majority Leader Mitch McConnell’s speed rush to fill Ruth Bader Ginsburg’s seat is that Senate Democrats can do nothing to stop it. This is dead wrong. The operative word here to muck up Trump and McConnell’s confirmation scheme is time, time, and more time. Time, they don’t have much of.

Yes, the committee can meet anyway and bend the rules to justify the hearings and then threaten to move the nomination to a full Senate vote. But just the act of staying away at least for the start of the hearings and maybe longer will be more than symbolism. It will allow the Senate Democrats to dramatically make the public case against the nominee, to continue to blast McConnell’s hypocrisy in trying to ram through the nomination, and to hammer away at the political danger of this precedent.

But before it goes to committee, there’s much more that the Democrats can do. They can:

These delay tactics involve making creative use of the Senate’s arcane and voluminous rules, and not just blustery speeches. The GOP has made masterful use of those rules when it suited it to block or stall Obama’s nomination of Merrick Garland to the SCOTUS and any other of his administration’s appointment during the years when it was the minority party in the Senate.

McConnell will relentlessly and ruthlessly cajole, browbeat, and manipulate the Senate rules to parry any one or more of these tactics that the Democrats could use. However, all this will take time, time, and more time. Time in which the Democrats can continue to mobilize and energize millions of Americans about the shame, hypocrisy and danger of Trump and McConnell’s little stunt to pack the court with hard right idealogues.

Equally important, it will also prove that Democrats can do more than talk, shout, rail, and complain about the unfairness of the court packing scheme. That they are willing and able to take concrete action to try and torpedo the scheme.

Two Senate republicans have done the right thing and said no vote on a nominee should be taken until after the election. Now, in a perfect and fair world, all the GOP Senators would say this and none of this would be necessary. Trump and McConnell would observe the rule of law, precedent, convention, and certainly the wishes of Ginsburg. That is that no nomination and confirmation be made and voted on until after the presidential election and Americans know for sure who will sit in the White House in January 2021.

The X factor in all of this is not the tactics the Democrats have at their disposal but the Democrats themselves. The GOP gave Democrats a template on how to use every Senate ploy to hector, harass, and stall Trump’s SCOTUS nominee. They did not simply make defiant sounding speeches. The fight over Ginsburg’s seat and legacy could be the Senate Democrat’s shining moment to show that contrary to opinion, there’s a lot they can do too muck up Trump’s SCOTUS bum rush.

Earl Ofari Hutchinson is an author and political analyst. He is the author of What’s Right and Wrong with the Electoral College (Middle Passage Press). He is a weekly co-host of the Al Sharpton Show on Radio One. He is the host of the weekly Hutchinson Report on KPFK 90.7 FM Los Angeles and the Pacifica Network

Photo: The Senate Judiciary Committee met to consider the nomination of Judge Neil M. Gorsuch on Monday in Washington.Credit…Gabriella Demczuk for The New York Times