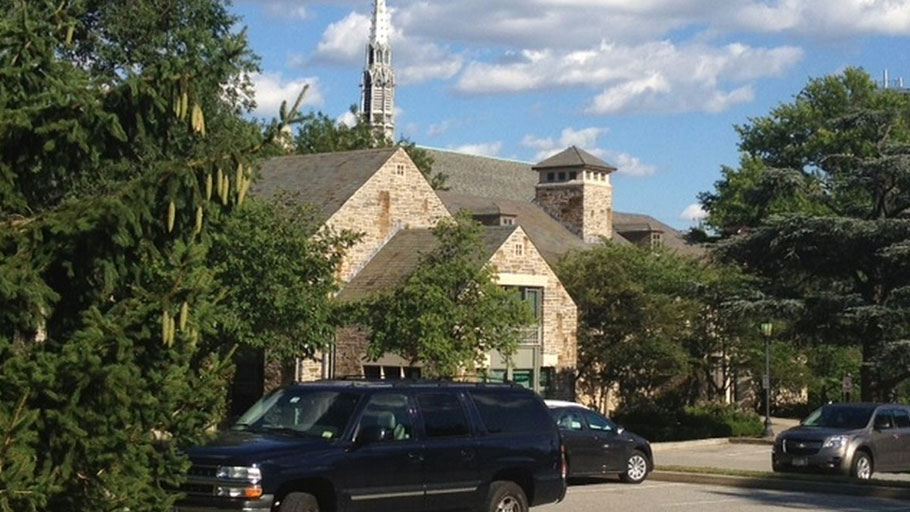 The Maryland diocese of the Episcopal Church has become the latest religious institution to commit to making reparations for slavery and systemic racism, voting over the weekend to create a $1 million seed fund for programs that would benefit the African American community in Baltimore and beyond.

More than 82% of delegates to the diocese’s annual general convention voted Saturday to establish the fund. Officials said it’s a key step in a long-term campaign to confront — and repent for — the role the church played in fostering and benefiting from systemic racism in the state.

Existing funds in the diocese’s endowment will provide the capital for the initiative, and individual congregations are being asked to consider donating more.

“We have done the work over the last 15-plus years to actually document how we as a church benefited from slavery and, after slavery, how we continued to benefit from the financial marginalization and oppression of Black Americans, and it just didn’t sit well with us,” Sutton said.

“Why should we continue to benefit as an institution when so many in the Black community have never had the opportunity to have a good education, good jobs or good medical care? We’ve benefited from racist institutions, and now we are going to invest financially.” 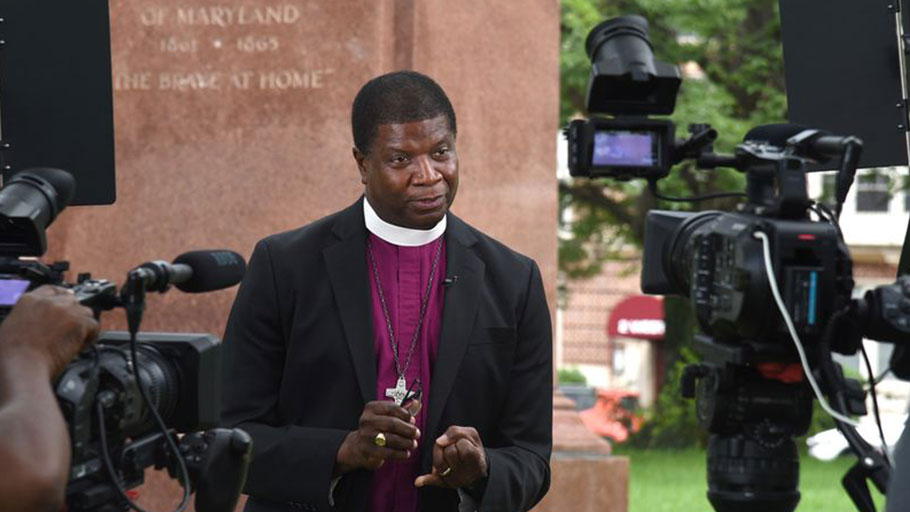 The Rt. Rev. Eugene Taylor Sutton, the Episcopal Bishop of the Diocese of Maryland is filmed by Charm TV in front of the base of a Confederate monument that was removed at University Parkway and North Charles Street. Bishop Eugene Taylor Sutton said. “We have done the work over the last 15-plus years to actually document how we as a church benefited from slavery and, after slavery, how we continued to benefit from the financial marginalization and oppression of Black Americans, and it just didn’t sit well with us,” Sutton said. (Algerina Perna, Baltimore Sun)

Contributing $1 million “is going to hurt us, and it should,” Sutton said.

The vote places the diocese — which includes more than 44,000 congregants in nearly 120 churches in Central, Western and Southern Maryland — among a growing number of religious institutions in the United States that have earmarked large sums specifically for reparations, but it’s the first in Maryland.

Last year, the Virginia Theological Seminary, an Episcopal seminary in Alexandria, established a $1.7 million endowment with plans to use the proceeds to fund reparations for the institution’s ties to slavery.

Princeton Theological Seminary and Georgetown University also announced plans to fund initiatives that would benefit the descendants of slaves, and the Episcopal dioceses of New York and Long Island have made million- and half-million-dollar commitments as reparations committees continued exploring how to invest the funds.

The Episcopal Diocese of Maryland voted at its general convention in 2019 to study the subject of reparations and urge congregations to “examine how their endowed wealth is tied to the institution of slavery.”

Over the past year, the diocese has consolidated its findings that most, if not all, of its churches that were built before 1860 were either built by slaves or by people who benefited financially from slave labor.

Diocesan historians have spent years combing archival materials, including vestry meeting notes, that show the diocese was among the white mainline churches that “had a strong role in creating situations such as [residential] redlining,” said Carrie Graves, canon for communications for the diocese.

“We’ve discovered that our own cathedral [the Cathedral of the Incarnation in North Baltimore] was formed from two congregations that were fleeing the inner city to escape the ‘invasion’ [of Black residents], as it’s called in the historical documents,” she said.

“One of the ‘ahas’ for us was to realize, and to say, that we were complicit in all this. We want to repent, and repentance means making a different choice, turning around. Instead of fostering systemic racism, we want to undo it as best we can together.”

A committee is being formed to determine exactly how the money should be spent.

Sutton, who is African American, said the diocese settled on the million-dollar figure not through a mathematical assessment of damages done but in order to make a clear moral statement.

The amount was judged to be “enough to hurt” and enough to make a difference in living conditions for “impoverished African Americans,” said Sutton, whose jurisdiction is 90% white but amounts to a “cross-section of people of every description — Democrats and Republicans, conservatives and liberals,” as well as people from various countries in Asia, Africa, the Caribbean and Latin America.

The idea is that, while $1 million cannot begin to compensate for slavery and the forms of racial prejudice to which it gave rise — including systems that have prevented Blacks from building wealth through inheritance — it’s something.

“None of us were slave owners,” Sutton said. “That was in the past. None of us should feel guilt. But we all collectively have a sense of responsibility for the effects [of slavery and systemic racism].”

Graves cited the Sutton Scholars Program, a summer initiative by the diocese that helps Black inner-city teens maximize their potential during high school, as an example of the kinds of programs the seed money will support.

And in a pastoral letter he wrote on racial reconciliation last year, Sutton cited other ways church funds could be spent to “heal the brokenness” of systemic racism, from creating partnerships with private companies that can provide job training to establishing urgent care centers, improving housing-assistance programs, and providing community college tuition for members of the African American community. 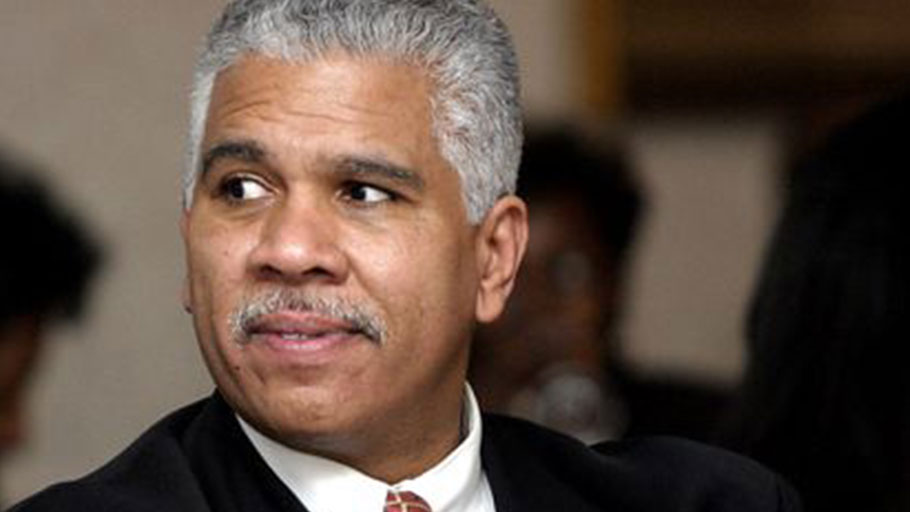 “We’re delighted, and we look forward to their next steps, which will hopefully be systemic and constructive in restoring what was lost by African American communities,” said Hilary O. Shelton, senior vice president for advocacy and policy for the NAACP. (Hans Ericsson / Patuxent Publishing)

Hilary O. Shelton, senior vice president for advocacy and policy for the NAACP, said the national civil rights organization commends the diocese for researching its own culpability, for its commitment in “recognizing the breadth and depth of the damages that have been done” to the African American community and for trying to make sure those damages can be repaired.

“We’re delighted, and we look forward to their next steps, which will hopefully be systemic and constructive in restoring what was lost by African American communities,” he said.

The NAACP is a strong backer of HR 40, a bill in the House of Representatives that recommends the creation of a commission to study the “impact of slavery on the social, political and economic life of our nation.”

For his part, Sutton hopes the diocesan fund will inspire other institutions, religious or not, to take similar actions.

“We want all institutions to look into their history and see how they came to be where they are now financially,” he said. “If you can show that your institution has benefited from slavery, then do the right thing, and that’s what reparation is. Repair it. Pay it back.”