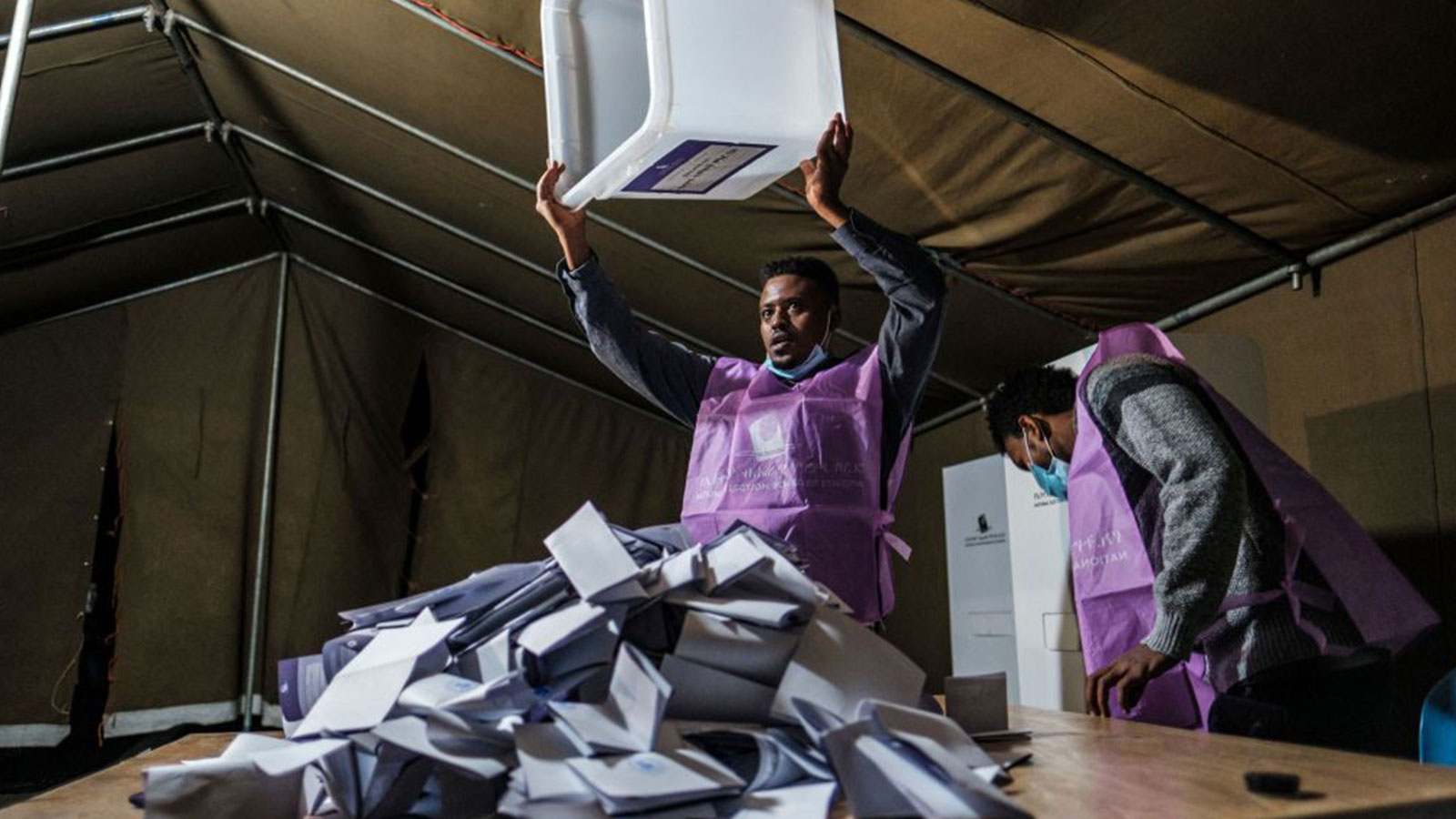 Ethiopia Is at a Crossroads. Can the Nation Survive in Its Current Form?

You Are Here: Home » Blog » Commentaries/Opinions » Ethiopia Is at a Crossroads. Can the Nation Survive in Its Current Form?

After recent national elections and with continued violence in Tigray, Ian Bremmer looks at the future of Ethiopia.

Ethiopia stands at a crossroads. On June 21, the country finally held the first round of long-delayed elections for the country’s parliament and Regional State Councils. Voting in the remaining 69 of the country’s 547 constituencies will take place in a second round in September. It’s not clear when (or if) voting for the 38 MPs from the war-torn Tigray region will take place.

Two things are almost certain in coming days: Election officials will announce that the governing Prosperity Party has won enough seats to form a government with current Prime Minister Abiy Ahmed remaining at its head, and opposition parties will cry foul. Though Abiy’s government will weather the storm, there is more controversy to come as he moves forward with plans to amend Ethiopia’s constitution to change the country’s ethno-federalist structure. Today, Ethiopia’s regions have recognized rights to self-determination. Abiy’s changes would strengthen the country’s federal government at the regions’ expense and create a presidential system of government to political authority. It’s a fight over the essentials of who holds power in an important and potentially unstable country.

That fight has already resulted in bloodshed. In Tigray, combat between government forces and local rebels has killed thousands of people and displaced more than 2 million. Just this week, a government airstrike on a public market in Tigray killed more than 50 people, according to local health officials.

Where did Ethiopia civil conflict come from?

Ethiopia’s troubles have been simmering, and occasionally boiling over, for many years. Despite strong economic growth over the past decade—Ethiopia’s economy generated “strong, broad-based growth averaging 9.4% a year from 2010/11 to 2019/20,” according to the World Bank—youth unemployment has long been a chronic problem, and a violent response to protests based in economic frustration in 2016 led to widespread and increasingly intense demonstrations.

Africa’s second most populous country has a long history of unrest. Its current constitution divides Ethiopia into ethnic territories, and many of the country’s conflicts come from underlying ethnically based political grievances. There are more than 90 ethnic groups living within Ethiopia’s borders, and many feel almost entirely excluded from political power.

In particular, until three years ago, members of the Oromo and Amhara communities, which together make up more than 60 percent of the population, were angry that Tigrayans, who make up just over 6 percent, had dominated Ethiopia’s government since 1991, when the nationalist Tigray People’s Liberation Front ousted Soviet-backed dictator Mengistu Haile Mariam. From 1991 until his death in 2012, Tigrayan Meles Zenawi kept order with an iron fist. Protests finally forced his successor, prime minister Hailemariam Desalegn, to step down in 2018.

Abiy Ahmed, son of an Oromo Muslim father and Amhara Christian mother, replaced Desalegn. Considered Oromo, he is the first member of that group ever to serve as prime minister. His promises for the country’s future quickly drew Western praise. He won the 2019 Nobel Peace Prize, by ending an intractable war with neighboring Eritrea, freeing political prisoners, welcoming exiled dissidents home, pledging to protect a free press, and committing his government to foster a new national unity while respecting ethnic diversity.

But there’s a troubling parallel here with the former Yugoslavia. The end of authoritarian rule in a country divided into ethnic-dominated territories can open a Pandora’s Box of fear, suspicion, and anger among ethnic groups, as it did among Serbs, Croats, Slovenes, Bosnian Muslims, Montenegrins, Kosovar Albanians, and Macedonians in the 1990s. In Ethiopia, ethnic killings began to increase in the country in 2018, displacing nearly three million people during Abiy’s first year in office. Tigray powerbrokers, convinced they would become marginalized by Abiy’s plans, began to talk of secession.

Abiy then responded with what he called a “police action” in Tigray. In November 2020, following an alleged rebel attack on an Ethiopian military base, Abiy launched a military offensive in Tigray. Since then, credible accusations have emerged that Ethiopian forces have used human mass rape, extra-judicial killing and have burned crops, killed livestock, and blocked food aid to starve the region. These actions have drawn condemnation from the Western governments that once saw Abiy as East Africa’s rising star. The U.N. now says that 350,000 Tigrayans face famine. Eritrean forces have also drawn condemnation for deliberately “starving” Tigrayans.

This is the backdrop for the current elections. On Friday, the embassies of Australia, Canada, Denmark, Germany, Ireland, Japan, Luxembourg, New Zealand, Norway, Sweden, the Netherlands, the United Kingdom and the Delegation of the European Union to Ethiopia released a statement that includes the following warning: “These elections have taken place in very challenging and problematic conditions with a restricted political environment, including the detention of opposition members, harassment of media representatives, and parties facing difficulties in freely campaigning. There is a challenging security environment in many areas, and internally displaced people have not been sufficiently registered to vote or included in the elections. The number of women running for office reduced by almost a third from the last general elections.”

This is the crossroads for Ethiopia. Can the nation survive in its current form? Which is more dangerous for its future: An open hand or a closed fist?

Ethiopia has taken many forms over the centuries: empire, kingdom, military dictatorship, constitutional democracy. Its long history of political independence and cultural dynamism makes it one of the world’s most important stories—one too often overlooked outside Africa. This excellent documentary, produced a decade ago, offers an overview.

Ian Bremmer is a foreign affairs columnist and editor-at-large at TIME. He is the president of Eurasia Group, a political-risk consultancy, and GZERO Media, a company dedicated to providing intelligent and engaging coverage of international affairs. He teaches applied geopolitics at Columbia University’s School of International and Public Affairs and his most recent book is Us vs. Them: The Failure of Globalism.