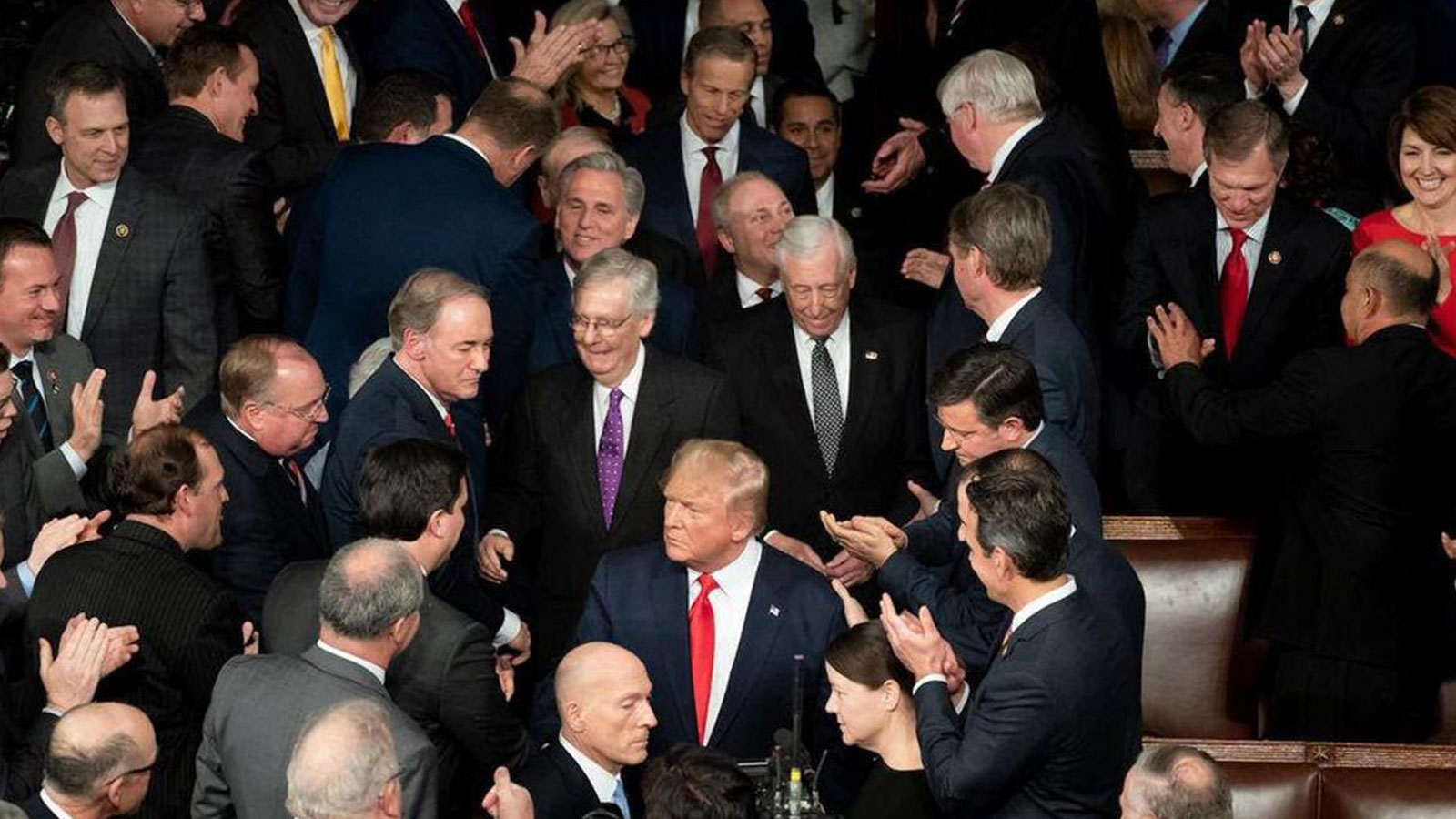 All the Republican Party has left, now that they’ve abandoned any pretense over the past 40 years of supporting working people or even basic infrastructure, is hate, fear and death.

The Rittenhouse verdict sent a shudder through America as terrorists and vigilantes celebrated: one rightwinger called for wholesale slaughter of Democrats saying on Telegram, “The left won’t stop until their bodies get stacked up like cord wood.”

On Facebook, rightwing sites celebrating the verdict were the most popular nationwide by a factor of 9 to 1.

The parents of Anthony Huber, who Rittenhouse killed as Huber tried to disarm him, put out a public statement that said, in part:

“Today’s verdict means there is no accountability for the person who murdered our son. It sends the unacceptable message that armed civilians can show up in any town, incite violence, and then use the danger they have created to justify shooting people in the street.”

A rightwing militia group in New York celebrated in the streets and then put a punctuation mark on their disdain for the law and simple rules of a civil society by entering the NY subway system through the emergency exit, bypassing the toll booths. “Rules don’t apply to us!” they seemed to be shouting, along with, “You can’t stop us!”

Trump wannabees in public office who are still trying to capture the white supremacist and white nationhood vote have doubled down on his strategy of fear, hate, and vigilantism.

Florida Governor Ron DeSantis, for example, recently signed into law legislation that gives legal protections to people who drive their cars into protesters in the street, and defines everybody in any protest as a criminal felon if anybody in that protest breaks a window or engages in other illegal activity.

With DeSantis and other Republican governors pre-exonerating people like the driver who viciously killed Heather Heyer and vigilante protest shooters like Rittenhouse, many are worried that we’re entering a new era where vigilante shooters and drivers-into-crowds will become as normalized and accepted as Amy Vanderpool documents how normalized daily mass shootings have become in America.

Laws similar to Florida’s have been passed or are pending in numerous Republican-controlled states, presumably in anticipation of citizen protests when those states use their newly passed laws to overturn the will of voters in the 2022 and 2024 elections. Object to your politicians handing an election they lost to themselves? You go straight from the streets to the jail, just like in tinhorn dictatorships.

There’s always been a fringe movement of violent white supremacist vigilantes in America, particularly since the end of the Civil War, but they’ve never before been embraced by or succeeded in capturing a political party. Today, astonishingly, that’s the case in our country.

So, what’s motivating today’s vigilantes and the police who often aid and support them, as in the Rittenhouse case?

Centuries ago, as white people fanned out across this continent to occupy land stolen from Native Americans, it usually took years or decades for stable government institutions to be created, including local police forces. Therefore, communities would organize their own forces, called “vigilance committees” whose job was to be “vigilant” to protect their own homes and communities.

That sort of “classic vigilantism” pretty much completely disappeared in the US after the Civil War, however, when the southern-state slave patrols were merged into those states’ militias (what we call the National Guard) and professional police forces, state and local, took over.

Instead, these days it’s almost always a conservative response to cultural change that creates a vigilante backlash.

Virtually the dictionary definition of “conservative” is “opposed to rapid change in society.” That’s why, as America becomes more diverse and states like Texas have become less than 50% white, racist “conservative” factions that have had a home in the GOP since 1968 are turning to violence to try to maintain the absolute dominance of straight white men in American society.

When the US Supreme Court legalized abortion in 1973, for example, those who were opposed to that change in our society, symbolized by the Roe v Wade decision, organized vigilante groups that threatened women outside abortion clinics, followed and harassed women getting healthcare and people who worked in the clinics, and murdered multiple doctors and bombed multiple clinics across the nation.

In the 1980s, conservative billionaires who supported Reagan helped impose neoliberal austerity on America, so for forty years the country has been on a steady decline as jobs went overseas, wages fell so badly the middle class sagged below 50% of Americans by 2015, and a general rage began to build across the country.

Much of that rage was channeled into “anti-government” movements that were encouraged by Reagan, who told us that government was the problem and not the solution. Neoliberal billionaires backed Republican politicians who kept their taxes low while openly and proudly obstructing any government efforts to help working class people.

By this time the GOP had totally embraced neoliberalism and stopped proposing any sort of policies that would lift up America. Instead, their efforts went to subsidizing billionaires with tax cuts, and increasing profits for polluting industries via deregulation.

Working class white people continued to fall behind, particularly in rural areas, as wealthy CEOs and trust-fund billionaires made out like bandits, pouring their surplus cash into the campaigns of politicians because five rightwingers on the Supreme Court legalized political bribery with Citizens United in 2010.

The Republican answer to the growing white angst in the country was to start a movement against affirmative action in the 1980s and 1990s, calling it “reverse racism,” reviving the old saw from the 1950s that “Black people want to take your job!”

Women, since the 1970s, have also been successfully competing for jobs formerly held by white men, building misogynous frustration and rage among lower-income and lower-education white men, and turning incels murderous.

Much of this white male rage was channeled in the 1990s into the fringe “white nationalist” movement, which got their martyrs with Ruby Ridge (1992) and Waco (1993), where heavily armed white supremacists shot it out with the feds and lost terribly.

That provoked Tim McVeigh to follow The Turner Diaries “create a race-based civil war by provoking the government to seize guns so we can fight back” script and blow up the federal building in Oklahoma City on the anniversary of Waco in 1995, killing 168 and injuring 860.

He, however, was condemned by both political parties and ultimately put to death by a Republican president. The GOP had not yet fully turned toward embracing fascists, vigilantes and terrorists in the 1990s.

Modern race-based vigilantism with the support of the GOP took a big step forward after 9/11, when multiple Republican leaders used that crime as an excuse to vilify Muslims specifically and brown-skinned Arabs more generally. Most famously, Donald Trump perpetrated the lie that Muslims in New Jersey were celebrating in the streets the afternoon of 9/11.

George W. Bush took that anti-Muslim energy and amplified it as he pushed a revenge-based war against Afghanistan and Iraq, another Muslim country that had absolutely nothing to do with 9/11.

Following Bush’s presidency, a Black man whose middle name was Hussein became our president, creating a frenzy of bizarre conspiracy theories on the Fox Propaganda Channel and across rightwing internet and social media outlets.

Was Obama a “real” American? Was he really a secret Kenyan Muslim sleeper agent? Was he trying to flip America communist with his radical Obamacare program? Trump and Republicans were asserting that those were all true claims.

With the hard right now empowered by these conspiracy theories on Fox and talk radio, in 2014 Cliven Bundy challenged the authority of the Obama administration to restrict him from grazing his cows on public federal land without paying a grazing fee; Obama flinched and backed down, giving Bundy and armed, anti-government white men a huge national PR victory (as well as getting his cows back).

Two years later his son, Ammon Bundy, attacked and occupied another federal facility, this time the Malheur Wildlife Refuge in Oregon near the Idaho border. His armed vigilantes pointed their weapons at federal officers on live television, and, again, the Obama administration backed down.

Bundy’s 2016 “victory” animated white supremacist vigilantes across the nation and made him enough of a media figure that he’s now running in the GOP primary for governor of Idaho.

Things really stepped up throughout the Trump administration when the new president openly welcomed white nationhood militias and neo-Nazis into the GOP and praised them from the presidential pulpit, something no president had done since Woodrow Wilson hosted the debut of the Klan recruiting film Birth of a Nation at the White House in 1915.

Trump invited vigilantes to the southern border to “help” with the problem of brown-skinned refugees trying to enter the country, and sucked up to police, encouraging them to be even more brutal with (presumably minority) criminal suspects.

His presidency marked a turning point for American politics, with the GOP abandoning any pretense of caring about policy debates to full-on embrace fear and hate of racial, religious, and gender minorities as their core political position and strategy going forward.

As a result, NBC News chronicles, threats against federal officials reported to Capitol Police have about tripled since Trump’s first year in office, reaching over 9000 incidents so far this year.

When we’ve seen these kinds of things happen in other countries, we’ve historically called them out as naked assaults on democracy; now Trump and his armed Republican faction have turned America’s moral and political standing in the world on its head.

International observers have issued repeated alarms about the state of democracy in America since Trump’s 2016 election. In 2017, we were downgraded by The Economist magazine’s Intelligence Unit: instead of being a “full democracy,” we are now a “flawed democracy.” The international think tank IDEA just reported that we’re now a “backsliding democracy.”

Today, while the Democratic Party is working hard to secure benefits to all Americans, the Republicans have only two responses: block legislation and support armed white nationhood vigilantes.

All the Republican Party has left, now that they’ve abandoned any pretense over the past 40 years of supporting working people or even rebuilding our crumbling infrastructure, is hate, fear and death.

As Franklin D. Roosevelt said in his 1933 inaugural address about an earlier generation of Republican obstructionists: “They know only the rules of a generation of self-seekers. They have no vision, and when there is no vision the people perish.”

And if we don’t return to sanity, our democracy could perish as well.

Thom Hartmann is a talk-show host and the author of The Hidden History of American Healthcare and more than 30+ other books in print. He is a writing fellow at the Independent Media Institute and his writings are archived at hartmannreport.com.

Featured image: President Donald J. Trump arrives in the House chamber and is greeted by members of Congress prior to delivering his State of the Union address Tuesday, Feb. 4, at the U.S. Capitol in Washington, D.C. (Official White House Photo by Andrea Hanks)