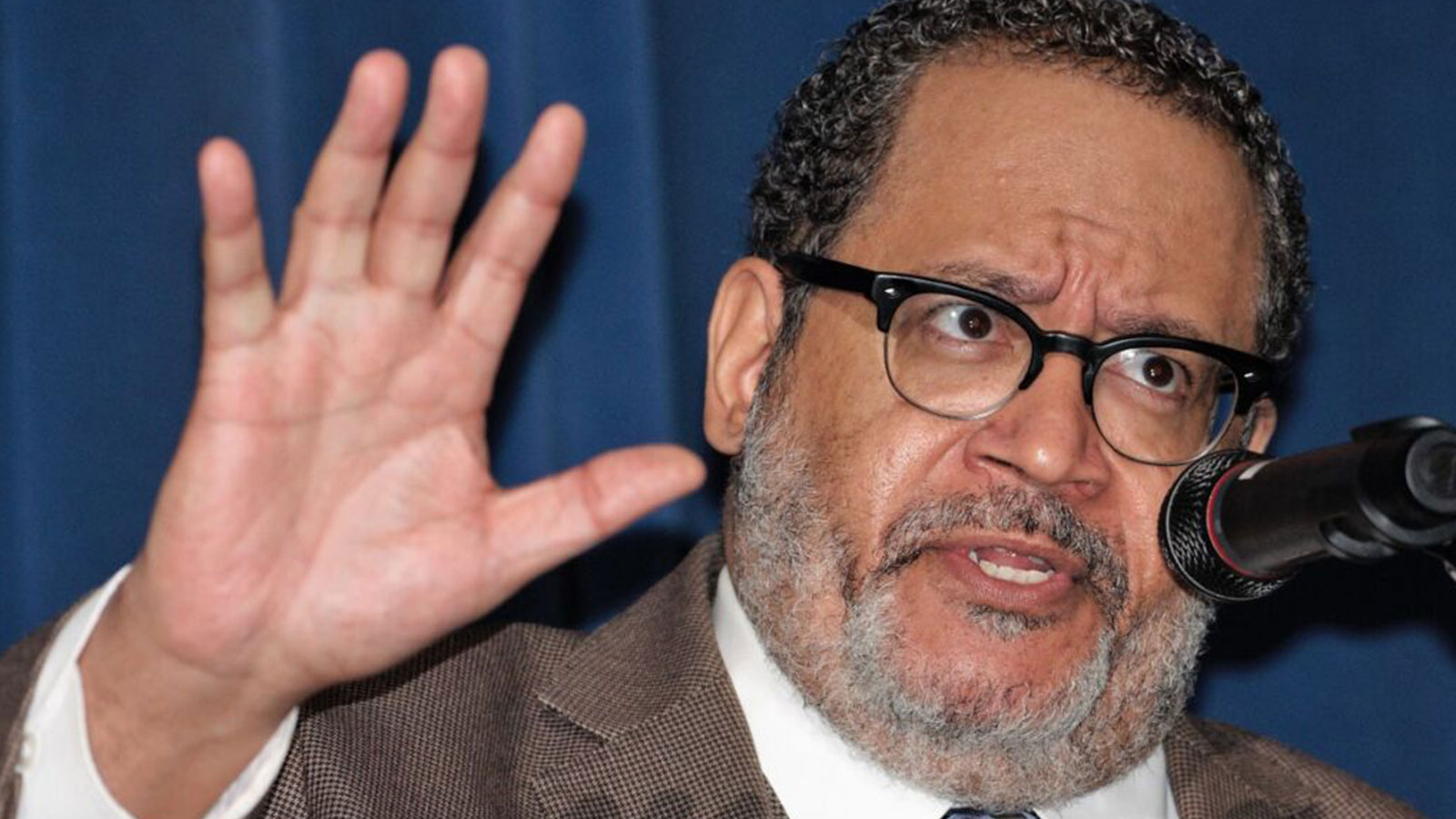 Michael Eric Dyson said the campaign against CRT is nothing but “race baiting” calculated “to scare white folks and make them believe.

Early in his remarks, Dr. Michael Eric Dyson duly warned everybody in the audience:

“I’m easing you into the shock that is me. I’m gonna get here and piss all of you off, and then I’m leaving. So if you’re white and you get mad, hold on. Black people are going to get mad, too.”

The 63-year-old Detroit-born son of an autoworker spoke for 53 minutes in the Tilghman High School auditorium in Paducah, an historic old port town where the Tennessee River meets the Ohio. He deftly blended humor and satire with stinging criticism of racism, sexism, “toxic masculinity,” and hypocrisy in politics, religion, and society.

The crowd of about 350 — white and persons of color, all masked — clapped, cheered, laughed, and sometimes gasped. He got a standing ovation when he finished.

Dyson said the campaign against CRT is nothing but “race baiting” calculated “to scare white folks and make them believe that Black folks are trying to teach their kids to hate them.”

An ordained Baptist minister, Dyson earned a Ph.D. in religion from Princeton University. He teaches African American and Diaspora Studies in the Vandy College of Arts and Science and ethics and society in the Divinity School.

He eschewed Ivy League-speak and talked in an informal vernacular. Dyson started by condensing the famous first line in Charles Dickens’s classic novel, A Tale of Two Cities, by describing 2021 American society as reflecting the best and worst of times.

Dyson, who has written two dozen books and is a frequent guest on national TV news and commentary programs, also invited his listeners to ponder “the enormous progress we’ve made – a Black president of the United States of America. Think about forms of music that have seized the attention of the world. And when we think about America throughout the world, many people meet America through a Black face – Beyoncé, Jay-Z or even Little Wayne.

“… Oprah and Colin Powell and Angela Davis and James Baldwin, Ralph Ellison and Snoop Dogg, Louis Armstrong, Langston Hughes – the measure of the American soul can often be found in the expression of people of color, especially in this case Black people but also Latinx brothers and sisters … Asian and indigenous people, along with white brothers and sisters. In other words, this nation is made up of every creed, color and nationality.

“At our best, we are one … a nation unified. But we can’t be unified at the expense of [not] telling the truth about our history.”

He meant white furor over Critical Race Theory, which seeks to explain how systemic racism has shaped American law and public policy throughout history. CRT is studied at the college and graduate level, notably in law schools, not in grade- and high schools, as conservatives claim.

Nonetheless, right-wing politicians, nearly all of them white Republicans, see CRT as a potent weapon to win white votes. They claim — falsely — that CRT teaches that all whites are racists. Using that pretext, GOP governors and lawmakers are pushing laws to keep CRT out of K-12 schools.

Dyson said it’s imperative that students be taught the truth in history classes. “This is not about beating up on white brothers and sisters .… We should live in the nation together.”

Dyson said the campaign against CRT is nothing but “race baiting” calculated “to scare white folks and make them believe that Black folks are trying to teach their kids to hate them.” He added that evidence points in the opposite direction: “lynching, castrating, raping, stabbing, enslavement – 400 years of it.”

He said victims include Tamir Rice, a 12-year-old African American shot to death in Cleveland by a white police officer in 2014. A grand jury failed to bring criminal charges against the officer.

“Police ride up on him, and in two seconds he is murdered because the vicious jumble of stereotypes that occupies their collective unconscious fuels their suspicions of and skepticism about young Black kids – that’s what we do know,” Dyson said.

Trump carried 118 of Kentucky’s 120 counties, including McCracken, of which Paducah is the seat. Trump collected more than 66 percent of the vote here (and 65 percent last year). “I know some of y’all [white people] voted for that man—Black people, too, now,” Dyson said.

He said before Trump was banished from social media, he daily tweeted “the feces of his moral depravity.” He described Trump as “ugly, nasty, vile, nefarious and severely unintelligent when it came to articulating ideas that were profound.”

Dyson recalled when the Republicans made fun of President Barack Obama for wearing a tan suit. “Obama ‘spoke the king’s English to the queen’s taste,’ unlike 45 – ‘See Dick run.’ [Trump] “thought a dangling participle was a piece of lettuce.”

Trump gave the country four years of “unreconstructed bigotry” and is now the “mendacious big liar.” Dyson said the 2020 election was fair and honest and admonished the former president, “You lost. You got your butt beat. Keep stepping.”

Dyson joked that he wrote “an apology letter to George [W.] Bush: “Dear President Bush: I thought you were the dumbest president, but, boy, was I wrong.”

He didn’t spare from his barbs Blacks who he said benefitted from the civil rights movement only to “turn around and jack up other people. I told the white folks just hang on.”

Dyson recalled the time an African American woman confronted him after he preached at a Cleveland Church. She told him he was going to hell for saying that “God created gay people. … How are you going to stand against vicious racism and white supremacy and turn round and be a male supremacist and a homophobe?”

He also called out Black churches that won’t allow women to be ordained as pastors or serve as church officers. Those that do are elevating “toxic masculinity,” according to Dyson. He pointed out that women were the first people to learn of Jesus Christ’s resurrection. “The men had taken off.”

Dyson said he was fired from a Tennessee church for trying to ordain three women as deacons. The church officers, all men, were guilty of practicing “ecclesiastical apartheid. Black women could clean, cook, and sew, but they couldn’t run the church they numerically dominated. If they left, the tithes were gone, and the church wasn’t going to go nowhere. And yet they were dominated by the narrow conception of masculinity some of which was perpetuated by women themselves.”

He segued to reproductive rights, declaring it was time for “a bunch of old white men [to stop] telling women what they can do with their bodies.”

On other topics, he said the wave of voter restriction laws backed by Republican governors and passed by GOP-majority legislatures are aimed at persons of color, that “the Second Amendment is not the Second Commandment” and that many whites are also standing up for racial justice. He said Black Lives Matter protests have even taken place in communities with few black residents.

He zeroed in on the “Blue Lives Matter” movement. “You ain’t born blue … you’re … born black … cop is a profession. Black is a body and an anatomy, so stop the false equivalency.”

He added: “January 6 … showed what they really thought about blue lives. You ain’t for [all] police people, you’re for police people serving your narrow form of whiteness, of politics and ideology. Those cops [defending the Capitol] were being run over. Those cops were being dishonored and disrespected. Where was your ‘Blue Lives Matter’ then? Where was your respect for the police then?”

Berry Craig is an emeritus professor of history at the West Kentucky Community and Technical College in Paducah and a freelance writer. He is a member of American Federation of Teachers Local 1360, the recording secretary for the Western Kentucky Area Council, AFL-CIO, webmaster-editor for the Kentucky State AFL-CIO and a member of the state AFL-CIO Executive Board. He is working on his ninth book on Kentucky history–this one on Kentuckians at Pearl Harbor. He is a native of Mayfield, Ky., where he lives with his wife of 41 years.