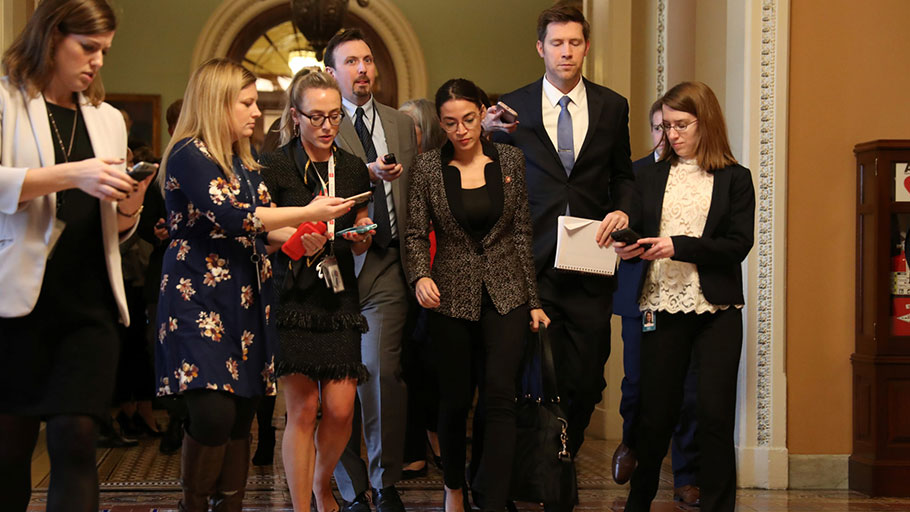 We might as well crown Representative Alexandria Ocasio-Cortez the Don Draper of the beltway—because there’s no mistaking that she has fundamentally re-shaped political conversation in Washington, D.C., offering a cure to bicameral boredom and a fresh approach to problem-solving.

Whatever your position, it is hard to argue that she has brought a new zest and energy to the legislative arena with her unapologetic embrace of socialism and her patient, clear-headed explanations of how a much-maligned, indeed historically verboten, socialist politics can provide a vision and path to empowering people in the political process as well as ensuring people access to healthcare, employment with a decent living wage, and an environment habitable for our families.

And while up until recently America’s abiding anti-communism, a Cold War hangover, meant that associating any idea with socialism or communism guaranteed that idea’s hasty and unquestioned death, such tactics are losing traction.

Mitch McConnell, in bringing a resolution to the Senate floor on the Green New Deal, hoping to kill it, called the initiative “a socialist makeover of the entire US economy.”

But that hasn’t stopped the conversation. Indeed, J.P. Morgan Chase CEO Jamie Dimon felt compelled to address the shortcomings of socialism in a recent letter to shareholders, as I’ve recently covered in the pages of PoliticusUsa. Has it even been imaginable in recent years that a corporate leader would feel threatened enough by socialism that it needed even to recognized in argument as a possible, if not increasingly formidable, opponent to Chase’s economic and political interests?

Again, no doubt fueled by some of the groundwork Senator Bernie Sanders laid in his 2016 Democratic primary campaign, Ocasio-Cortez has altered the conversation.

For all the talk about socialism and the Green New Deal, though, what really drives Ocasio-Cortez, what is really at the root of her thinking, is her recognition of the need to achieve democracy in America in the most fundamental of ways and in ways, at least in my experience, most Americans rarely think about.

When I teach issues of work and class in the United States and when I talk to people, I notice that few students and people in general really have no expectation of having any say at their jobs. For the most part, it goes without question that most of us work for other people and carry out our job duties as the boss instructs to serve the objectives of the company or organization for which we’re working.

That is, we by and large have no expectation and don’t even ponder experiencing democracy in the workplace. We tend to accept, in a nation we like to believe is characterized by its democratic form of governance, that for forty to sixty hours each week while at work, we do not live in a democracy.

It this lack of democracy that Ocasio-Cortez seems to want to address at its root.

In a recent interview at the ‘South by Southwest” tech conference in Austin, Texas, she explained that “the emphasis in democratic socialism is on democracy,” elaborating precisely the urgency in focusing on workplace democracy. She stresses,

“It’s just as much a transformation about bringing democracy to the workplace, so we have a say and we don’t check all of our rights at the door every time we cross the threshold into our workplace. Because at the end of the day, as workers and as people in society, we’re the ones creating wealth.

Indeed, as Michael Zweig has argued in his book, The Working Class Majority:  Kept Secret:

“On the job, most workers have little control over the pace and content of their work. They show up, a supervisor tells them the job, and they do it. The job may be skilled or unskilled, white collar or blue collar, in any one of thousands of occupations. Whatever the particulars, most jobs share a basic powerlessness in relation to the authority of the owner and owner’s representatives who are there to supervise and control the workforce.”

Indeed, most of us have little say in how our work is organized, what gets produced in our factories, how resources are used and distributed. In short, we are not involved in making most of the key decisions about how our world is run. And, for the most part, in my observation, people don’t expect to have a say. We tend as a culture and people not to think about democracy in the arena of the workplace and of production more generally.
Ocasio-Cortez pushes us to think again, to re-think democracy.

The governing behavior of a businessmen-turned-politicians like Trump, who is leaving misery in his wake and destroying democracy, is a perfect example of the lack of democracy we experience each day while spending all our time and energy reproducing the world in which we live.

As we see elected leaders and hopefully voters challenge Trump in the governmental arena, Ocasio-Cortez is insisting we extend our impulses for democratic behavior to the workplace and larger economy as well.