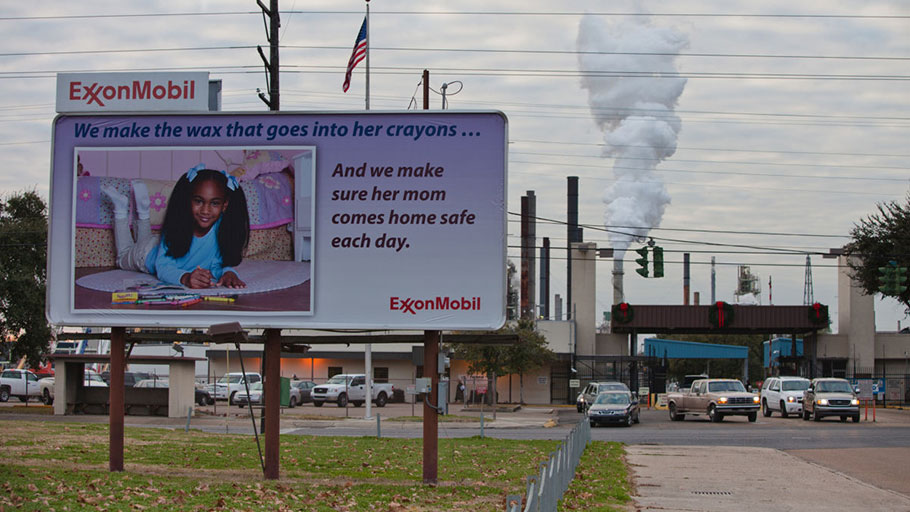 The ExxonMobil refinery in Baton Rouge, Louisiana, is part of a large concentration of chemical and oil companies known as “Cancer Alley.” A new report finds that the fossil fuel industry is denying the reality of air and water pollution, or even shifting the blame for this pollution to those disadvantaged communities who are suffering the impacts of the industry’s projects.

The fossil fuel industry regularly deploys manipulative and dishonest tactics when engaging with communities of color, often working to co-opt the respect and authority of minority-led groups to serve corporate goals. That is according to a new report, “Fossil Fueled Foolery,” published today by the National Association for the Advancement of Colored People (NAACP), which outlines the top 10 manipulation tactics that the group’s members and partners routinely observe.

Some of the tactics are broad and political, like investing in efforts to undermine democracy through voter suppression and other means, or like financing political campaigns and “investing in” politicians at local, county, and state levels. Other tactics are even more discreet and deceitful, like claiming that regulations that would benefit heavily polluted communities will cause these same communities economic harm.

Or, in other instances, denying the reality of air and water pollution, or even shifting the blame for this pollution to those disadvantaged communities that are suffering the impacts of fossil fuel projects.

“One of the most duplicitous strategies of the fossil fuel industry is manipulating messaging which feigns concern for the welfare of low income and communities of color. This is a self-serving effort to maintain their wealth,” said Kathy Egland, Chair of the NAACP National Board Committee on Environmental and Climate Justice, in a statement.

The report itself is intended to serve as a primer for local branches and chapters of the NAACP, to ensure that they are “fully aware of the practices employed by too many in the fossil fuel industry,” according to lead author Jacqueline Patterson, Senior Director of the NAACP’s Environmental and Climate Justice Program.

These tactics recall the strategies of the now-defunct Fueling U.S. Forward campaign, a Koch Industries-funded effort that overtly targeted minority communities to promote the “importance of domestic oil and natural gas to making people’s lives better,” as the group’s President Charles Drevna put it.

A New York Times article in early 2017 exposed how Fueling U.S. Forward sponsored events in communities of color, like a Christmas gospel concert in Richmond, Virginia, where the DJs raffled off utility bill payments and shouted out fossil fuels.

Though few in the crowd knew it, the concert had a powerful sponsor: Fueling U.S. Forward, a public relations group for fossil fuels funded by Koch Industries, the oil and petrochemicals conglomerate led by the ultraconservative billionaire brothers David H. and Charles G. Koch. About halfway through the event, the music gave way to a panel discussion on how the holidays were made possible by energy — cheap energy, like oil and gas.

The concert flier was adorned with a red car bearing Christmas gifts. “Thankful for the fuels and innovation that make modern life possible,” it read.

The event was held at a community center in the predominantly African-American East Highland Park neighborhood of Richmond, a city overwrought with industrial factories and rampant air pollution that ranks as one of the deadliest “asthma capitals” in the country, according to the Asthma and Allergy Foundation of America.

Richmond was, at the time, also the heart of debate about the future of the Atlantic Coast pipeline, a natural gas line proposed by Dominion Energy that would carry fracked natural gas 600 miles from West Virginia to North Carolina, requiring a number of polluting compressor stations to keep the gas moving along its path.

When he learned of Fueling U.S. Forward’s efforts in Richmond, Eddie Bautista, executive director of the NYC Environmental Justice Alliance, called the campaign “an exploitative, sad and borderline racist strategy.”

The NAACP report describes many campaigns and efforts deploying tactics similar to Fueling U.S. Forward. In one instance, the utility Duke Energy was targeting African-American community leaders in North Carolina to push the message that “solar hurts the poor.” In another, ExxonMobil and other oil and gas companies donate millions to the National Black Chamber of Commerce (NBCC), which then took public positions opposing clean energy policy and supporting fossil fuel development.

Patterson emphasizes that these tactics can only work if groups like the NAACP and its local partners aren’t aware of the true human and economic costs of fossil fuel exploitation, or if they’re not willing to push back against it. The report describes at length the health and financial harms that coal, oil, and gas bring to the communties they cross, and how these harms are disproportionately impacting people of color.

(See Julie Dermansky’s series, Cancer Alley, for her in-depth reporting on the environmental and potential health impacts of the petrochemical industry in Louisiana.)

The authors also include positive examples of how state and local NAACP chapters and frontline communities have resisted and fought for clean energy solutions that would bring wide-reaching benefits. These cases, said Patterson, show how local leaders “see these machinations for what they are, resist, and lead in the transition to a new, sustainable, and just energy economy.”