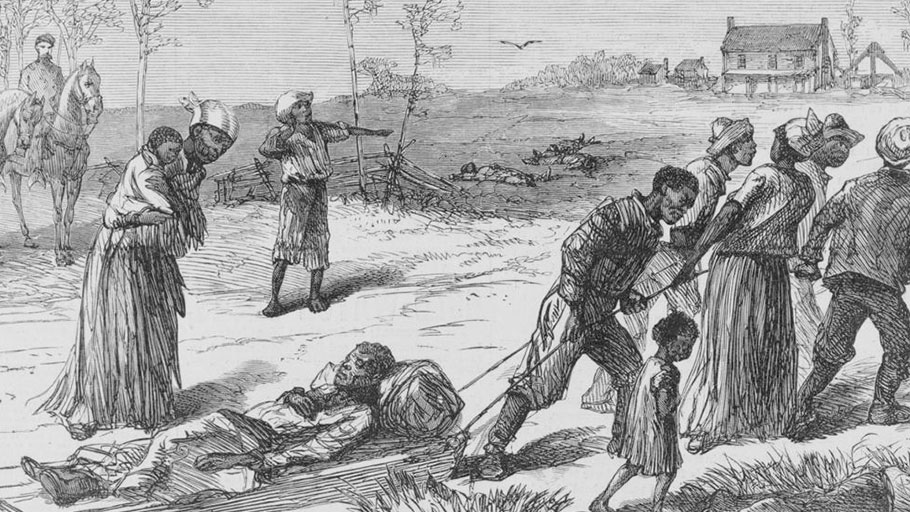 You Are Here: Home » Blog » Commentaries/Opinions » Do guns preserve freedom?

Many conservatives believe they do. In one representative example, National Review‘s David French argued that we need a heavily armed citizenry in case the government turns tyrannical and America’s private gun owners need to wield the threat of gunning down police and soldiers to preserve their liberty.

For the Second Amendment to remain a meaningful check on state power, citizens must be able to possess the kinds and categories of weapons that can at least deter state overreach, that would make true authoritarianism too costly to attempt. [National Review]

Liberals typically wave such arguments away as a nonsense hypothetical. Are small arms — and even AR-15s — really going to be useful against armored cavalry, heavy artillery, and drone strikes? (For his part, French concedes this point: “The argument is not that a collection of random citizens should be able to go head-to-head with the Third Cavalry Regiment. That’s absurd.”) And as Ed Kilgore notes, this conservative interpretation of the Second Amendment is extremely recent — not to mention that it’s a bit rich to hear coming from people who typically scream themselves hoarse about supporting the troops.

But let’s actually engage with this conservative argument on its merits. Indeed, history provides us many examples of times when people might have had an opportunity to use small arms against a tyrannical state. Did it work?

The results are not encouraging for Second Amendment absolutists.

Consider the American South, which was a brutal tyranny for most of its existence. First there was 250 years of chattel slavery, followed by about 12 years of genuine multi-racial democracy, followed by 90 years of Jim Crow tyranny — a racial caste system whose political foundation was white supremacist terrorism.

Those 12 years constitute Reconstruction, when the Republican Party under men like Thaddeus Stevens, Charles Sumner, and Ulysses S. Grant used federal government power to enforce democratic institutions on the defeated Confederate states. President Grant directed occupying troops to preserve order and supervise fair elections, and used the newly established Department of Justice and the Enforcement Acts to suppress the KKK, which at the time was basically coextensive with the Democratic Party in the South. Where local juries would not convict due to threats and acts of terrorism, Grant’s Attorneys General Ebenezer Hoar and Amos T. Akerman brought in federal ones, and even temporarily suspended habeas corpus on occasion. These were harsh tactics indeed — but it was a brilliant success.

However, eventually Northern Republicans grew tired of democracy, and fell under the sway of quisling Liberal Republican racists like Sen. Carl Shurz and The Nation‘s E.L. Godkin. When an economic collapse could not be fixed with orthodox hard money policy, Republicans lost their House majority and Grant’s political strength was severely sapped. In 1876, the party effectively agreed to give up their most loyal voting block — black Southerners — in return for the presidency.

Throughout this time black Americans faced constant terrorism from whites. Many quite understandably armed themselves, especially the hundreds of thousands of black Union veterans. This did serve as some moderate protection while Reconstruction lasted. But when no-holds-barred confrontation broke out, blacks almost always lost horribly against wealthier and hence better-armed whites. As but one example: In Colfax, Louisiana, in 1873, black Republicans and state militia members were defeated by white paramilitaries (including many ex-Confederates) armed with a cannon. Some 150 were massacred, including many after they surrendered.

After Northern Republicans abandoned their black voters to the KKK in 1876, though, blacks stood no chance of resisting what was essentially state-endorsed white terrorism by force. Those paramilitaries and terrorists became the state government, “elected” through violence and fraud. What arms blacks had were mostly taken easily, and a racial caste system was reimposed. They faced not just the threat of overwhelming violence for any perceived slight, but the reality that any uprising would create a psychotic, murderous backlash against the entire black community. Indeed, completely innocent random black men were routinely butchered alive in front of picnicking white crowds, a gruesome ritual that (as intended) instilled bone-deep fear in the Southern black community.

The Civil Rights Movement used nonviolent tactics to break Jim Crow not through guerrilla war, but by demonstrating the reality of white tyranny, and (among other things) thus inviting superior federal government power to forcibly reimpose democracy on the South, again up to and including occupying troops.

Guns had nothing to do with warding off tyranny. Armed blacks who tried rising up against a tyrannical government failed. Guns were not the answer.

Something very similar played out in apartheid South Africa. Despite the fact that black South Africans have always been a gigantic majority in the country, Umkhonto we Sizwe (the armed wing of the African National Congress) had little success breaking apartheid through guerrilla tactics. On the contrary, the white minority apartheid government was largely successful in suppressing the movement — including the imprisonment of Nelson Mandela, who was convicted of sabotage in 1964.

How did black South Africans eventually prevail? Not through armed resistance, but instead clever diplomacy, international solidarity in the form of boycott, divestment, and sanctions.

All this is not to say that use of guns against state power cannot achieve political ends. It can. In rare cases, those ends might even be worth achieving — like the Civil War. But one has to connect means and ends. And the fact of overwhelming federal military power means that if a real tyranny does get going in the United States, no number of light arms is going to preserve your freedom. You may have reasons for wanting to keep your guns — but suggesting that your firearms provide some sort of bulwark against state tyranny is just ludicrous.