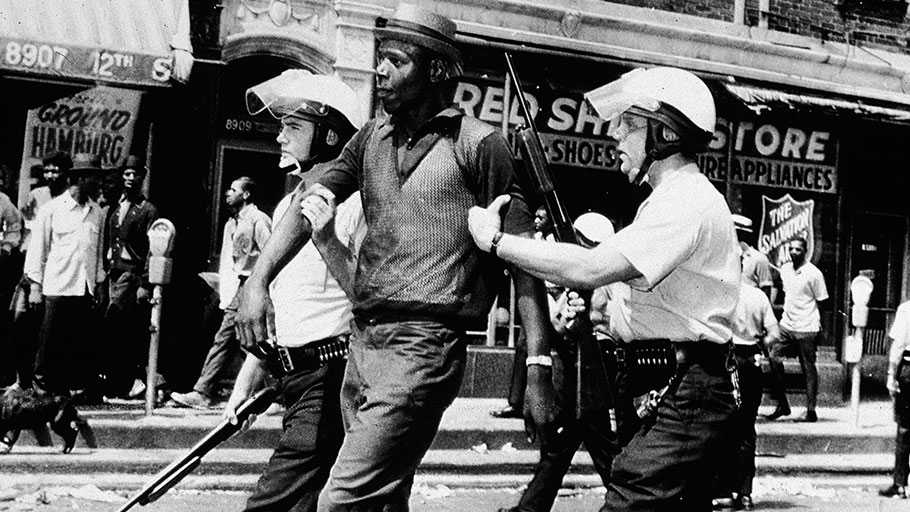 Half-century of US civil rights gains have stalled or reversed, report finds

You Are Here: Home » Blog » News & Current Affairs » Half-century of US civil rights gains have stalled or reversed, report finds

The Kerner Commission was formed amid riots in Detroit in 1967. Photograph: American Stock/Getty Images

Civil rights gains of the past half-century have stalled or in some areas gone into reverse, according to a report marking the 50th anniversary of the landmark Kerner Commission.

Child poverty has increased, schools have become resegregated and white supremacists are becoming emboldened and more violent, the study says.

“Don’t let anybody tell you that the problem is Donald Trump,” the Rev William Barber, a prominent North Carolina pastor, told a conference launching the 469-page report in Washington on Tuesday. “Long before Trump mastered a modern-day version of the con of the southern strategy, he had an audience that had been cultivated for 50 years.”

President Lyndon Johnson formed the original 11-member Kerner Commission as Detroit was engulfed in a race riot in 1967. The commission’s report concluded: “Our nation is moving toward two societies, one black, one white – separate and unequal.”

Johnson’s major policy initiatives, the “great society” and “war on poverty”, had a positive impact, according to the new report, Healing Our Divided Society: Investing in America Fifty Years After the Kerner Report. The African American achievement gap in reading decreased by half during the early 1970s and early 1980s.

The report adds, however, that with the elimination of major federal programmes under Ronald Reagan during the 1980s, the achievement gap in reading grew once again and is now 30% bigger than it was 30 years ago.

Fred Harris, the last surviving member of the Kerner Commission, told Tuesday’s conference at George Washington University: “We made progress on virtually every aspect of race and poverty for nearly a decade after the Kerner report and then that progress slowed, then stopped and in many ways was reversed, so that today racial and ethnic discrimination is again worsening. We are resegregating our cities and our schools, condemning millions of kids to inferior education and taking away their real possibility of getting out of poverty.”

Harris, a former Democratic senator from Oklahoma and co-editor of the new report, added: “There are millions more poor people today than there were then. There’s greater child poverty; poverty’s harder to get out of. More poor people are in deep poverty than was true 50 years ago and income inequality is worse now and worsening.”

The report says the percentage of American children living in poverty increased from 15.6% in 1968 to 21% in 2017. The percentage of people living in deep or extreme poverty – defined as less than half the poverty threshold – has also gone up since 1975.

After a dramatic improvement in racial integration in education, especially in the south, court orders and housing patterns have led to a resegregation of public schools. In 1988, about 44% of black students went to majority white schools nationally; only 20% of black students do so today.

Three decades after the Fair Housing Act of 1968, black homeownership rose by almost 6%, but those gains were wiped out from 2000 to 2015, the report continues. It blames the decline on the disproportionate effect that the subprime mortgage lending crisis had on African American families.

Mass incarceration has increased the prison population from about 200,000 at the time of the Kerner Commission to about 1.4 million today, it also notes. African American men are nearly six times as likely to be incarcerated as white men.

Catherine Lhamon, chair of the United States Commission on Civil Rights, told the audience: “We have seen other times since the Kerner Commission when presidential administrations and Congress tested our ideals. Speaking for myself, I think of the Reagan administration as the nadir for civil rights before now but what worries me is this Trump administration is taking a page from the Reagan playbook and consolidating it. That scares me, frankly, and that is what I think needs to drive all of us for a meaningful call to action.

In his address, broadcast via video link, Barber highlighted the importance of voter suppression in states that can make all the difference in elections. “We have less voting rights today than we had on August 6, 1965, when the Voting Rights Act was passed,” said Barber, president of Repairers of the Breach, a religious and social justice not-for-profit group.

“This, my friend, is the election hacking no one wants to talk about because it would force us to deal with systemic racism in America, and study after study shows us that the political landscape would look very different without voter suppression.”