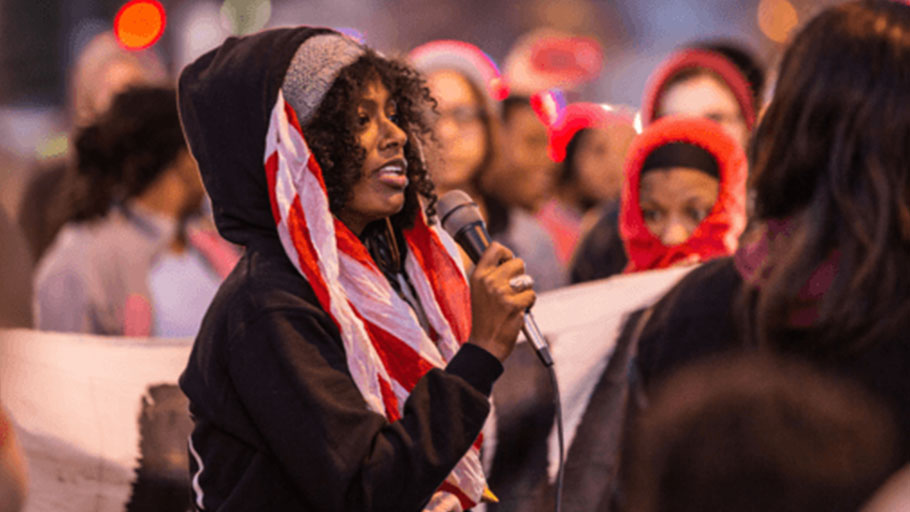 You Are Here: Home » Blog » Commentaries/Opinions » Notes on the Capitalist Origins of Racial Oppression in the United States

When white people shed exculpatory myths and acknowledge the truth about slavery, they’ve arrived at what descendants of enslaved people know about only too well. But they need not stop there. They could test the proposition that historical memory contributes to undermining racial oppression.

Members of a small family group – myself included – showed up September 25, 2017 at the Freedom House Museum in Alexandria, Virginia. The museum tells the story of the wealth–producing Franklin & Armfield slave – trading firm. The building where it’s located served as the firm’s headquarters and “slave pen.” We were there because we are kin to the firm’s owners, Isaac Franklin and John Armfield.

There we spoke of our “grief for the terrible suffering of enslaved people once imprisoned here.” We affirmed commitment to justice and racial equality and condemned the “silence of generations” in our own family. A Washington Post story on the visit was vague about our future plans. Indeed, they aren’t well formed.

We were on a truth-telling mission with modest ambitions.  To talk about family is one thing, but to understand the societal realities that gave rise to racial oppression is another. That requires systematic inquiry. The approach of so-called scientific socialists of the 19thcentury is on tap.

Evaluation of realities evident through facts, data, the historical record, and first-hand observations leads to methodology for changing society. That’s a process allowing people to change their own history. Here we sift through some relevant realities and commentary.

Historians are rethinking slavery.  Harvard University historian Sven Beckert  writes that,  “While their works differ, often significantly, all insist that slavery was a key part of American capitalism—especially during the 19th century, the moment when the institution became inextricable from the expansion of modern industry—and to the development of the United States as a whole.”

And, “That legacy is still with us today. The great inequalities, both domestically and internationally, that characterize the world we live in are at least partly the result of capitalism’s long and violent history.” Beckett’s own Empire of Cotton: A Global History joined this new wave of slavery studies.

The realities of oppression following slavery’s end are clear, among them:  exploitation of black farmers, convict leasing, lynching, Jim Crow, denial of political rights, and genocidal massacres. Southern elites did profit from the labor of black farmers and of rented-out convicts, as they did with slavery. But, so far, direct linkage between the other offenses and capitalism is less well-defined.

The grim story of Ossian Sweet illustrates early 20th century oppression bolstered by race-hatred and an ethos of extreme individualism.  Sweet, a poor, black child living in Florida, traveled alone to Ohio for schooling. After graduation from Howard Medical School, he was a doctor in Detroit. According to Kevin Boyle’s magnificent narrative (Arc of Justice, Holt, 2004), Sweet was striving for wealth and middle-class respectability.

In 1925 Sweet and his wife purchased and moved into a “bungalow” beyond the bounds of Detroit’s black ghetto.  A mob of whites attacked. Sweet and others defended themselves. Someone died and they were tried on a murder conspiracy charge. Their lawyer, the famous Clarence Darrow, persuaded a jury they were innocent. Ossian Sweet never lived in his house. His wife and child soon died of tuberculosis. Sweet killed himself.

Darrow explained before the trial that, “I had lived in America because I wanted to … The ancestors of the negroes came here because they were captured in Africa and brought to America in slave ships, and had been obliged to toil for three hundred years without reward. When they were finally freed from slavery they were lynched in court and out of court, and driven into mean, squalid outskirts and shanties. … I realized that defending negroes, even in the north, was no boy’s job.”

Darrow was on a solo rescue mission. Ossian Sweet, heroic in his own way, wanted “to rise in his profession and make his fortune,” says Boyle. Individual heroics, it seems, won’t free U.S. society from racial oppression.

Historically, race-hatred, which destroyed Sweet, became a tool for enforcing divisions among working-class people and for stratifying society by wealth. The object was to block unifying against oppression, and not just racial oppression.

Martin Luther King Jr. looked at inequalities in his era and drew conclusions. He told staff members of the Southern Christian Leadership Conference two years before he died that, “You can’t talk about ending the slums without first saying profit must be taken out of the slums. . . . There must be a better distribution of wealth . . . And maybe America must move toward a democratic socialism.”

Addressing the 11th annual SCLC convention in August, 1967, King asked, “Why are there forty million poor people in America?” And, “when you begin to ask that question, you are raising a question about the economic system, about a broader distribution of wealth. … [Y]ou begin to question the capitalistic economy. And I’m simply saying that more and more, we’ve got to begin to ask questions about the whole society …Now, when I say questioning the whole society, it means ultimately coming to see that the problem of racism, the problem of economic exploitation, and the problem of war are all tied together.”

Crucially, King declared that, “Your whole structure must be changed. A nation that will keep people in slavery for 244 years will “thingify” them and make them things.” That nation “will exploit them and poor people economically. And a nation that will exploit economically will have to have foreign investments and everything else.”  For King, U.S. society rendered some people as being of no account, as disposable.  They are objects. To fit them to the purposes of the rich and powerful, anything goes.

A scientific approach calls for realities being studied and analyzed and on that basis problems being identified and strategies being created for real societal change.  They entail the building of unity and common fight against economic exploitation. Barriers of hate and fear are broken down. Human solidarity emerges as a cause. In that regard, the revolution we need is heir to France’s original democratic revolution, with its “Liberty, Equality, and Fraternity.”

The democratic alternative to U.S. – style capitalism is, of course, socialism.  Lessons emerge from this exercise pointing to ethics and morality as necessary elements of the socialism we want. The historical record and a bevy of facts display offenses against democracy. U.S. socialism will thus be homegrown, and in the American grain. To head in that direction is hardly bizarre. Besides, where else is there to go?