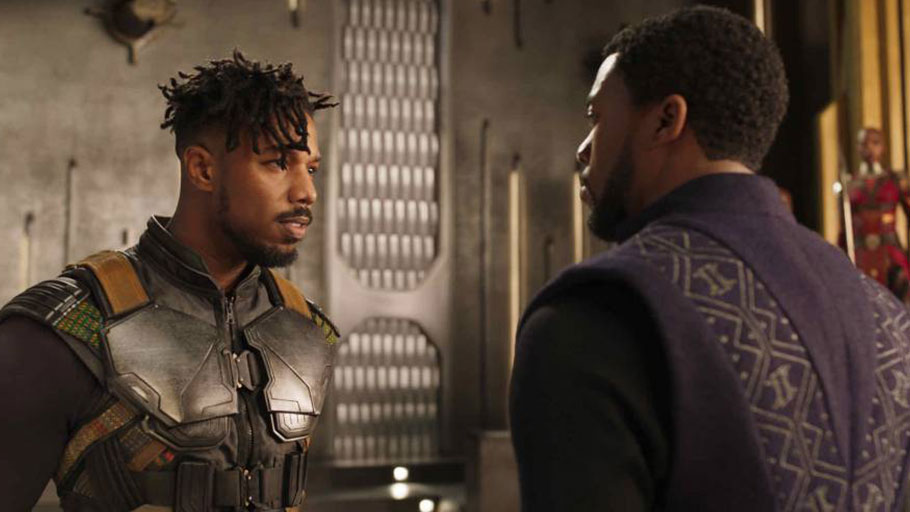 Why “Black Panther” Is Revolutionary, Even Though It Isn’t

You Are Here: Home » Blog » Commentaries/Opinions » Why “Black Panther” Is Revolutionary, Even Though It Isn’t

How many Hollywood films delve into the political economy of colonialism?  We’ve had plenty of popular films that offer color-blind multiculturalism (like “Star Trek,” or the soon-to-be-released “A Wrinkle in Time”), featuring black characters but in ways completely decontextualized from black and African history.  Some even grapple with issues of race and racism (like recently, “Get Out”).  But Hollywood does not generally take on global political economy.  Here, black and African history, and a critique of colonial political economy, are central to the plot as well as to the aesthetic of the film.

In “Black Panther” we see with crystal clarity how, as Guyanese historian Walter Rodney so brilliantly showed, Europe Underdeveloped Africa, through the counter-history of an African country that managed to evade colonization and travel its own path to development.  Director Ryan Coogler says that he was inspired to imagine Wakanda on a visit to Lesotho, but Wakanda also invokes the maroon communities of the British Caribbean or the palenques or quilombos of South America, where blacks who escaped from slavery established autonomous communities on American soil, reviving or recreating African or neo-African forms of governance and culture.  Some of these communities, like Palmares in Brazil, evaded European conquest for decades or generations.  Some, like the Jamaican Maroons, signed treaties to coexist with European colonial powers.  Contemporary author Christian Parenti, interviewing Assata Shakur in Havana, called her a “Post-Modern Maroon in the Ultimate Palenque.”

“Not only does the film take on the political economy of colonialism in Africa, it also raises the question of how colonialism shaped the African diaspora.”

The palenque was revolutionary not because it was a utopia of economic, social, racial, and gender equality or collective ownership of the means of production, but because it claimed autonomy from the hegemonic colonial order and, contra Margaret Thatcher, proved that in fact “there is an alternative.”  Its very existence inspired flight or rebellion by those still enslaved.

African-born and Afro-descended peoples were not the only ones to flee or resist oppressive colonial society in the Americas.  Native peoples recreated kingdoms, established small villages, and maintained liberated spaces outside of European colonial control, from Vilcabamba in sixteenth century Peru to comanchería in the American West or the rochelas of northern Colombia in the nineteenth century to the Zapatistas in Chiapas and the Amazonian tribes resisting oil exploration of the twenty-first.  Colonial domination of the Americas has consistently and repeatedly been resisted by peoples refusing colonization and claiming self-determination and autonomy.

Colonizers insisted (and continue to insist) that the peoples of color they colonized were primitive, barbaric, and incapable of self-government or economic development—that they were peoples without history, trapped in a primitive past and obstacles to modernity.  The quest for a different kind of modernity:  non-European, non-capitalist, non-white—motivated most of the twentieth century’s revolutions.  Antiguan author Jamaica Kincaid beautifully captured the links among colonialism, capitalism, and racism, and suggests why resistance to colonial rule encompassed a liberatory imagination that necessarily imagined overturning the whole social order.  Her tome is written as an unsolicited letter to Antigua’s British colonizers:

Wakanda asks us to imagine not just refuge from colonial domination, but an autonomous African path to modernity, technological development, and economic development.  It’s based on the conceit that Wakanda was able to escape European colonial pillage and rule, and was actually able to develop its own social, economic, and cultural forms.  Critics have been quick to complain that Wakanda is a monarchy, that it’s tribal, that it’s male-dominated, that the film asks us to glorify the wealth and power of the royal family.  “More like Kuwait than Denmark,” one of my colleagues remarked.  But that’s not the point.  Wakanda aspires to be neither Denmark with its colonial wealth, nor Kuwait with its exploitation of foreign migrant labor and economy based on the export of fossil fuels.  Rather, it harks to movements for food sovereignty, autonomy, and rejection of a colonial world system and economy.

The diaspora is represented primarily through the character of Eric Killmonger, the black American pretender to the throne who on the surface appears to be the film’s villain.  In a thoughtful piece in the Boston Review, Christopher Lebron argued that the film engaged in “shocking devaluation of black American men.”  While Wakanda survives and thrives by withdrawing from the world, Killmonger argues that Wakanda’s miracle mineral should be used for a global black liberation struggle.  For Lebron, the film discards Killmonger’s revolutionary vision: “Rather than the enlightened radical, he comes across as the black thug from Oakland hell bent on killing for killing’s sake—indeed, his body is marked with a scar for every kill he has made. The abundant evidence of his efficacy does not establish Killmonger as a hero or villain so much as a receptacle for tropes of inner-city gangsterism.”  For Lebron, the main message of the movie is “the bad guy is the black American who has rightly identified white supremacy as the reigning threat to black well-being; the bad guy is the one who thinks Wakanda is being selfish in its secret liberation; the bad guy is the one who will no longer stand for patience and moderation—he thinks liberation is many, many decades overdue. And the black hero snuffs him out.”

But I think the film could be read differently.  If Killmonger is the villain, he is a decidedly complex and tragic one, and his life story could also be read as a trenchant critique of empire.  Wakandans may have taken advantage of their isolation to develop their own society, but it’s Killmonger who has lived and truly analyzed the political economy of colonialism.  He goads a (white) guide at the British Museum into explaining the provenance of the African artifacts there, then turns on her to demand “How do you think your ancestors got these? Do you think they paid a fair price? Or did they take it, like they took everything else?”

“The film asks us to think about the impact of 500 years of European colonialism on Africa and the African diaspora, and to imagine both what could have been, without colonialism, and what could be, if colonialism is overturned.”

Killmonger’s vision for black liberation has been distorted, not by his advocacy of violence to overthrow white supremacy, but by the non-Wakandan, American, white supremacist world that formed him.  In particular, his military service for the U.S. empire, serving the colonial enterprise in Iraq and Afghanistan.  When Killmonger boasts that “the sun will never set on the Wakandan empire” he is clearly reflecting his imperial education.  Neither his glorification of violence – nor, by extension the violence that has plagued the black community in the heart of empire (“Everybody dies, it’s just life around here,” Killmonger says of Oakland)– nor his attraction to the colonialist mentality grow from his blackness.  Rather, they are a reflection of the empire that trained and armed him.

The film ends with Wakanda’s king returning to the gritty Oakland basketball court where the young Killmonger was playing when his father was murdered.  The king comes bearing technology and promises.  For Lebron, his promises of aid embody “the preferred solution of mega-rich neoliberals: educational programming.”  This is one possible interpretation:  I too felt my heart sink that such a powerful film would end on such a weak note.  But perhaps the promise to bring technology, aid, and education to the inner city could also be seen in the context of revolutionary liberation movements from the Black Panthers to the Cuban Revolution, which in some ways enacted their revolutionary vision by creating Che Guevara’s one, two, three, many Wakandas.  That is, political liberation means nothing without socioeconomic transformation, and whether it’s community breakfast programs or free health care, these are precisely the kind of rights that Third World communities at home and abroad are fighting for.  Whether programs like these come through paternalistic charity aimed at sustaining the larger, unjust social order, or through a revolutionary project to overturn it, depends on the context.  In the end, despite some ambiguity, I think the context of the film allows us to understand Wakanda’s stance as revolutionary solidarity rather than charity.

Because this film is not just about poverty and it’s not just about race: it’s about colonialism.  (“Don’t scare me like that, colonizer!” Shuri exclaims to the white CIA agent.)  The film asks us to think about the impact of 500 years of European colonialism on Africa and the African diaspora, and to imagine both what could have been, without colonialism, and what could be, if colonialism is overturned.  To me, that’s revolutionary enough.

Aviva Chomsky’s most recent book is Undocumented: How Immigration Became Illegal (Beacon Press, 2014). She is professor of history and coordinator of Latin American studies at Salem State University in Massachusetts.