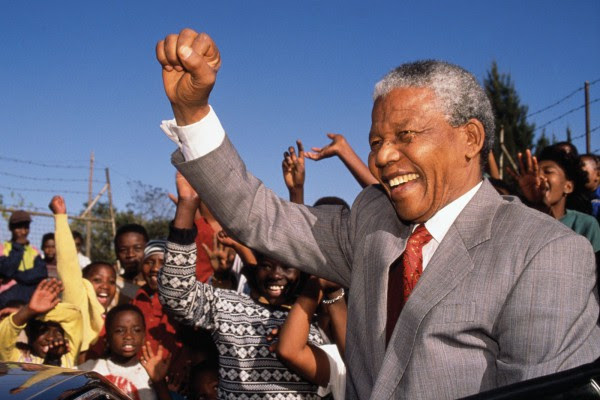 “What counts in life is not the mere fact that we have lived. It is what difference we have made to the lives of others that will determine the significance of the life we lead.” –Nelson Mandela speaking at the 90th birthday celebration of Walter Sisulu, Walter Sisulu Hall, Randburg, Johannesburg, South Africa, 18 May 2002.

Nelson Mandela was never really a prisoner, but a free man always, and now, forever. As a South African, a comrade in the struggle to liberate my homeland from the evil of apartheid and a citizen of the world, my heart is heavy today. The loss was to be expected, but remains hard to bear.

The world has lost a true leader, a true father and a true inspiration. To say he lived a life of significance barely does it justice, and it is not over — he leaves a profound legacy of hope in a world still wracked by injustice and inequity. His inspiration will live on in my heart and in the hearts’ of people everywhere.

My thoughts and prayers are with his family and friends during these hard times. The world has collectively drawn a breath and is mourning. This is a time for reflection and quiet contemplation of a life well lived, for a man well loved.

I was 15 years old when I first heard the name Mandela, or Madiba, as he is fondly known in Africa. In apartheid South Africa he was public enemy number one. Shrouded in secrecy, myth and rumour, the media called him ‘The Black Pimpernel’. He was able to avoid the police, using several disguises — a favorite of which was that of a chauffeur — until the CIA colluded with the apartheid regime to ensure his capture. In Durban, where I was born and grew up, and all over Africa, he was a hero! Now he is a hero to the world.

“Education is the most powerful weapon which you can use to change the world,” he told the University of the Witwatersrand in 2003.

Thinking back to how he shaped my early life as an activist; during the apartheid regime I first stood up to in protest against inequality in education — I fought apartheid education — I remember when my friends and I first heard of the “Free Mandela” campaign. Madiba, as we fondly refer to him, was censored from the media. Such was the official fear the state held for his ideas. From then on, Madiba became a major source of inspiration for me, and when he said, “the struggle is my life,” I realised how powerful and true his words really were. Those words inspired many of my fellow activists fighting the brutality of the apartheid regime. For me too, like many of my former comrades, it has become my life, a joyous life, but sometimes a hard life.

I have had the privilege to meet Madiba several times, and for that I consider myself extremely lucky. I first met him when I was in my late 20s, in 1993. I was helping facilitate an African National Congress (ANC) workshop to plan its media strategy. For someone who is rarely lost for words, I was choked, I was humbled, I could barely utter a sentence when Madiba shook my hand: “It’s an honour to meet you, Madiba” — and I couldn’t get a word out after that. He was an enormous presence, yet remained simple, without pretension. After lunch he asked the manager of the hotel we were meeting in if he could thank the workers who provided the food. He went to the kitchen and greeted each and everyone. I followed and saw him shake everyone’s hands — a simple honest gesture of appreciation that meant so much to all of them.

In 1995 I met him again when I was heading the Adult Literacy Campaign in South Africa. On International Literacy Day I took kids and adult learners to the Parliament to meet Madiba. They were excited to have their picture taken with him — the image was to become a poster for our campaign to promote adult basic education — but everyone was anxious; they where asking me what they should say and how they should approach meeting the President! Taking no chances most had prepared sentences, planning to thank him for making the time to see us. But when Madiba emerged from his Cabinet meeting he turned the tables. He walked in and thanked everyone for taking the time to see him. “I know how busy you all are and I thank you for taking time to meet me,” he said. In that moment he closed the gap. He was just a human being, a person like them, and everyone relaxed.

He was larger than life but never lost sight of his humanity and ‘ordinariness’. His tenacity, resolution and willingness to forgive were superhuman and have given me strength and taught me important lessons about determination and perseverance.

Madiba once said that the struggle for justice is not a popularity contest. The truth is not always popular, and his example helped me and thousands of others become more resilient. Madiba believed that injustice will carry on unless decent men and women say, “enough is enough and no more.”

“I have fought against white domination and I have fought against black domination. I have cherished the ideal of a democratic and free society in which all persons will live together in harmony with equal opportunities. It is an ideal which I hope to live for and to see realised. But my Lord, if needs be, it is an ideal for which I am prepared to die.” — Defence statement during the Rivonia Trial, 1964

There will be a little more colour and joy in heaven today, he will be there in one of his ‘trademark’ shirts, still burning with the passion and wisdom that was forged in the furnace of injustice and adversity and honed in victory. He will be looking down on us — people everywhere, willing us to go on, knowing that the impossible is possible if we stay true to ourselves.

Rest in peace Madiba, with our never-ending gratitude, you have more than earned it! Hamba Kahle (Go well/Rest in Peace), Madiba. Ngiyabonga kakhulu (thank you very much).