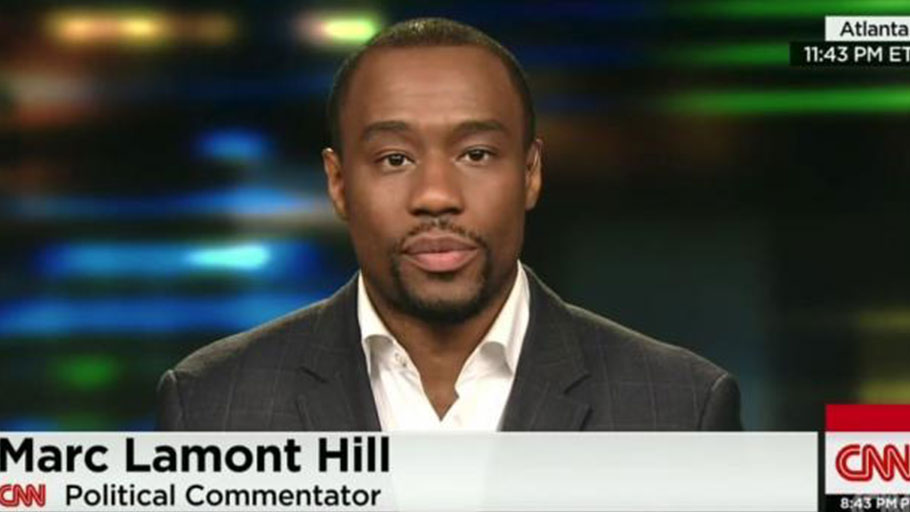 In U.S. Media, Israel Is Untouchable

You Are Here: Home » Blog » Commentaries/Opinions » In U.S. Media, Israel Is Untouchable

You can attack the Palestinians in America uninterrupted, call to expel them and deny their existence. Just don’t dare say a bad word about Israel, the holy of holies.

Marc Lamont Hill is an American writer and lecturer in communications at Temple University in Philadelphia, and also an analyst with CNN. In a speech last week at a United Nations conference he called for “international action that will give us what justice requires and that is a free Palestine from the river to the sea.”

In a matter of hours, the skies collapsed into well-orchestrated hysteria. Seth Mandel, editor of the Washington Examiner, accused Hill of having called for Jewish genocide; Ben Shapiro, an analyst on Fox News, called it an anti-Semitic speech; Consul Dani Dayan tweeted that Hill’s remarks were like a “swastika painted in red,” the Anti-Defamation League said they were tantamount to calling for Israel to be wiped off the map. The inevitable outcome was not long in coming and CNN fired the rebel analyst on the very same day.

How dare he? What was he thinking? Where did he think he’s living, in a democracy with free speech or a country where dialogue about Israel is under the serious censorship of the Jewish establishment and Israeli propaganda? Hill tried to claim that he’s opposed to racism and anti-Semitism and his remarks were intended to support the establishment of a binational, secular and democratic state. But he didn’t stand a chance.

In the heavy-handed reality that has seized control over dialogue in the United States, there’s no room for expressions that may offend the Israeli occupation. On a liberal day it’s permissible to say “two states” as long as you do it in a whisper.

What would have happened if Hill had called for the establishment of a Jewish state between the Jordan and the sea? He would have safely continued holding down his job. Rick Santorum, the former senator, said in 2012 that “no Palestinian” lives in the West Bank. Nobody thought of firing him. Even Hill’s critic, Shapiro, has called in the past for ethnic cleansing of Palestinians in the territories (he backtracked on it a few years later) and nothing happened to him.

You can attack the Palestinians in America uninterrupted, call to expel them and deny their existence. Only don’t dare to touch Israel, the holy of holies, the country that exists above suspicion. And the height of chutzpah? Israel and the Jewish establishment keep on accusing the media, including CNN, of being slanderers of Israel. There’s no worse joke than that. Try to publish a critical article about Israel in a mainstream newspaper in the West – it’s getting more and more difficult, more often than not, impossible. But nothing will satisfy the lion’s hunger: The more he complains, the stronger he gets.

The key word of course is anti-Semitism. A lot has been written about the use Israel and its supporters make of anti-Semitism. And it works wondrously, it’s a magic word that silences people. There has not yet been a single critique of occupation that isn’t tagged as anti-Semitism. Everything is anti-Semitism: Hill is anti-Semitic because he favors a one-state solution, Roger Waters is an anti-Semite because that’s how Gilad Erdan described him at a conference last week about propaganda in Germany, UNRWA is anti-Semitic, and of course, BDS. The whole world is against us.

Marc Lamont Hill speaks at the U.N. in honor of International Day of Solidarity
with the Palestinian People, November 28, 2018. – דלג

Last week there was a lot of fuss over a world survey of anti-Semitism conducted by CNN. It turns out that the Jews are not as hated as Israel would like: Only 10 percent said they had any negative feelings about them. Nearly four times as many people said they don’t like Muslims. Along with its worrisome aspects, the survey points up more than a few truths you can’t deny. Twenty-eight percent of those questioned said that anti-Semitism in their countries is a result of Israeli policy. A third believe that Israel takes advantage of the Holocaust to advance its positions. One in five thought the Jews have too much influence in the media.

Fire more analysts who dare to criticize Israel or suggest just solutions to the occupation – and more people surveyed will say what everyone knows: The Jews and Israel have an incredible degree of influence in Western media. Now you can call me an anti-Semite, as well.

Writer Gideon Levy is a Haaretz columnist and a member of the newspaper’s editorial board. Levy joined Haaretz in 1982, and spent four years as the newspaper’s deputy editor. He is the author of the weekly Twilight Zone feature, which covers the Israeli occupation in the West Bank and Gaza over the last 25 years, as well as the writer of political editorials for the newspaper.

Levy was the recipient of the Euro-Med Journalist Prize for 2008; the Leipzig Freedom Prize in 2001; the Israeli Journalists’ Union Prize in 1997; and The Association of Human Rights in Israel Award for 1996. (Haaretz)