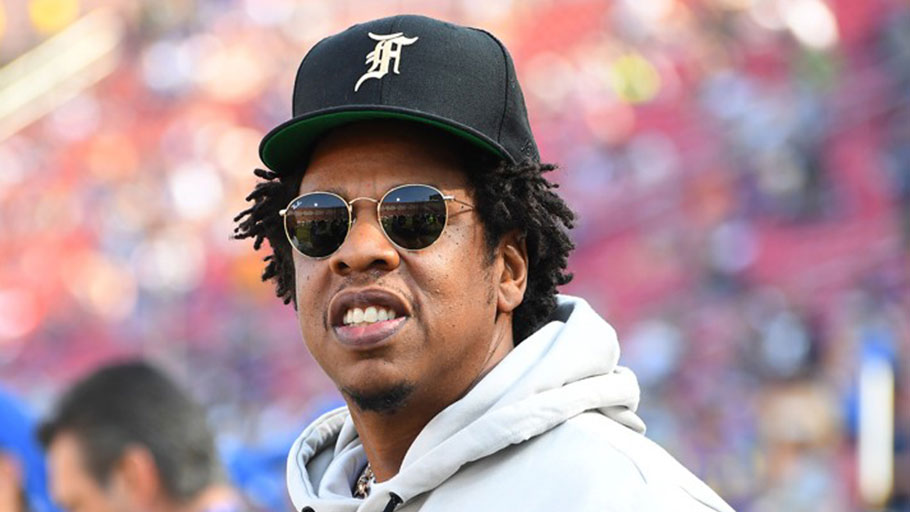 The former quarterback caused a problem for the league—which turned to the celebrated rapper for assistance.

By Jamele Hill, The Atlantic —

The hip-hop mogul Jay-Z and National Football League Commissioner Roger Goodell held a joint media session at the Roc Nation offices in New York to seal a once-implausible partnership that isn’t being received as positively as both parties probably hoped.

I assume neither Goodell nor Jay-Z expected to be on the defensive once the NFL announced that it would give Roc Nation, the music mogul’s entertainment company, significant power in choosing the performers for the league’s signature events—including the coveted Super Bowl halftime show. Jay-Z and Roc Nation will also help augment the NFL’s social-justice initiatives by developing content and spaces where players can speak about the issues that concern them.

This wasn’t just another routine example of Jay-Z living out a lyric he’d rapped nearly 15 years ago—“I’m not a businessman. I’m a business, man!” Instead, the rapper faced questions yesterday about why he chose to collaborate with the same league that he’d publicly criticized for its treatment of Colin Kaepernick, the quarterback who hasn’t had an NFL job since taking a knee during the national anthem three years ago to protest police brutality and racial injustice. This is the same Jay-Z who showed support for Kaepernick by wearing his jersey on Saturday Night Live. On his megahit song “Apeshit,” Jay-Z rapped this lyric: “Once I said no to the Super Bowl: You need me, I don’t need you. Every night we in the end zone. Tell the NFL we in stadiums too.”

Now he’s in business with the league.

Kaepernick’s girlfriend, Nessa Diab, wrote on Twitter that Kaepernick didn’t speak with Jay-Z before he brokered his deal with the NFL. Jay-Z said yesterday that he spoke to Kaepernick on Monday, but he wouldn’t divulge how their conversation went.

A source close to Kaepernick, speaking on the condition of anonymity because of the sensitivity of the topic, told me, “It was not a good conversation.”

But it was all smiles yesterday between Jay-Z and Goodell.

The financial arrangements have not been made public. But whatever the numbers, the NFL’s new partnership with Jay-Z is a huge win for the league. Some of the biggest celebrities in the world have voiced their support of Kaepernick, saying they would boycott the NFL until Kaepernick is back in the league.

Now that the NFL has Jay-Z’s blessing, it’s conceivable that some of those entertainers who distanced themselves from the NFL might change their mind. Jay-Z has given the NFL exactly what it wanted: guilt-free access to black audiences, culture, entertainers, and influencers.

NFL officials must have been bothered by how much Kaepernick was discussed during Super Bowl week earlier this year. Not only did Goodell have to answer more questions about why Kaepernick still isn’t receiving any interest from NFL teams, but there had also been a number of reports that the league was having a hard time finding performers for its halftime show. Some stars, including Rihanna and Cardi B, reportedly turned down the opportunity to appear at the event show out of allegiance to Kaepernick. Other celebrities, such as the comedian Amy Schumer, publicly pressured the Maroon 5 singer Adam Levine to pull out of his performance. The Reverend Al Sharpton, the civil-rights leader, blasted the rapper Travis Scott, who performed with Levine. “You can’t fight against Jim Crow and then go sit in the back of the bus,” Sharpton told TMZ.

Clearly Jay-Z’s support of Kaepernick only went so far. Regardless, why would Jay-Z waste any of his enormous social and cultural capital on the NFL when he doesn’t need the league’s platform, money, resources, or validation?

I get that Jay-Z might see this as an opportunity for artists to connect with the NFL’s immense audience. He could also offer some incredible insight and direction to the league on the social-justice front, since he’s been actively engaged in such work for a long time. I also understand that, to become hip-hop’s first billionaire, Jay-Z didn’t always have the luxury of avoiding relationships and partnerships with people he disagreed with or disliked.

But in this case, Jay-Z isn’t getting enough out of the deal to justify the sacrifice of some of his credibility. This alliance plays right into the NFL’s hands, because the league seems determined to banish any memory of Kaepernick with its recent social-justice efforts—even though it’s likely that Jay-Z and the NFL wouldn’t even be entering into this arrangement if Kaepernick hadn’t taken a knee in 2016.

It’s easy to see why Kaepernick would be upset now. The partnership with Jay-Z is part of the NFL’s larger strategy to continue to absolve itself of what happened to the quarterback and throw enough money at social-justice causes so that the players will no longer feel the need to protest—or, at the very least, keep their opinions about racial injustice far away from the football field. Last year The New York Times obtained audio of the three-hour meeting that took place among owners, players, and executives in October 2017, during the pinnacle of the protest drama. The late Houston Texans owner Bob McNair told the players who were present at the meeting, “You fellas need to ask your compadres, ‘Fellas, stop that other business. Let’s go out and do something that really produces positive results, and we’ll help you.’”

By leaving Kaepernick completely out of the mix, Jay-Z is now complicit in helping the NFL execute its strategy. Now he is an accomplice in the league’s hypocrisy.

“I think that we forget that Colin’s whole thing was to bring attention to social injustice, correct?” Jay-Z said during the press conference. “So, in that case, this is a success; this is the next thing. ’Cause there’s two parts of protesting. You go outside and you protest, and then the company or the individual says, ‘I hear you. What do we do next?’ So, for me, it was like, action, actionable item, what are we going to do with it? Everyone heard and we hear what you’re saying, and everybody knows I agree with what you’re saying. So what are we going to do? So we should, millions of millions of people, and all we get stuck on [is] Colin not having a job. I think we’re past kneeling. I think it’s time for action.”

It doesn’t matter whom the NFL partners with, or how much money it pours into social-justice causes. The league’s actions come off as disingenuous because Kaepernick remains unemployed as a result of a peaceful protest. How can the NFL be taken seriously as a social-justice champion when it blackballed a player who stood up for equality?

I don’t question Jay-Z’s commitment to social justice or his desire to empower African Americans. He has consistently used his platform to have critical conversations and bring awareness to the inequalities and injustices that black people regularly face. Jay-Z brilliantly put into perspective how the war on drugs disproportionately hurt blacks and Latinos. He executive-produced a riveting six-part documentary series on the slain teen Trayvon Martin that aired on BET last summer. He also produced a miniseries on Kalief Browder, who was falsely imprisoned at New York’s Rikers Island for three years, starting when he was 16 years old, for allegedly stealing a backpack. Browder died by suicide a year after he was released. Jay-Z’s foundation has funded countless initiatives related to education and professional development. He has also donated millions to so many causes that he is one of the most important humanitarians in the world.

I don’t believe Jay-Z is a sellout, because his track record proves otherwise. But it does seem like he’s being used as cover. Or, at best, a buffer. The league can point to its partnership with Jay-Z whenever anyone brings up the fact that several of its owners are Trump supporters. As Kaepernick’s best friend, the Carolina Panthers safety Eric Reid, pointed out on Twitter, the announcement of this partnership helped move the news cycle past last week’s controversy involving the Miami Dolphins owner Stephen Ross.

The Miami wide receiver Kenny Stills criticized Ross for holding a fundraiser for Trump last week. Stills, who continued to kneel during the national anthem last season, called out Ross for hypocrisy. The Dolphins owner also serves as a co-founder of RISE (the Ross Initiative for Sports and Equality), whose mission is to create leadership programs and workshops to address racism, inequality, and prejudice—which Trump keeps making worse. As evidenced by Ross and the New England Patriots owner Robert Kraft, NFL owners are quite comfortable playing Robin Hood in one world and Gordon Gekko in another.

Fortunately for Ross and other owners, Jay-Z gave the NFL what it wanted—a blank slate. Jay-Z is an iconic figure, and it would be a shame if this partnership changed how people think of him. But I have also learned this about the NFL: Football is the NFL’s primary business, but chess is the game it plays best.

Jamele Hill is a staff writer for The Atlantic, where she covers sports, race, politics, and culture.