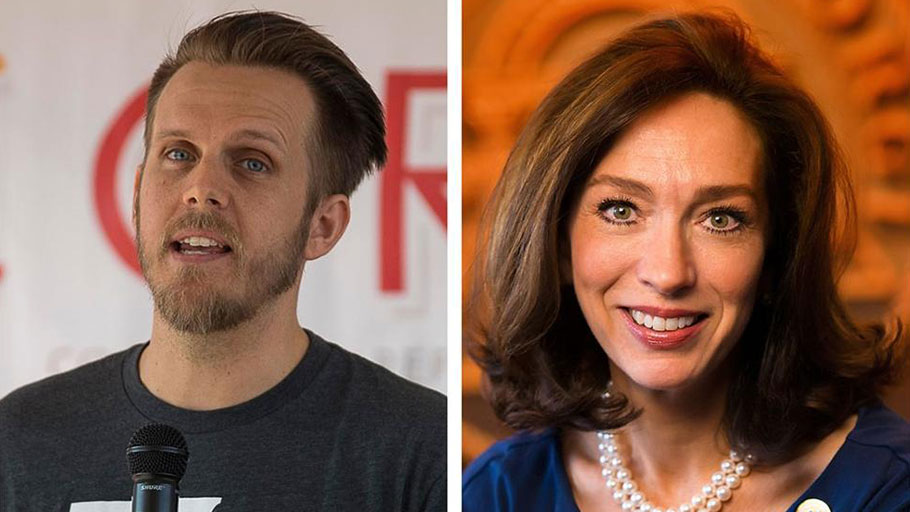 By Tamar Hallerman, The Atlanta Journal-Constitution —

Two of the top Democrats seeking Georgia’s U.S. Senate seat in 2020 are embracing a proposal to examine reparations for the descendants of slaves, a concept senior members of the party shied away from in previous elections.

Former Columbus Mayor Teresa Tomlinson and Clarkston Mayor Ted Terry have both voiced support for HR 40, a U.S. House bill that would create a commission to study the effects of slavery, Jim Crow and other forms of codified discrimination on African Americans.

Named for the post-Civil War promise to give former slaves 40 acres of land and a mule, the legislation would also grant the commission authority to recommend potential forms of compensation, including payments to the descendants of slaves and other forms of economic assistance such as zero-interest loans and development grants to black communities.

“It’s the first step toward looking at the true impact of slavery and our history,” Terry said.

The concept of reparations has been floated for decades, but Congress has never studied it. The proposition picked up steam following the Black Lives Matter movement and the publication of an influential essay by Ta-Nehisi Coates in 2014.

Several Democratic presidential hopefuls have championed the bill, as have House Democratic leaders, who have promised a floor vote in the months ahead. Four out of five of the state’s Democratic congressmen have also signed on as co-sponsors.

Their support represents a sea change from even a few years ago, when some senior Democrats, including President Barack Obama, rejected the concept of cash reparations for being insufficiently narrow. Others worried it could alienate voters.

In last year’s gubernatorial race, Democrat Stacey Abrams steered clear of the issue. Instead, she focused on proposals related to voting rights, education access and others that she said would help communities of color “overcome structural barriers to opportunity.”

Abrams ended up endorsing reparations for African Americans and Native Americans earlier this year in an interview with The Root.

As to what form the reparations would take, that remains a tougher question.

Abrams said she didn’t “know enough to know what the answer is,” an answer that was echoed by Terry and Tomlinson. The latter, however, said she opposed the distribution of cash “because, frankly, those entitled would be leaving money on the table.”

“People are talking on a much broader scale than cash reparations,” she said in a recent interview.

As they’ve sought to win over African American voters  who are a dominant force in  the Democratic Party, both Tomlinson and Terry have touted their support for policies they believe will help level the legal and economic playing field between black and white people. That includes refreshing the Voting Rights Act, overhauling the criminal justice system and expanding health care access.

Terry said there’s also “a strong case to be made about reparations in the housing industry” due to “redlining,” a federal policy dating back to the 1930s that reinforced neighborhood segregation and continues to shape cities today.

Republicans inside and outside of Georgia have largely avoided the reparations debate, including incumbent U.S. Sen. David Perdue.

Some privately say such plans are misguided and unworkable, pointing to a recent Gallup poll that found that 67% of Americans were opposed to the government making cash payments to African American descendants of slaves, including 47% of Democrats. (The survey did not poll other proposals such as zero-interest loans or federal grants to black communities, and the same survey found that 73% of African Americans were in favor of cash payments.)

“The bill has a lot of issues,” said U.S. Rep. Doug Collins of Gainesville of H.R. 40. He’s the top Republican on the House Judiciary Committee, which has jurisdiction over the legislation.

The GOP has hammered Democratic candidates this election cycle for drifting to the left and embracing what they say are socialist policies, and some officials have suggested that reparations could be folded into the same debate.

If Terry and Tomlinson “try to continue to move further left in Georgia, they’re going to find out the same thing Stacey Abrams and others found, which is that Georgia is still basically a center-right state and not a far-left state,” Collins said of the Senate race.

Even if the reparations proposal passes the lower chamber, it’s unlikely to get a vote in the Senate.

“I don’t think reparations for something that happened 150 years ago for whom none of us currently living are responsible is a good idea,” Majority Leader Mitch McConnell told reporters in June.

“We’ve tried to deal with our original sin of slavery by fighting a civil war, by passing landmark civil rights legislation. We’ve elected an African American president. I think we’re always a work in progress in this country, but no one currently alive was responsible for that,” he said.