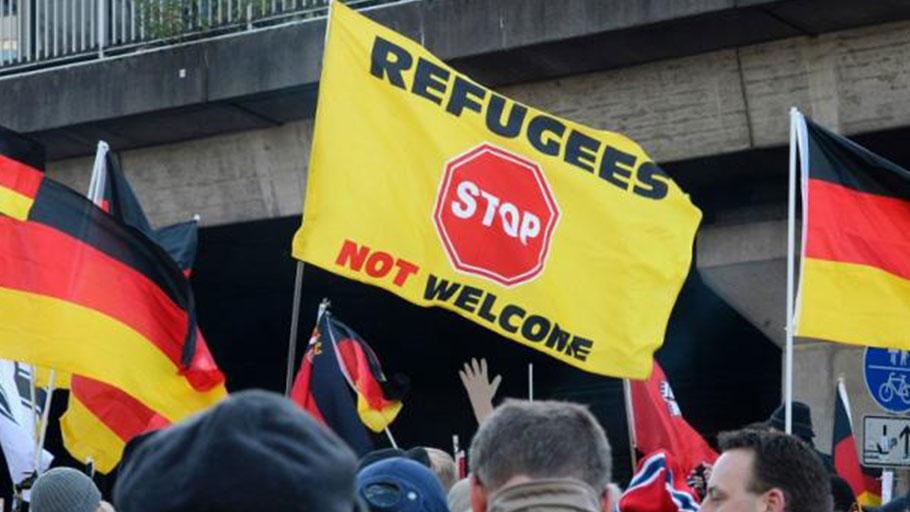 The wise priest Laocoön, old legends say, vainly warned against the famous “Trojan horse”. A hostile god sent giant serpents which strangled him and the big wooden present was opened. The soldiers hidden inside opened Troy’s gates so the Greek battalions could rush in, kill the men, enslave the women and destroy the city. Its ruins are still being uncovered.

In Germany it is worth remembering Laocoön, especially in its eastern states of Saxony, Brandenburg, and Thuringia. Within weeks they face not a wooden horse but the steely AfD, the Alternative for Germany. And warnings are in order!

This party, polling 13% in all Germany – worrisome enough – is vying for top ranking in opinion polls in three East German states now facing elections. In Saxony it is tied in first place at 26%; it is tied for first place in Brandenburg at 19%. Both states vote on September 1st. Thuringia votes on October 27th where, at 24%, it lacks only one point for first place.

Luckily, even if it comes out first, it cannot form state governments. For that, a 50% majority of parliamentary seats is necessary and any coalition with the AfD is still strictly taboo. But that pariah status is weakening; there is subdued muttering among Christian Democrats (CDU): “Maybe, if no other choice seems available, under some circumstances, well, aren’t AfD legislators also elected democratically?” And most of the media generously continue to give AfD leaders manifold opportunity to spout their vicious “Hate Foreigners” propaganda!

Some AfD leaders and spokesmen, like nose-tip-bespectacled old Prof. Alexander Gauland, 78, and jolly, friendly Jörg Meuthen, 58, may seem almost harmless or reasonable – until they hit out at “those Muslims” who are endangering the purity of German blood and culture – or killing Germans.

In an awful incident a week ago a mentally unstable man of Eritrean descent pushed a woman and her son under a train in Frankfurt. The boy died. Such horrors are grist for the AfD, which had fully ignored the shooting of an Eritrean only days earlier by a German, at random from his car window – perhaps the trigger for the later tragedy, committed by a man who was not in the refugee wave welcomed by Merkel in 2015 but had arrived years earlier, in Switzerland, not Germany. Yet one of the 91 AfD deputies in the Bundestag was quick with blame: “Angela Merkel, I curse the day you were born!”

AfD boss Jörg Meuthen, asked in a TV interview if this was a proper reaction, smiled tolerantly: “I can understand it a bit if people react highly emotionally and perhaps then choose the wrong words.”

Asked about the demand by a state AfD leader for “a revolt by the generals,” Meuthen again smiled amusedly and said that was no call for violence, merely a criticism at the naming of a new, militarily inexperienced woman as Defense Minister. His associate, he said, “was the very last man who would ever incite a revolution.”

A far less smiling face is now gaining increasing notoriety. Bjorn Höcke, 47, the AfD leader in Thuringia, made his views all too clear when, referring to the Holocaust Memorial in Berlin, he said: “Our people, the Germans, are the only people in the world who have planted a monument of shame in the heart of their capital… We need a 180 degree turnaround in our political memorializing“.

Stoking up the emotions of his far-right audiences, Höcke attacks all Muslims, all “non-Europeans”: “Panicked nightmares are increasing in our land, especially unfortunately among blonde women! And this in our own country. It is insufferable!” He wants all Muslims to be forced out, violently if necessary, beyond the Dardanelles to Asia, to Africa. “Thuringians! Germans! Three thousand years of Europe! A thousand years of Germany! I will not give them up; you will not give them up!”

He demands a “renovation” of Germany to be achieved by a “people’s opposition” on three fronts: strengthening the AfD in the federal and state parliaments, joining in the streets with motley rabble-rousers like PEGIDA, who marched regularly in Dresden against the “Islamification of Europe” and with violent gangs of thugs like those which attacked immigrants in Chemnitz last year and, thirdly, with rebellious elements within the armed forces, police and judicial apparatus.

Speaking to a thousand-strong, mostly male crowd at the Kyffhäuser Meet, named after a nationalist pilgrimage site, Höcke used the same analogy as Nazi-boss Goebbels eighty years earlier: “The question today is; either ‘sheep or wolf’. And here, my dear friends, I believe we decide on ‘wolf’. The time of the wolf has arrived, which means that if opponents hinder an AfD rally the police will be given five minutes to intervene – but then 1000 patriots should assemble in back of the opposing demonstrators.” Höcke called on the federal police not to obey their superiors or else they would be called to accounts after “the people” take over. Then “German unconditionality will guarantee that matters will be dealt with fully and consistently… When the changeover has finally achieved we Germans won’t go for half-way measures.“ The message was all too clear and icily reminiscent.

Such tones are especially disturbing from the mouth of a leader now far more important than only in Thuringia. At a highpoint of the meeting the thousand-strong audience cheered a video praising him and shouted as he entered, accompanied by heroic music with flags and banners waving. One admirer was quoted: “You are our leader, we are fully willing to follow you!”

As if to confirm Höcke’s demands, the police watched passively, finally stepping in reluctantly when the AfD mob turned to physical attacks against a small number of journalists standing outside the meeting site which they had been forbidden to enter. One camera was broken.

The Kyffhäuser Meet, now an annual event in an ancient, renovated castle, a possible future AfD training and rallying center, was organized by an even farther right grouping of the already so far right AfD. It calls itself the Flügel – or “Wing”. Though opposed by some less violently-inclined AfD members, and occasionally disparaged by friendly, seemingly “moderate” leaders like Gauland and Meuthen, they both were happily present at the meet. Despite occasional mild disapproval, they have always stood up for extremist Flügel people like Höcke when the chips were down.

The entire party is united in vicious opposition to gay rights. Höcke, who idealizes the “three child family“, opposes the “early sexualizing of children in the schools“ and the “unnatural equalizing“ of the sexes, wanting rather to ”cultivate the polarity of the sexes“ based on “the spirit of defense, the wisdom and leadership“ of men and the “intuition, gentleness and devotion” of women.

Höcke has spouted nastiness against Africans, whose difference from “us Europeans”, he warns, is especially menacing because they are genetically keyed to having more children. The AfD, under the influence of the Höcke-Flügel, has shaken hands not only with PEGIDA and other local, almost openly pro-Nazi groups and grouplets, but is strengthening ties with the equivalent party in Austria, the FPÖ, and Marina Le Pen’s rightist party in France. And though the AfD has rejected the loud anti-Russian media campaign now echoing that in the USA, it fully supports a mightier military build-up than ever.

At the same time, embarrassingly for some, it tried to take the lead in drastically repressing any support for the Palestinian-launched Boycott, Divestment and Sanctions (BDS) movement, thus supporting the Netanyahu campaign and its similar Islamophobia. The Bundestag majority rejected the AfD move but then passed a similar resolution of its own.

The reasons for its strength in eastern Germany are all too clear. The disillusionment of so many with German unification and all the false hopes connected with it, the anger that even after thirty years they are discriminated, second-grade citizens, taken over by the “Wessies”, with fewer jobs, little security and worrisome prospects for themselves and their children, the feeling, nourished by the media, that refugees and immigrants are getting better treatment than they are, have all led to the rapid growth of the AfD, with its proclaimed social demands. This is paired with the failure of the LINKE (Left) to turn this disappointment into active struggle against the political “establishment” if not the system.

The beautiful but disturbed city of Dresden, Saxony’s capital, has become the center of this rightward turn, with Höcke proclaiming last May, then too to an audience of a thousand, that it had become “the capital of justified resistance“. A victory in the September election would re-enforce this claim.

There is always resistance – often strong – to the AfD and to all fascists. On August 24th, a week before the vote, people from all over Germany will go by train, bus and car to Dresden to back up antifascists there in a final appeal against a vote for the AfD. Such rallies have had their effects in the past; at that late date it would be surprising if they can make a big dent – but who knows?

While thousands of anti-fascist Germans prepare to add their voices and presence in Dresden, a small group has been standing day for day in quiet protest in front of police headquarters in far less fascist-friendly Berlin. For years, in a neighborhood in an East Berlin borough, well-organized Nazis have been smearing swastikas and slogans on walls, sending death threats and burning cars in a campaign of terror which somehow eluded any action by the police, who were never able to find the culprits, although several bars in the area are notorious as centers of far-right activity.

Now one police agent was seen in friendly conversation with three known fascists in such a bar before he drove away with one of them in his private car. All queries about this sighting met a stone wall, and no charges have been made. Hence the protests. Even though Berlin’s minister in charge of police and security is a Social Democrat it is now undeniably clear that some in this apparatus incline heavily rightward. Indeed, recent years have repeatedly turned up evidence of such sympathies – and connivance, in many regions and even high levels. Björn Höcke’s hopes in this direction were by no means so fanciful.

The Berlin Wall was broken down almost thirty years ago. Before then, we all made sarcastic jokes about its official designation by East German (GDR) party leaders as “anti-fascist protective barrier”. We all knew better why it was erected. But hearing racist ranting by AfD leaders now hoping for victories and watching – or opposing – gangs of marching thugs with barely–paraphrased Nazi slogans, from East Berlin to southern Saxony, we must wonder if perhaps that scorned terminology also contained just a bit of truth.

And we must hope that the increasing omens of a new-old menace are not treated the same way as those of unfortunate Laocoön in unfortunate Troy!

Victor Grossman (born in New York City, 1928) is an American journalist who deserted the US Army in 1952 under McCarthy-era pressure by swimming across the Danube River to the Soviet Zone of Austria. He has lived in East Berlin ever since. A Socialist Defector: From Harvard to Karl-Marx-Alleewas just published by Monthly Review Press.  His other books include a history in German of the Spanish Civil War, Madrid du Wunderbare, and his English-language autobiography, Crossing the River (University of Massachusetts Press).