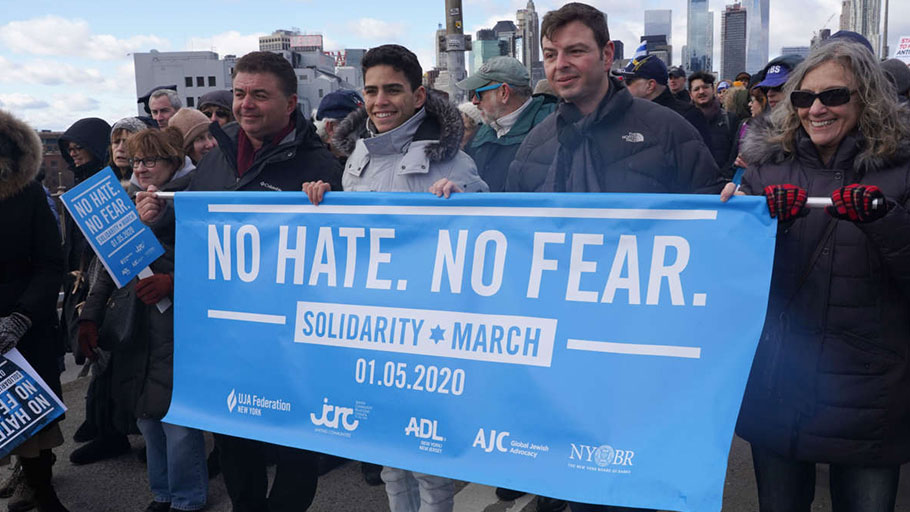 As Jews, We Must Reject White Supremacy’s Efforts to Pit Us Against Other Groups

You Are Here: Home » Blog » Commentaries/Opinions » As Jews, We Must Reject White Supremacy’s Efforts to Pit Us Against Other Groups

Amid fear and mourning, many Jewish groups are turning toward anti-racist solidarity to create real safety.

I was proud to march against anti-Semitism with tens of thousands of New Yorkers on Sunday in the wake of the heartbreaking attacks on Orthodox Jewish communities from Monsey to Jersey City to Brooklyn. While Sunday’s march displayed powerful unity in our rejection of anti-Semitism, it also underscored a central tension in our Jewish communities: Are we fighting for justice, or just us?

For too long, Jewish communal institutions have adopted a “just us” approach. The Anti-Defamation League and the United Jewish Appeal-Federation of New York, two of the central organizers of Sunday’s march, have long documented histories of demonizing Muslim and Palestinian communities and supporting policing initiatives that have devasting impacts on communities of color, including Jews of color.

It is unacceptable for institutions that claim to represent our communities to act upon the belief that Jewish safety, protection and well-being can come at the expense of our Black, Palestinian and Muslim neighbors. On Sunday, these establishment organizations did not break from their shameful track record. In some cases, they chose to double down on division, at precisely the moment when we need to protect and defend other vulnerable communities.

There were certainly those in the crowd who echoed the divisiveness and racism from the stage. However, others made it clear that the fault-lines in our community have shifted dramatically — toward a politics of solidarity and collective liberation.

Beyond yesterday’s march, we can see signs of this shift everywhere we look. In a letter to her Kolot Chayeinu Congregation in Brooklyn, Rabbi Miriam Grossman reflected on the powerful experience of lighting a public menorah on the last night of Chanukah while being protected by a ring of South Asian Muslims and other people of color. “I nearly cried,” wrote Rabbi Grossman. “We will protect each other. We are already protecting each other. The path forward is not isolation or fear but solidarity, relationships, and love.”

Hasidic writer and Monsey resident Shimon Rolnitzky echoed this “path forward” in a moving letter to the Jewish Telegraphic Agency: “The natural friends of Orthodox Jews are other minority communities next to whom we live. A large part of the Black, Latino, and Muslim communities, our neighbors, look at us religious Jews as their natural allies against a world of enmity and hate.” Even The New York Times editorial board agrees on the shortsightedness of policing as a response to antisemitic violence: “flooding Brooklyn communities with police officers is not the solution, particularly given the history of overly aggressive policing tactics in minority neighborhoods.”

One thing is clear: Our shared enemy is
white supremacy and our shared solution is one another.

community undergoing a seismic awakening. We will no longer allow our fear, grief or vulnerability to be manipulated into support for increased violence against other communities. We refuse to allow white supremacy to pit us against one another or make us pawns in a system of divide and conquer. Instead of sinking in isolation, we are choosing to rise in solidarity.

Targeted by surveillance programs, police shootings, deportation and mass incarceration, communities of color have long been at the forefront of envisioning real safety. Our Muslim and Palestinian partners, including the indomitable Linda Sarsour, embodied this on New Year’s Eve by organizing a moving “Safety in Solidarity” gathering in Brooklyn immediately following the attack in Monsey. Rep. Alexandria Ocasio-Cortez demonstrated this by marching alongside of us across the Brooklyn Bridge.

As I made my way home from the march on Sunday, exhausted and overwhelmed after the third rally against anti-Semitism in a week, I also had clarity: Defending and protecting each other is not an abstraction or a buzz phrase. It is what we must do with our bodies, our sanctuaries and our traditions, for all communities endangered by the current administration and its authoritarian allies across the globe.

One thing is clear: Our shared enemy is white supremacy and our shared solution is one another.

Jay Saper is a member of Jewish Voice for Peace and lives in Brooklyn, New York.