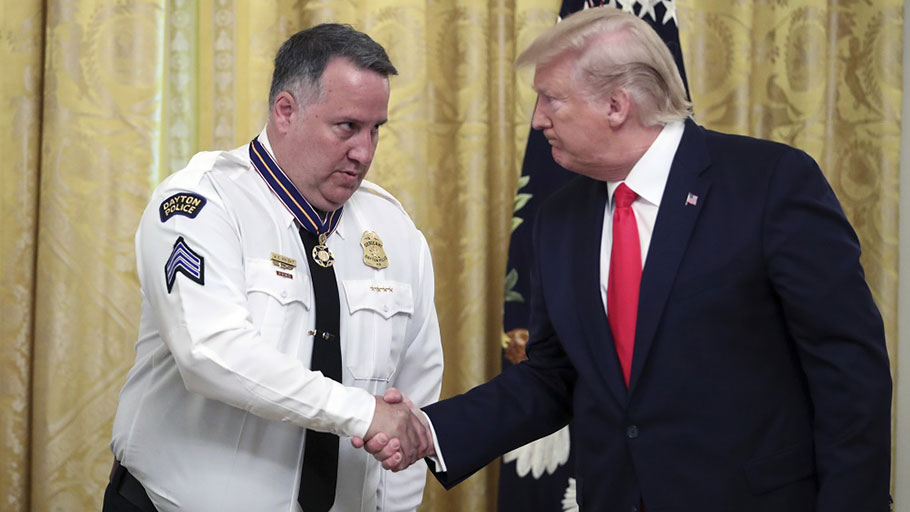 The Law and Order Scam Worked for Nixon, Trump Banks it Will Work for Him Too

You Are Here: Home » Blog » Commentaries/Opinions » The Law and Order Scam Worked for Nixon, Trump Banks it Will Work for Him Too

It started a week or so before the Republican National Convention opened when several major police unions rousingly backed Trump’s reelection bid. The union’s fervor for Trump dominated the convention with loud, long, and emotional reminders from cop groups and other law and order proponents that the thin Blue Line is under attack as never before. The inflamed warning was that America’s police are the last firewall against anarchy, lawlessness, and mob rule.

Vice President Mike Pence in his acceptance speech was blunt: “We will have law and order on the streets of this country.” He solemnly pledged that he and Trump will firmly back “those who stand on the thin blue line.”

In truth, Trump’s law and order pitch to corral a second term is nothing new. It’s the same crass, cynical, and blatant grab at the same ploy he used in 2016. In July that year in a campaign speech he loudly declared that he was the “law and order candidate.” Trump was locked in a dual with Democratic presidential foe Hillary Clinton for the handful of swing states that would decide the White House.

Trump figured that what better way to get the attention and votes of less educated, lower income white rural and blue-collar workers then by conjuring up horrific, nightmare visions of rioters and looters in their neighborhoods. The subtle ingredients of racial hysteria are there again to try and make the pitch stick. There are enraged masses of demonstrators. There are the repeatedly TV looped scenes of buildings and even a police station being torched. There are the demands to defund and, even more terrifying to some, abolish the police. To top it off, there is the same convenient whipping boy movement, Black Lives Matter, that conjure up for many a nihilistic, anti-white, anti-police, lawless group. As in 2016, Trump aims again to make his law and order sell to nervous, fearful voters in the swing states, and right leaning independents. They are the ones Trump again banks on to tip the scales in the crucial swing states in his direction.

He’s got the perfect backdrop to sell his America under siege line from lawbreakers with the scenes of burning buildings in Kenosha, Wisconsin following the police shooting of Jacob Blake. Then he can double down on this with non-stop references to the daily, sometimes violent confrontational demonstrations in Portland. It all fits neatly into the stir up the fears to panic and terrorize his base enough to stampede them to the polls for him. What doesn’t fit and what’s glaringly omitted from Trump and Pence’s law and order harangue is any mention of the murder of two anti-police abuse protesters in Kenosha by avid police and Trump supporter, white teen Kyle Ruttenhouse.

A half century earlier the law and order ploy worked for Nixon. He made the slogan law and order and crime in the streets his signature themes. He was brutal and direct in one speech when he flatly said that the “solution to the crime problem is not the quadrupling of funds for any governmental war on poverty but more convictions.”

Nixon, like Trump now, played hard on the urban riots, antiwar mass marches and riots, and campus takeovers that tore the country in the late 1960s to paint a horrific picture of an America in anarchy. He ridiculed the thought that poverty, racial discrimination, and social inequities were the root cause of crime, violence, and ghetto unrest. His answer was a get tough, crack down on crime.

The crime, of course, that he meant was Black crime, and that meant more police, prisons, tougher and longer sentences, and a full-scale militarization of police departments. Nixon doubled down on this with a thinly disguised Southern Strategy in which he did a hard court of fearful blue-collar whites and, unreconstructed racists in the South.

Trump knew that history in 2016 when he first snatched the page from Nixon’s playbook. And he knows it now. This time the issue he latched onto was the destruction of buildings in several cities and the seeming inability of local police to stop the destruction.

He’s also got another foil. That’s to tar the Biden as a candidate that tilts and panders shamelessly to minorities, particularly Blacks, by allegedly stoking anti-police sentiment, with its kid glove approach to Black Lives Matter, and by relentlessly pushing for more spending on job, health and education programs. The not so subtle hint is that this is all done at the expense of hard working, law abiding, white middle class and blue-collar workers. The polls that show Biden beating Trump handily now could easily change if Trump succeeds in pounding a message that touches the fear and rage of his supporters in the crucial swing states.

Trump will pull out all stops to drive home Nixon’s law and order scam. It worked for Nixon. Trump banks it will do the same for him.

Earl Ofari Hutchinson is an author and political analyst. He is the author Why Black lives Do Matter, (Middle Passage Press) He is an associate editor of New America Media. He is a weekly co-host of the Al Sharpton Show on Radio One. He is the host of the weekly Hutchinson Report on KPFK 90.7 FM Los Angeles and the Pacifica Network.