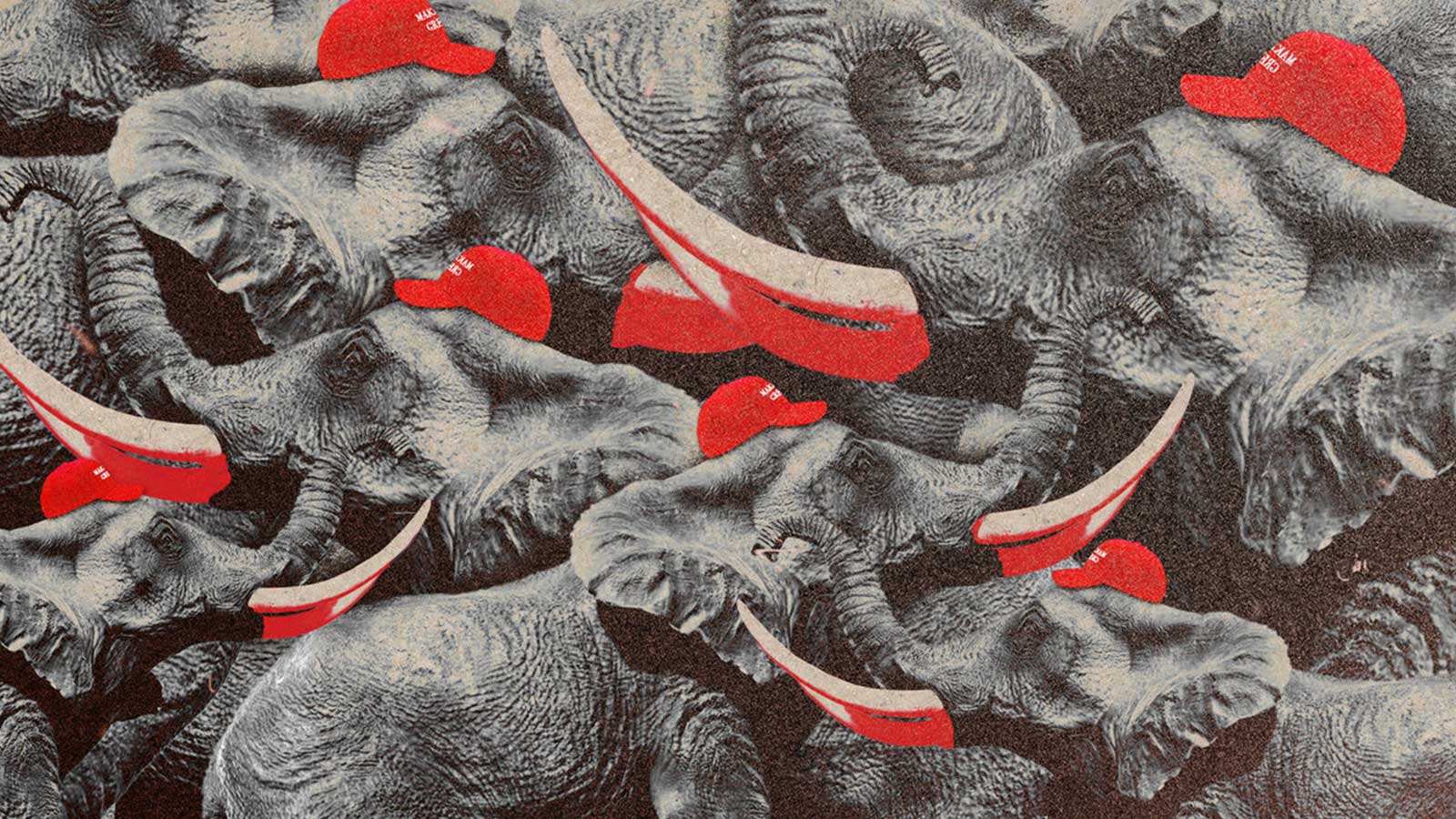 MAGA Is Eating Itself After GOP’s Midterm Disaster

You Are Here: Home » Blog » Commentaries/Opinions » MAGA Is Eating Itself After GOP’s Midterm Disaster

We are starting to see evidence that those on the far right are jockeying for position in a potential post-Trump world.

Now that the last nail is in the midterm coffin with Herschel Walker’s loss in Georgia, it’s time to turn our attention to the looming rumble within the GOP.

The knives were already out, but this could get downright nasty.

The biggest ones are pointed at Donald Trump. He thought his 2016 magic could be replicated by MAGA celebrities across the nation. This experiment failed spectacularly during his own re-election bid and again in the 2022 midterms, but Trump has another problem.

Seven years after he came down the escalator, and six (or so) years since he consolidated the right behind him, a new generation of Republicans has had time to observe Trump’s style—and absorb his lessons. They are younger and increasingly more relevant than Trump. And they’re coming for him.

Some of these people want to replace Trump as the GOP standard-bearer. Others just want to supplant him as the Twitter troll-in-chief. It hardly matters.

The ex-president is also fighting a two-front war against people who no longer fear him. For example, right-wing provocateur Milo Yiannopoulos has claimed he set up the notorious Mar-a-Lago dinner with Kanye and white supremacist Nick Fuentes “to make Trump’s life miserable.”

Of course, DeSantis is Trump’s most direct threat in 2024. DeSantis rode Trump’s coattails to the governorship in 2018, but he has since outflanked him by stealing the anti-“woke” mantle.

To be sure, some Republicans like South Dakota Gov. Kristi Noem and New York Rep. Lee Zeldin are still attempting to diminish Trump’s midterm culpability by blaming leaders like the RNC Chair Ronna McDaniel, while others are blaming GOP Senate leader Mitch McConnell. Still, the trend is clear: While plenty of his party’s own leaders continue to refuse to offer more than timid criticism of him, Trump’s sheen of inevitability is fading.

Think of the GOP as a country, and of Trump as its strongman ruler.

After seizing power, a strongman often (ruthlessly) imposes order and peace at home. For most of the last few years, Trump has been a unifying force in the GOP and, more broadly, on the right (not counting the small percentage of Republicans who became Never Trumpers and were purged).

But what happens when a strongman starts to appear vulnerable? Chaos ensues. People rise up and/or the power vacuum is filled by local warlords.

We are starting to see evidence that those on the far right are jockeying for position in a potential post-Trump world.

Consider the split between bosom buddies Matt Gaetz and Marjorie Taylor Greene over whether to support Kevin McCarthy for Speaker of the House. “Whatever Kevin has promised Marjorie Taylor Greene,” Gaetz said in November, “I guarantee you this: at the first opportunity, he will zap her faster than you can say Jewish space laser.”

Far-right activist Laura Loomer attacked Greene, saying “MTG is a snake and she needs to go. That’s why I call her Marjorie TRAITOR Greene.”

Meanwhile, Greene, who spoke at a Fuentes meeting earlier this year, has condemned him. Then, Fuentes hit back at Greene. Hard. “She wants to be the face of Christian nationalism. She’s divorced, and she’s actively an adulterer,” Fuentes said, presumably referring to disputed reports that she was linked with a tantric sex guru. “How are you going to be the face of Christian nationalism when you’re a divorced woman girlboss?”

But this is far from the only infighting taking place on the far right. Did I mention that Alex Jones is going to war with Kanye and Fuentes by claiming they have a “homoerotic” fixation on Hitler?

Meanwhile, for the truly nerdy among us, there’s trouble on the illiberal right, as the Catholic integralists battle national conservatives.

I’m not saying there wasn’t any right-on-right drama during the Trump years; there was. But what we are seeing now is the result of a nascent power vacuum where players are competing for turf.

And it’s a sure sign that Trump’s shining star is losing its luster.

Think of it this way: If you’re into drama and weird shit, you don’t need Trump any more. There is a younger and (in some cases) weirder crop of right-wingers who are way more interesting than some old guy holed up in a Florida mansion.

What this suggests is that, absent Trump, the GOP won’t revert to sanity. Instead, it will slide deeper into chaos until some clear leader emerges to restore order.

Whether that leader will be benign or corrupt is another fight altogether.