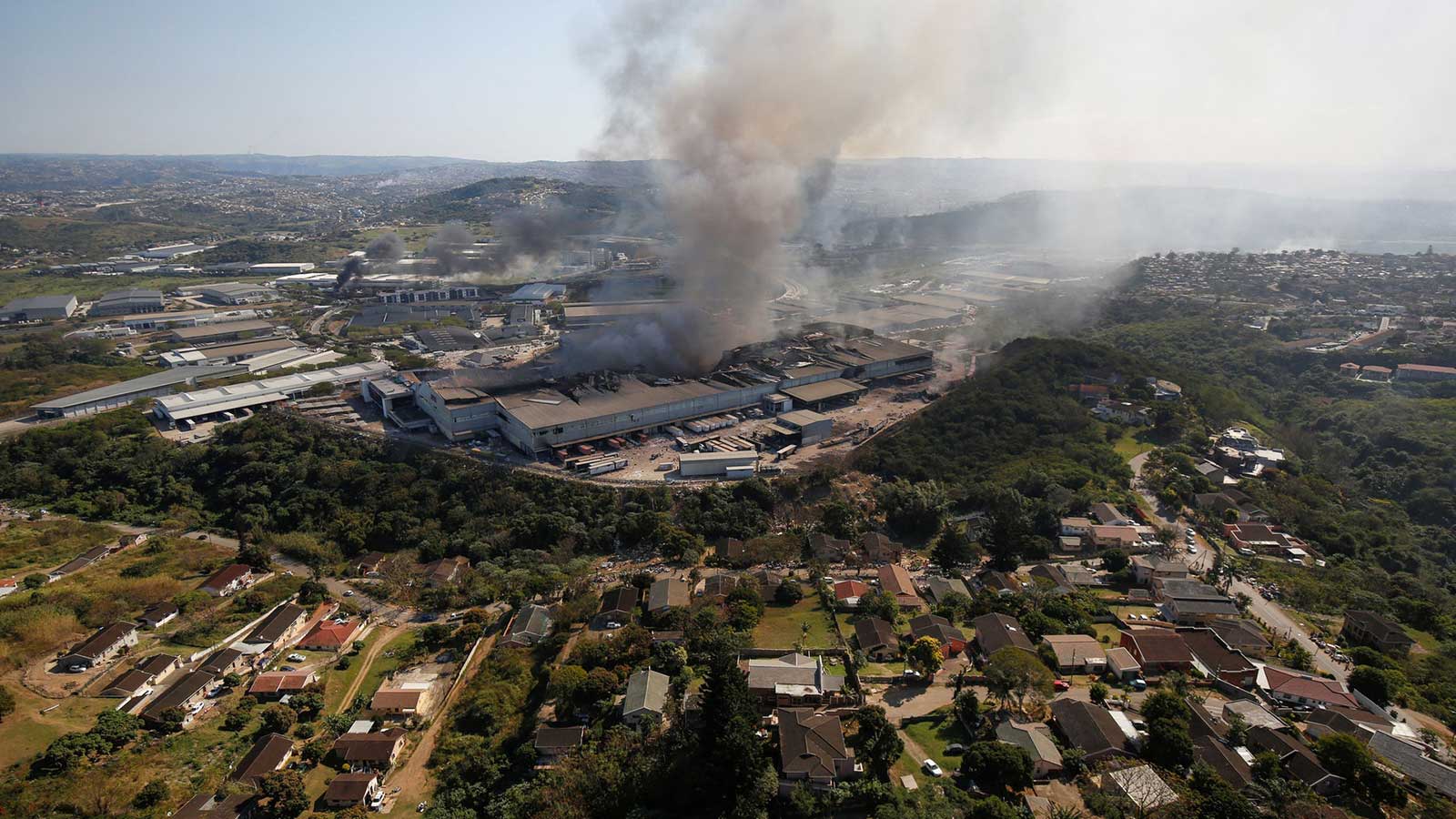 Mandela’s dream for South Africa is in ruins

You Are Here: Home » Blog » Commentaries/Opinions » Mandela’s dream for South Africa is in ruins

Following the imprisonment of Jacob Zuma, and at a time when inequality is worse than during apartheid, mob violence is threatening the country’s constitutional order.

By Robin Wright, The New Yorker —

On June 16, 1976, thousands of Black South African children poured out of their classrooms to peacefully protest the government’s decision to forcibly teach them in Afrikaans, the language of Dutch settlers. As a young foreign correspondent, I covered the chaos as police fired noxious plumes of tear gas and then live bullets at the kids in Soweto, an impoverished Black township outside Johannesburg. The children’s courage, amid poverty and political depravity embedded in national laws, was stunning. Hector Pieterson, who was only twelve, was among the first of some two dozen protesters to die that day. A museum commemorating the uprising is named for him. Barack Obama visited it, with Hector’s sister Antoinette as his guide, in 2006. “If it wasn’t for some of the activities that happened here, I might not be involved in politics and might not be doing what I am doing in the United States,″ Obama said, adding that he had wept when he saw the pictures of the children shot to death, including Hector.

Over the next fourteen years, thousands more died during sporadic waves of unrest that led, in 1990, to the release of Nelson Mandela, arguably the most famous political prisoner of the twentieth century, and eventually to the end of apartheid, one of the century’s most odious ideologies. “I have fought against white domination, and I have fought against Black domination,” Mandela said, on the day of his release, from Cape Town City Hall. “I have cherished the ideal of a democratic and free society in which all persons live together in harmony and with equal opportunities.” June 16th is now a national holiday.

This month, South Africa witnessed the worst violence since the end of the apartheid era. More than three hundred and thirty died over a week of escalating tensions. Forty thousand businesses—including stores, banks, factories, and post offices—were vandalized or burned; damage to the economy was estimated in the billions of dollars. The government eventually had to deploy twenty-five thousand troops to contain the violence in the provinces around Durban, the largest port in sub-Saharan Africa, and then Johannesburg, the financial hub, and Pretoria, the administrative capital. On July 16th, President Cyril Ramaphosa accused instigators of fomenting instability to “weaken, or even dislodge,” the democratic state. “Using the pretext of a political grievance, those behind these acts have sought to provoke a popular insurrection,” he said, after touring the damage in Durban.

The spark was the imprisonment of former President Jacob Zuma, a close Mandela ally during the long slog against apartheid. South Africans often compare Zuma, a charismatic populist who maliciously exploited the country’s political, racial, and ethnic divisions, to Donald Trump. Zuma had a long-standing reputation for political thuggery and corruption. In 2005, he was dismissed as Deputy President in connection with a bribery scandal. He was separately charged the same year with raping the H.I.V.-positive daughter of a family friend. On the stand, he claimed that he had minimized his risk of infection—at a time when South Africa had five million H.I.V. cases—because he had taken a shower afterward. aids activists were horrified. Zuma was acquitted in 2006 and, three years later, was sworn in as President.

After nine years in office, Zuma was forced to resign, in 2018, amid new corruption allegations. An estimated thirty-four billion dollars went “missing” during his tenure, Ramaphosa, his successor, claimed. Under Zuma, “government came to resemble an organised-crime gang,” The Economist noted last week. A commission investigating the allegations summoned Zuma, but he refused to testify and was sentenced to fifteen months for contempt of court. The violence erupted after he reported to prison, on July 7th, and his supporters in the province of KwaZulu-Natal—using social media to mobilize mobs—went on a rampage. “The unrest was orchestrated, instigated, and planned,” Khumbudzo Ntshavheni, a cabinet minister, said. “It almost brought our country to its knees.”The contempt charge is not the last of Zuma’s legal problems—nor the last potential trigger for unrest. The former President is due to appear in court next month to face more than a dozen charges of corruption, fraud, racketeering, and money laundering from an arms deal when he was Deputy President. The separate investigation into his Presidency—the one for which he refused to testify—could produce others.

Zuma is only a symbol of South Africa’s myriad challenges. The country was long viewed as an exception to the poor governance and graft that plagued other parts of the continent—much like the United States long claimed to be an exceptional state, even in the West. Both were illusions. Over the past month, South Africa proved that it is not superior to other African countries, just as Americans have learned, amid our own turbulence, divisions, and failures, that we aren’t politically special, either. Three decades after Mandela was freed, the racial, class, education, and economic divisions spawned by apartheid still define the country. “The Mandela formula—if we can call it that—failed to deal with a series of issues linked to the country’s political economy,” Peter Vale, the Nelson Mandela professor of politics emeritus at Rhodes University, wrote to me, in a tough assessment of his country. “In particular, the century’s long question of white wealth and black poverty: until (and unless) serious efforts are made to address this issue and its attendant features, the pattern of politics will be convulsion followed by impasse, convulsion-impasse, etc.”

South Africa is today among the world’s most unequal countries, the World Bank reported in March. Inequality has only worsened since apartheid formally ended, with the country’s first majority-rule election, in 1994. Black education remains abysmal, while more than seventy per cent of top management leaders in the private sector are white. Unemployment has hit thirty-three per cent—the highest rate in South African history, and one of the highest in the world. Almost two-thirds of those under thirty-five are jobless. Even before the current unrest, the economy was deep into a recession. In a Gallup survey, sixty-five per cent of South Africa’s sixty million people reported that they had struggled to afford food over the previous twelve months. Despite its vast natural resources, from gold and diamonds to titanium and uranium, South Africa still suffers electricity blackouts.

“The fabric of our nation has eroded over the past twenty-two years, since the Mandela government,” Mamphela Ramphele told me. Ramphele was the partner of Steve Biko, the founder of the Black Consciousness Movement who was beaten to death in police custody, in 1977. For her activism, Ramphele was banished to a remote northern area for seven years. After apartheid, she was the first Black woman to be appointed vice-chancellor at the University of Cape Town. In 2000, she became a managing director at the World Bank. In 2013, she formed a new but short-lived political party and considered running for President. She is both distraught about the failures of governance and disgusted with the instigators of the unrest. “Now you can see the nakedness of our being as a nation,” she said. “Our problems have been laid bare.”

The unrest also has roots in party politics, which are still “prisoners of the country’s wretched past,” Vale told me. Mandela’s once-celebrated party, the African National Congress, has degenerated into just another corrupt, fractured, and failing liberation movement. It has split in multiple directions over ideology, class, ethnicity, and personal rivalries, Vale said: “What we are witnessing is the proverbial war for the soul of a liberation movement.” Tensions are particularly high between factions loyal to Zuma, the former President, and Ramaphosa, the current head of state; it will only end with the breakup of Mandela’s party into two, three, or more parties.

“The problem is not just Zuma,” Ramphele said. “It’s the political culture that confuses the government party with the state. The lines are blurred. The leaders of liberation movements in every country, with few exceptions, simply are taking over the state as an instrument of patronage for themselves.”

The tragedy of South Africa is most of all human, which gets lost amid the numbers of deaths, arrests, and destruction. Erica Platter is a writer who has spent much of her life in KwaZulu-Natal. “How desperately sad I feel that our new South Africa has come to this. And how deeply disappointed I am that ‘the rainbow nation’ has faltered,” she wrote me. “Of course, it was a delusion to think it might succeed. How, after all the years of terrible inequality, through colonialism and apartheid, could we possibly imagine a ‘New South Africa’ would work? The scars will never heal. There are scabs over the wounds, even bandages, but underneath there is still pus and pain, and infections ready to spread, to be spread.”

She anguished over the inequalities, like the desperately poor in rural isolation and the squatters on the fringes of rich cities who are told to wash their hands as covid-19 rampages and yet have little access to water. South Africa accounts for about a third of all covid cases on a continent with fifty-four countries. Dozens of pharmacies were damaged during the recent unrest; tens of thousands of vaccine doses were reportedly destroyed. Riddled with corruption, divided politically, unsettled by deadly turmoil, and overcome by the pandemic, the state is increasingly unable to address its people’s woes. South Africa teeters. The one major hope is that the justice system remains robust. “It has been tested and, to be sure, will be tested again and again,” Vale said. “But equality before the law—as a fundamental Constitutional principle—remains an article of faith for the country’s people.” Zuma is in jail. Yet South Africans express more despair than hope. As Platter lamented, “We need another miracle.”