You Are Here: Home » Commentaries/Opinions » Mark Meadows and America’s Problem with Racist Denialism 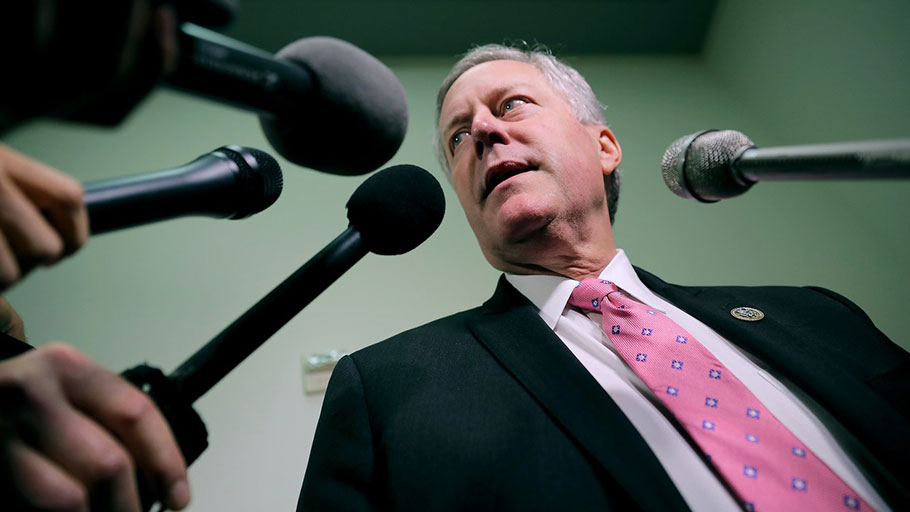 The first step is admitting we have a problem.

On Wednesday, during Michael Cohen’s hearing in front of the House Committee on Oversight and Reform, Republicans attempted a number of stunts to distract from the testimony of Donald Trump’s former personal lawyer on a great many questionable, possibly illicit, deeds.

Rep. Paul Gosar of Arizona, who is 60 years old, lobbed the familiar schoolyard taunt “Liar, Liar, Pants on Fire” in front of a sign emblazoned with the same words. Rep. Jim Jordan of Ohio sputtered on about some bizarre conspiracy theory involving former Clinton associates and some town halls organized by billionaire donor Tom Steyer.

But it was North Carolina’s Mark Meadows, Jordan’s associate on the ultra conservative Freedom Caucus, who drew the most coverage, albeit not in the way he’d hoped. Meadows has become the latest example of Racist Denialism in America’s public eye. But it doesn’t look like he’ll be the last by a long stretch: There’s no way to fix a problem if you can’t admit you have one in the first place. And right now America is drunk on racism.

In an effort to defend Trump from charges of racism, Meadows offered that Trump had never uttered a racist thing to him, a white man, as evidence to the contrary, while aggressively questioning a man who had, Cohen, on his own accounts of bearing witness to Trump saying racist things. But it was his choice to innovate on the long clichéd “black friend” defense that drew the most attention.

Instead of merely citing Trump’s associations with black people, Meadows brought an actual black person: Lynne Patton, a former Trump Organization employee now working in the Department of Housing and Urban Development. She stood silently behind Meadows while he made the preposterous assertion that employing a black person somehow absolved a white man from racist acts—as if American history wasn’t built on examples to the contrary.

Two months ago, we wouldn’t have had a Cohen hearing, never mind a response to this kind of ridiculous racist denialism. But with last year’s election, the makeup of the committee has changed. And Meadows’s antics prompted a quick response from Democratic representatives Ayanna Pressley of Massachusetts and Rashida Tlaib of Michigan, both women of color.

“Would you agree that someone could deny rental units to African-Americans, lead the birther movement, refer to the diaspora as ‘sh*t-hole countries,’ refer to white supremacists as ‘fine people,’ have a black friend, and still be racist?,” Pressley, who is black, asked Cohen in what was more of a statement than a question.

Tlaib went further, pointing out that Meadows was not merely wrong in his defense but was also committing a racist act himself: “Just because someone has a person of color, a black person working for them, does not mean they aren’t racist…that someone would actually use a prop, a black woman in this chamber, in this committee, is alone racist in itself.”

Meadows had a meltdown. He started interrupting Tlaib, as well as committee chairman Elijah Cummings, who is also black, to request that her statement be stricken from the record. In a sputtering defense and on the verge of tears, he went on to cite his relatives who are “people of color” and his friendship with Cummings—yet again, launching proximity to black people as defense against racism. He even called Tlaib “racist” for pointing out that his stunt was racist. In one light, Meadows got his way, derailing the Cohen hearing, so that his hurt feelings could be soothed by members of color.

Following his outburst, Internet sleuths dug up two videos of Meadows hyping the old racist birther conspiracy theory on his own campaign trail. “2012 is the time we are going to send Mr. Obama home to Kenya or wherever it,” he says in one. Sherrilyn Ifill, President of the NAACP Legal Defense and Educational Fund, called his performance “the full playbook of most insulting racism defenses.”

Other commentators cited prominent examples in American history of white men with close proximity to black people acting in overtly racist ways. “Thomas Jefferson had black children. He held them in slavery. Strom Thurmond had a child with his family’s black maid. He opposed every civil rights bill that came up during the 60s and 70s and was openly segregationist. So trotting put a black employee ain’t, excuse me, ish,” wrote New York Times Magazine reporter Nikole Hannah-Jones.

But, of course, a man devoted to exonerating Donald Trump—whose own racist history is well documented—isn’t as concerned with racism so much, if at all, as being called a racist. When asked about his comments about sending Obama “back to Kenya”—a by-the-book racist statement—Meadows claimed “anyone who knows me knows that there is not a racial bone in my body.” In Meadows’ world, the word “racism” can’t be uttered—it is somehow worse than any number of plainly racist statements Trump has made about living, breathing people, from slurs about Native Americans to demonizing Mexicans. No mountain of historical and present evidence to the contrary will convince a man in racist denialism, just like no mountain of empty bottles and cans will convince an alcoholic they drink too much.

Meadows needs to enter into some kind of racism equivalent to AA. The man is in denial, and the first step is admitting you have a problem. He’s not alone either.

In just the past month, Black History Month, no less, the American public has been treated to a steady stream of stories of undeniably racist acts. Almost every single one has been followed up with statements by their perpetrators that they hold no racism in their hearts, bones, or other constituent parts, and some teary-eyed pleading to be released from charges of racism. There has been little accountability on what these racist acts perpetuate and the real victims at the center of their ongoing perpetuation.

In January, Maryland Democratic Party chairwoman Mary Ann Lisanti reportedly called Prince George county a “n***** district.” In her apology statement, Lisanti said, “I am sickened that a word that is not in my vocabulary came out of my mouth. It does not represent my belief system, my life’s work or what is my heart.” It is unclear how a word that is not in one’s vocabulary could possibly come out of one’s mouth. But these are the kinds of mental gymnastics one must perform when they are in racist denialism. This morning, at CPAC, Turning Point USA communications director Candace Owens, who has built a career on racist denialism for Republicans, claimed that racism is over: “I’ve never been a slave in this country.”

Then there is the case of Pam Northam, wife of Virginia governor Ralph Northam, who just a few months ago was revealed to have worn blackface in medical-school yearbook photos. Virginia’s first lady reportedly handed cotton to black high-school pages at the governor’s mansion and asked them to imagine what it was like to pick it as enslaved. Northam released a statement, admitting neither wrongdoing nor racism: “I have provided the same educational tour to Executive Mansion visitors over the last few months and used a variety of artifacts and agricultural crops with the intention of illustrating a painful period of Virginia history. I regret that I have upset anyone.”

It certainly doesn’t help that members of the media continue to push absurd mythology about racism. Townhall editor Katie Pavlich made the head-scratching statement: “Last time I checked calling a black woman a “token” is racism.” She seemed to be confusing doing a racist act with identifying a racist act. Huffington Post reporter Matt Fuller likewise took to Twitter to defend Meadows, “Whatever you think of Mark Meadows, I promise you he wasn’t faking it. He was truly hurt and barely holding it together. Trust me on this.” Here again, a white reporter prioritized the tender feelings of a white man committing a racist act, which was in turn to defend another white man committing even more racist acts, over those actually affected by all of that. It’s enough to make one’s head spin.

These kinds of abstract apologies and silly defenses, of course, put the focus on absolving the people perpetuating racist ideas. They avoid any kind of real responsibility or of contending with their own engaging in various forms of racism, which include not just the most extreme forms, such as lynching or gunning down a church prayer group, but also the kind of head-patting tokenism called racist love. The act of reducing people, whether they are high-school students at a governor’s mansion or attendees at a congressional hearing, to mere stand-ins for their race is racist on its own. And nothing gets better until we drop the excuses, sober up, and survey the damage.

The Congressional Black Caucus: Not Always in Headlines, but Never on the Sidelines

The Congressional Black Caucus: Not Always in Headlines, but Never on the Sidelines
We Need Your Support — Donate, Share, Sign-Up Ways to Support