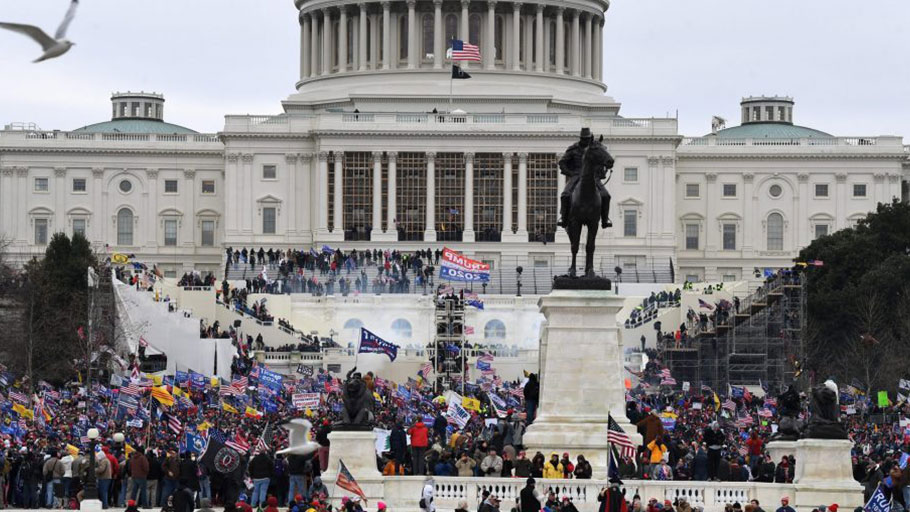 You Are Here: Home » Blog » Commentaries/Opinions » Nailing the Capitol Terrorists Won’t be Easy

Two things are certain about the Capitol terror attack January 6. And one thing isn’t. The certainties first. One, Trump will not be charged with incitement to riot. Yes, there have been soundings from DC federal prosecutors about the possibility of an incitement to riot charge against him. But this is just shop talk and media copy.

The second senate acquittal of Trump pretty much took that off the table. Prosecutors would have to prove that Trump intended to incite the terrorists to seize the Capitol building. This is a virtual impossibility given that Trump grudgingly and belatedly denounced the terrorists and even urged their arrests.

The other certainty is that a lot of the Capitol terrorists have been charged. Many more fear they will be and have rushed to scrub, delete, and trash pictures and videos of themselves participating in the terror attack. But really, how much do they really have to fear?

The charges against those nabbed are still problematic especially in the face of all the tough talk from prosecutors about throwing the book at the terrorists. For the most part the charges against them are disorderly conduct, unlawful entry, and curfew violations. These are charges that could easily be prosecuted as misdemeanors. Only in a few other cases have there been tougher add on charges.

The disorderly conduct and unlawful entry charges can hardly be called sending the hard message federal prosecutors solemnly swear to send. Charges of sedition, murder, and illegal gun possession, though, are charges, that would show that prosecutors really mean business. A small number have been hit with illegal gun charges, and a pack of Proud Boy terrorists have been charged with conspiracy. But none of the terrorists have been charged with sedition. A case could certainly be made for that. There is the long-standing statute imposing the toughest punishment for “seditious conspiracy.” The telling line in the statute is “to oppose by force the authority thereof, or by force to prevent, hinder, or delay the execution of any law of the United States” and or by force to seize, take, or possess any property of the United States.” This obviously is a major federal felony and so is the punishment up to twenty years imprisonment.

Though the FBI and prosecutors say they have spent lots of time trying to get a handle on who was involved in the murder of Capitol police officer Brian Sicknick, no one has been charged. Sicknick wasn’t the only victim of the terrorists, at least 14 officers were wounded during the demonstrations. Two officers were hospitalized, including one who sustained serious injuries after he was pulled into a crowd and assaulted. Yet, again, no assault charges have been slapped on any of the Capitol terrorists.

The instant the first brick was tossed at the Capitol building by the white, pro Trump Capitol terrorists the question was repeatedly asked whether federal prosecutors would really make mass arrests, level tough charges against them, and then pull out all stops to convict. They promised they would. However, too many cases keep cropping up of kid gloves treatment of some of those arrested.

Getting convictions though would be the real test of how hard-nosed prosecutors will be in trying to get serious jail time for the terrorists. Many will have private attorneys who will use every legal dodge possible to prove there was no intent or even harm caused by their presence there and that they were simply exercising their right to free speech and assembly and protest. They’ll have the passage of time, and the public and media moving on to other issues, in their favor. It’s also certain that many in the GOP other than a perfunctory denunciation of violence will maintain a mute silence about them and their actions.

Trump set the template last June supposedly for punishment of those who damage federal property and incite mob violence against the feds.

With his usual Trumpian tough talk law and order rhetoric, and much fanfare, he signed an executive order that mandates prison sentences up to ten years on anyone damaging federal property. Trump had only one group in mind when he penned the executive order. That is the Black Lives Matter protesters or, as he indelicately put it, “agitators who have traveled across State lines to promote their own violent agenda.”

Prosecutors continually assure that the charges are just the beginning, not the end of their purported crackdown on the terrorists. Time will tell just how true this is. One thing, though, that time has proven is that when it comes to getting after white terrorists who wreak mayhem, havoc and even murder in the name of their beliefs, the jury is always way out on how they will be handled. The frightening thing though is that many of the cases may not even get to a jury. And the few that do, may end up the same way Trump’s did when his case got to the senate jury—acquittal.