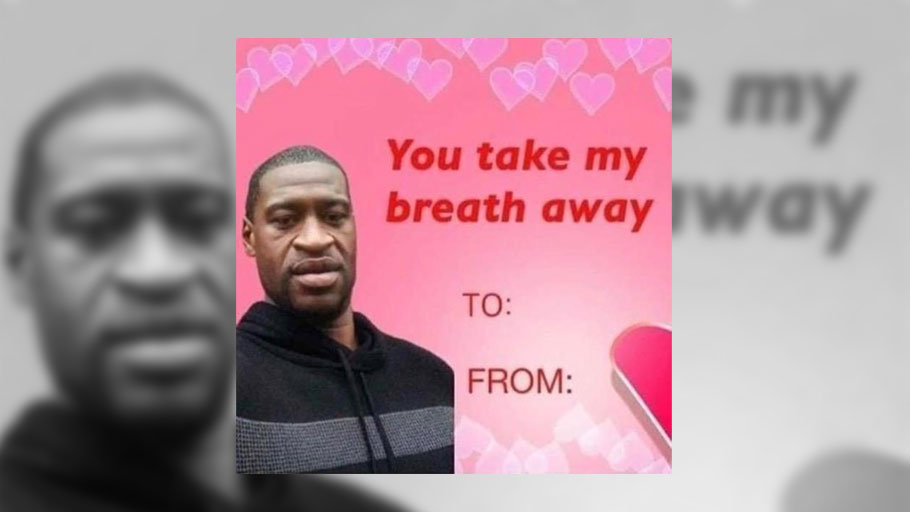 By Earl HutchinsonFebruary 16, 2021No Comments

You Are Here: Home » Blog » Commentaries/Opinions » Racist Valentine’s Day Card Shows LAPD Still has Work to Do to Break the Code of Racist Silence

When word hit that a phony Valentine’s Day card was being circulated among LAPD officers that mocked the slaying of George Floyd, a bevy of LAPD police and city officials expressed outrage. All promised a thorough investigation, and tough punishment of whoever the perpetrator is of the obscene, disgusting, and hate filled card. The indignation from on top is all well and good. However, it begs one, actually two, maybe three, sticky questions. One, why did the perpetrator feel that it was Ok to circulate such a racially charged offensive card in the first place? Two, how many LAPD officers were offended by the card, or not? And three, if the officers were indeed offended why didn’t they, and not the brass, instantly react in outrage and blow the whistle on the offender or offenders?

The slaying of Floyd ignited mass marches, protests, demonstrations, and handful of civil disturbances. It prodded every political leader, including even Trump, to speak out on the slaying. The slaying ignited a deep soul search, once again, on the continued cheapness of Black lives and how cavalierly and wantonly some cops and some departments continue to extinguish them.

Unfortunately, what the Floyd slaying didn’t do, or certainly do enough of, was force police departments to go full bore to purge the culture of silence from their departments. The fact that such a racially heinous, despicable, card mocking a killing could be circulated within the ranks of the LAPD is stark proof of that. Now LAPD officials, the L.A. Police Commission, and even the L.A. Police Protective League have repeatedly denounced and promised to crack down on the blue code of silence. There are rules and regulations in place that mandate that officers who witness any abusive, and yes, racist acts, by other officers challenge them and report them.

But the more galling thing that we still see is that officers within these departments and more than a few administrators also know that their fellow officers blatantly break the law. Yet, none, or few, still step forward to blow the whistle on them.

Here’s how deep, prevalent, and terrifying the blue code of silence continues to be in police culture. The National Institute of Ethics in a study commissioned by the International Association of Police Chiefs surveyed hundreds of cops in 21 states. They found that nearly 80 percent of cops said that a code of silence exists, more than half said it didn’t bother them, almost half admitted that the code was strongest when excessive force was used, and half also admitted they had witnessed misconduct by another officer but kept their mouths shut about it.

Why? Because in many cases they were told to keep quiet by other officers and in even more cases by department higher-ups. And if they didn’t, they were scared stiff that they would be ostracized; the officer who committed the misconduct would be disciplined or fired; or worse, they’d be fired, or at the very least would be “blackballed,” or that their bosses would simply blow their complaint off. A significant number of them said they wanted to speak out about the abusive acts of fellow officers but were pressured by “uninvolved officers” to keep quiet.

But there’s not and never has been any need for officers to quake at that prospect. Courts have sided with officers in the few times that they have broken ranks and called out other officers to higher-ups for misconduct from beatings to the shooting of suspects or civilians. In one case an appeals court in California went further and reminded police officers and officials in a ruling on the issue that it’s the legal and professional duty of an officer to report misconduct by another officer. It’s a protected constitutional right and that any form of retaliation against the officer for speaking out is illegal.

The problem is that few police departments pound this point home to rank and file officers or for that matter to their superiors. Put bluntly, telling them, and continuing to tell recruits at the academy, officers in orientation and training sessions, and in their performance evaluations that the department has zero tolerance toward police misconduct. That if an officer witnesses it, they are duty-bound to report it. If they don’t, they are just as guilty of law breaking as the cop that breaks the law.

LAPD officials reacted with anger and indignation at the hideous fake Valentine’s Day card mocking Floyd’s slaying. The brutal truth, though, is that its very existence speaks volumes that the racist blue code of silence is still alive and well at least among some within LAPD ranks.

This silence makes it possible for bad cops and bad administrators to get away and keep getting away with abusive acts. It’s the single biggest thing that jades minorities and increasingly much of the public toward cops, and reinforces the notion that all cops routinely lie, cheap and cover up abuses. The racist Valentine Days card certainly didn’t help matters for the LAPD.