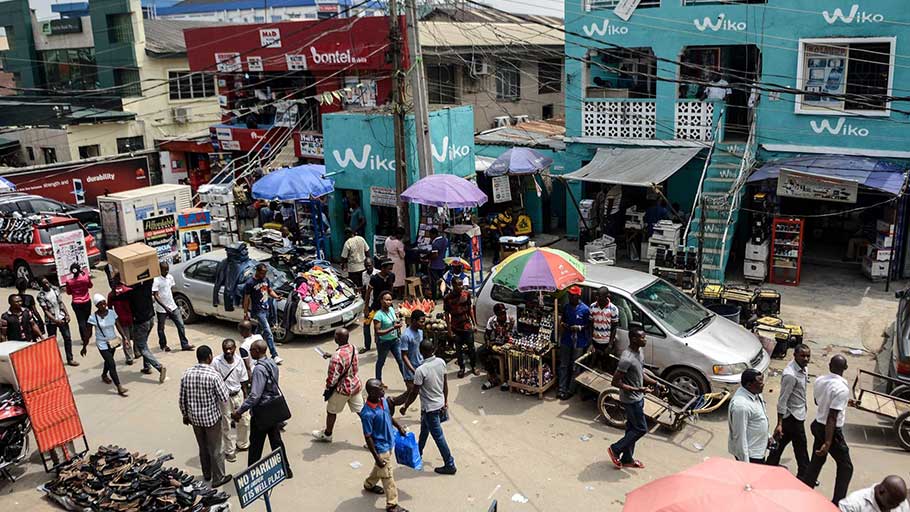 Without the startup ecosystems of the West, Nigerian entrepreneurs are building their nation, innovation by innovation.

Any entrepreneur in Nigeria faces high operating costs brought on by the country’s unstable power supply, shaky internet and a fluctuating currency. Undaunted, Nigeria’s tech startups have proliferated, kick-starting a young but thriving tech scene that has earned Lagos’ colonial-era Yaba neighborhood — where many have their offices — the nickname “Yabacon Valley.”

But the ecosystem needed to support these new ventures has yet to mature, say investors and entrepreneurs, in addition to the physical infrastructure challenges. At stake is the opportunity to build the next “unicorn” (a startup valued at $1 billion) in a country that in just over three decades is projected to surpass the U.S. in terms of population, reaching 400 million people by 2050.

“Nigeria is set to double [in population],” says Kola Aina, founding partner at venture capital firm Ventures Platform. “It won’t be government or grants that will solve Africa’s problems. Entrepreneurs will drive the scale and scope of change.”

We Want to Play Every Part of the Ecosystem.
Olufunbi Falayi, Co-founder of Passion Incubator

A cohort of Africa-focused investors is now working to build the financial support needed to nurture startups created to address rising demand for adequate health care, education and an improved food supply.

That is in part because smaller startups in their early days struggled to access the resources required to expand. Investment houses are now trying to build pathways for startups to grow to the point where bigger investors would be comfortable allocating larger amounts of capital.

“Access to the market is just as important as access to money. Our strength lies in working with early-stage companies and then connecting them with investors down the road,” says Olufunbi Falayi, a co-founder of Passion Incubator, based in Lagos.

To overcome expensive connectivity and energy-generation costs, Nigeria’s entrepreneurs often wear several hats to reduce shared overheads. “We want to play every part of the ecosystem,” says Falayi. In addition to funding and mentoring pre-seed startups, Passion also operates a consulting service and a coworking space.

Some of the most active investors focus on funding the earliest stages of a budding startup, scouting pitches from founders at the seed and even pre-seed stage. The check sizes are relatively small compared to Silicon Valley, but they have outsize impact.

“We are taking that risk, giving startups the first stamp of approval that gives them access to press, customers and other investors,” says Yele Bademosi, managing partner of the tech investment fund Microtraction, which he describes as an “institutional angel investor.” The fund has a rolling call for pitches and will write initial checks of $15,000, followed by an additional $50,000 convertible note (debt that converts into equity) at a later phase.

The fund has already had success; it was a seed investor in Paystack, a Lagos-based online payments platform (see box below). Bademosi says Microtraction is now exploring a model in which it gives $5,000 grants without taking any equity in nascent startups.

An influx of capital has opened opportunities for Nigerian entrepreneurs looking to address pressing deficits in basic needs such as health care. Nosa Igbinedion, the founder of Olubrain Technologies, which builds custom digital products, says successful startups are those that service the bottom rung of society.

As more Nigerian startups grow big enough to attract capital from global investors, some worry that the guiding forces on its tech scene will ultimately reside outside the country. As much as 80 percent of tech funding is offshore, say investors, because of factors including the volatility of Nigeria’s currency. That, in turn, raises concerns about the ability to reinvest returns in the country.

“If [technology] is built by foreign capital, the risk is you won’t enjoy the dividends of the future and develop localized solutions to real needs. Who owns technology determines access,” says Abas Idaresit of Greentree Investment Company, based in Lagos.

Tech-driven solutions can have life-and-death impacts in Nigeria, says Echo VC’s Omoigui, even if global investors have not caught up to Nigeria’s entrepreneurial opportunities.

“What is lacking is a sense of urgency,” he says. It’s “really hard” building an ecosystem in Nigeria, “but this is what we were born to do.”

Investors have been especially excited about addressing the country’s ailing financial services sector, where something as simple as virtual payment can still take weeks.

Nigeria lacks the mobile cash platforms, such as Mpesa, that have taken off in eastern African countries such as Kenya. Patchy digital connections mean Nigerian businesses still handle many of their payments through cash or time-intensive direct bank transfers.

In 2016, online payments platform Paystack was selected as the first Nigerian startup to participate in the Silicon Valley accelerator Y Combinator. Investors from Chinese tech giant Tencent were present at the accelerator’s demo day. Tencent later participated in Paystack’s $1.3 million seed round of investment and an $8 million series A round this August, led by San Francisco–based payment company Stripe.

Numerous startups are also aiming to supplement the private education sector, filling the gap left by an ailing public sector that has struggled to pay salaries and overheads. “Private education does not connote upper class here,” says Uche Onuora, chief executive of Hitch.

The company supplies video boxes preloaded with free educational material matched to state curricula, which can be connected to a projector or computer (above). Batteries extend usage by another six hours so electricity outages do not cut lessons short. “We provide experiences to people at the lower end of the pyramid,” says Onuora.

Hitch, like Paystack, is also part of a batch of startups that are making inroads into China. Early next year, Hitch will begin a residency at Shenzhen-based accelerator HAX, with a view to mass-producing components in the country.

Judith Okonkwo is also looking to bridge the hardware gap in education. The founder of Imisi 3D, a startup that provides access to virtual reality equipment to other startups and schools, Okonkwo holds regular hackathons and educational events to promote VR applications.

However, traditional VR equipment retailers do not ship equipment to Nigeria. As a result, Okonkwo hauls every piece of her VR laboratory — including five computer monitors — in her suitcases on several international trips. She is now looking to develop cheaper, potentially solar-powered VR sets to provide to schools.

Still, the challenges of operating in Nigeria are worth the initial expense, say entrepreneurs. “Nigeria is a gateway to Africa,” says Onuora. “If you solve a problem in Nigeria, you can scale it across Africa.”