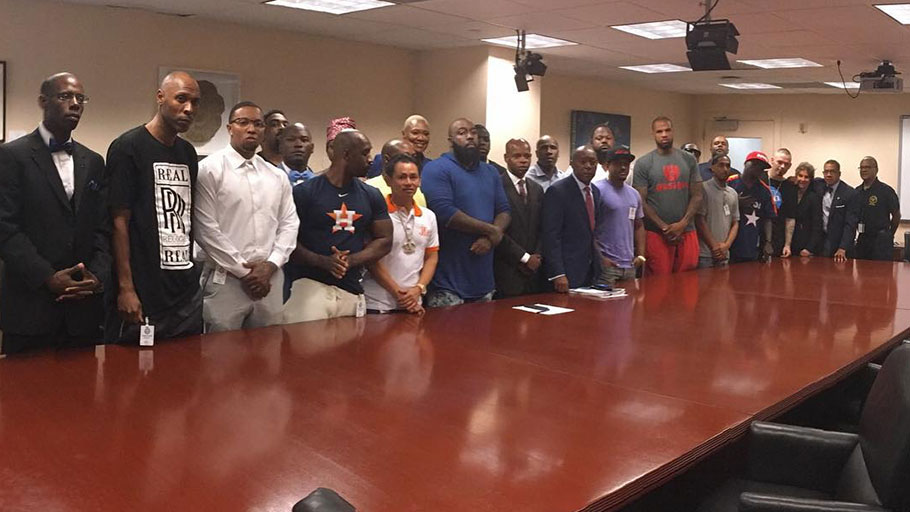 Nipsey, And Others, Dispel Thug Image of Black Males

You Are Here: Home » Blog » Commentaries/Opinions » Nipsey, And Others, Dispel Thug Image of Black Males

Houston rappers are putting their money in the only African American bank in Houston Unity Bank in third ward.

There are two stories that regularly make the rounds about men like Nipsey Hussle. The one story that should be routinely told, pointed to, and held up for all is the colossal refutation of the gangster and thug image much of the public holds of men such as Nipsey. Yet, this never gets more than passing mention. It took the massive media spotlight on Nipsey’s killing to get some of that story told.

It’s the story of rap guys opening businesses, setting up foundations to promote educational excellence, sponsoring sports and arts programs, and launching anti-gang violence initiatives. It was good to see many tick off the stunning array of businesses, and education programs, and the activist campaign around the Trayvon Martin murder that Nipsey engaged in. There was the promise of much more to come. It was refreshing to see the spate of articles that named names of rappers who are giving back to their communities, and the impact that they are having when they do. Nipsey was not unique. He was simply following a path trod by a number of others.

Unfortunately, it’s the other story that is endlessly worked over, rehashed and used as a hammer to savage guys like Nipsey. Predictably it was dredged up again the instant Nipsey was gunned down by another would-be rapper and gang member. The story began a few years back when media outlets took shocking note of a deadly and disturbing phenomenon. A lot of rap artists were suddenly turning up dead.

Dead actually is not the right way to describe their deaths. They were murdered, and their murderers in almost all cases were other rappers, or their friends, or the associates of rival rappers. The most celebrated killings were those of rap big wigs Tupac Shakur and Notorious BIG. The rap victims were killed at parties, at nightclubs, in recording studios, or while sitting in their cars. One was even killed while allegedly trying to knock over a convenience store. Since then the body count has climbed even higher with the latest casualty figure being Nipsey.

His murder along with those of the others killed again tossed an ugly glare on a problem that has bedeviled the rap business, and a bigger problem that chronically plagues young black males. The personal feuds, jealousies rivalries, and unvarnished gangsterism that is rife among some in the rap industry has deeply planted the sordid image in the minds of many that the rap industry is synonymous with gangs, crime and violence.

The murders of the rappers have done more than batter an image of an industry still branded and universally reviled as violent, self-destructive and self-indulgent. It reinforced the stereotype of young black males as inherently gang attracted and violence prone. It is a vicious and unfair stereotype since the overwhelming majority of young black males do not engage in the gratuitous violence of some in the rap world. They have gotten the emblematic rap as being a part of that world because the gun toting rappers and their violence prone hangers ons feed off the bad actor lifestyle and play hard on the us versus them volcanic rage of some young blacks, such as Nipsey’s alleged shooter.

But even here there’s no straight-line connection between settling what was an apparent grudge with gunplay and the supposed poverty and dysfunctionality that fuel murder within black communities. Nipsey’s alleged shooter did not hail from a run-down project, with a single parent, or no parent in the home. His parents are middle class professionals that live in an upscale part of Los Angeles. How and why their son wound up in gangs, prison, and blasting away at Nipsey is anyone’s guess. However, to see him, like many saw Nipsey, as a warped, and grotesque product of inner-city life, is a grotesque distortion and caricature that reinforces the stereotype of the thug image of black males.

Stereotype because there is never a rush to slap the dysfunctional thug image on say the Parkland Florida high school shooter. Or, the countless other young white guys who have resorted to deadly gun play at malls, schools, and work places the past decade and have wreaked monumental chaos and death on hundreds of innocents. Many of them hail from upstanding, middle and even upper class to parent homes. They stir revulsion, but they also stir head scratches and a search to figure out just how they could have turned into the monsters they are.

None of this is consolation to Nipsey and his family. He was murdered and his alleged murderer is another young black male. However, the consolation is that neither Nipsey, or his alleged killer, conform to the notion that murder and mayhem is the trademark of rappers such as both men. Nipsey’s story of business and professional achievement and caring dispels that notion. The beauty of it is that it’s a story that is told and acted on every day in his world. It’s a story we must continually tell one and all.

Earl Ofari Hutchinson is an author and political analyst. He is the author of Why Black Lives Do Matter  (Middle Passage Press). He is a weekly co-host of the Al Sharpton Show on Radio One. He is the host of the weekly Hutchinson Report on KPFK 90.7 FM Los Angeles and the Pacifica Network.