No Trump, No Maduro, No War: Socialists Should Take a Stand on Venezuela

You Are Here: Home » Commentaries/Opinions » No Trump, No Maduro, No War: Socialists Should Take a Stand on Venezuela 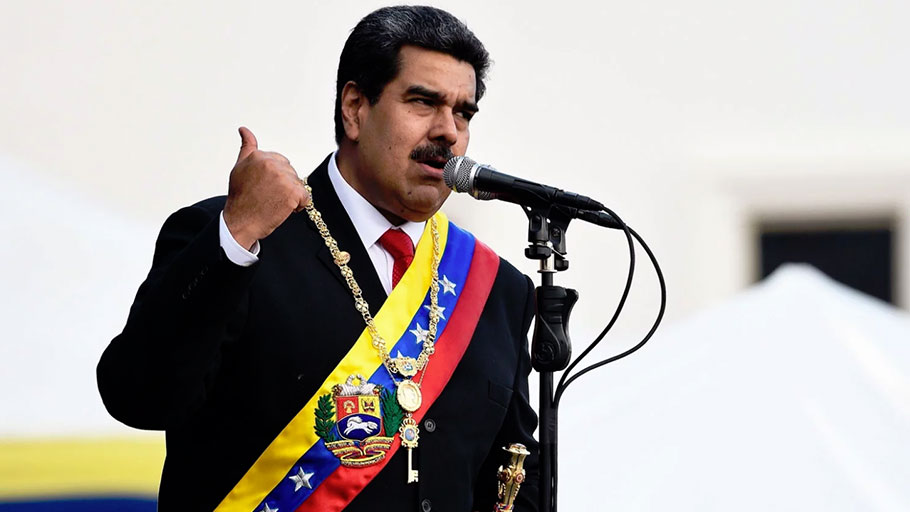 Trump’s policy is not just to recognize an “interim” president, but to threaten military action against Maduro and impose sanctions that will leave the U.S. owning the starvation.

Donald J. Trump, the oppressively dim president of these United States, was elected by a majority of white people who cast ballots but only a minority of the popular vote, and only then with the actively solicited help of a foreign intelligence service. His closest allies are gaudy authoritarians who murder their critics without so much as a plausible cover story. He does not, one must conclude, give half a goddamn about democracy—not in the United States, not in Saudi Arabia and certainly not in Venezuela, where his point person is a man, Elliot Abrams, whose obituary will include the term “right-wing death squads.”

It is an obvious point, but one necessary to make in a world where implausible statements from an incoherent president are still treated with legitimacy by a class of reporters and pundits trained to show undue respect to those who wield power, corporate or political and nowadays both. Trump cares about Venezuelans, whom his government routinely deports, about as much as he cares about his own children, which is not to say “a lot.” If he cared about corrupt elites ignoring the opposition-held legislature on their way to bankrupting a country for profit, he would resign, or at least hand back the $500,000 he received from the Venezuelan state for a party on his inauguration.

It is good and just to be an irritant on this point, but it is equally important that it not be the only one that is made. When Trump talks about democracy and poverty in Venezuela unconvincingly, what he says that is discernible is not necessarily wrong; the former is indeed lacking, in Caracas and Washington, and the latter abundant. As in the imperial core, the Venezuelan government has usurped its constitutional authority. I know, in part, because I was paid by it, working as an editor at the state-sponsored teleSUR, based in Ecuador, a former sponsor (its governing social democrats recently withdrew).

In late 2015, when the opposition coalition won the National Assembly with 56 percent of the vote, the expectation was that my employer would go down with the dethroned ruling party—the expectation being that legislatures, not presidents, determine spending priorities. And the opposition did not like us.

That did not happen. Maduro, instead, claimed the authority to pass budgets by executive fiat—in the U.S. democracy, presidents declare a “national emergency” to do that—helping preserve the delicate balance of power that has led the military, enriched by smuggling and the self-inflicted currency exchange system that fuels it, to stick with his administration. He then created an extralegal body, called a Constituent Assembly, that has the purported power to rewrite all laws.

Filled with party loyalists, the assembly was declared illegal by Venezuela’s attorney general, Luisa Ortega Díaz, who had been appointed by Hugo Chavez in 2007; she was forced to flee the country, another Chavista labeled a right-wing plotter by a government that has betrayed the poor. Maduro then won a presidential election, after banning his leading opponents, in a vote that, according to the United Nations, “does not in any way fulfill minimal conditions for free and credible elections.”

The international left, then, should have taken notice and—supporters of Maduro or not—urged against the dismantling of democracy, and walking back from the precipice; friendship is not telling a drunk comrade that they are a great driver and thus ceding the moral high ground to the cop that pulls them over.

“The big problem is that… the Maduro government did not implement a sensible exchange rate policy, so it created a tremendous amount of opportunity for corruption,” says Greg Wilpert, the former head of teleSUR English, and the husband of a Venezuelan diplomat.

The state oil company, PDVSA, has also been looted by corruption. While at teleSUR, I reported that the U.S. government had thoroughly infiltrated its computer system—reporting that Maduro cited on television. That act of electronic espionage coincided with the U.S. government’s successful pursuit of embezzlement charges against the Venezuelan elite.

This is theft on a grand scale, corruption fueled at the expense of social programs, health care spending slashed while the politically connected pilfer billions of dollars. And rather than tackle it, Maduro’s government “is attacking the most impoverished people that it claims to defend,” in the words of Erika Guevara-Rosas, Americas director at Amnesty International.

Her group documented the extraducial killing of at least six people at the hands of an elite state security force, among dozens killed in the span of days earlier this year, the barrios that under Hugo Chávez were government strongholds assaulted for turning out to street protests under his successor.

But acknowledging this is not sufficient, either; there needs to be that alternative. The Trump administration’s answer to all this is to not just recognize an “interim” president, but to threaten military action, however implausibly, and even worse: impose the sort of sanctions that actually will cause the U.S. to take ownership of the ensuing starvation.

“If these sanctions don’t force the endgame soon, they will cause a lot of pain for the people,” said José Bodas, an anti-government labor organizer interviewed by The New York Times. “The rich will not stop getting richer, it’s the workers who will shoulder the cost of these measures.”

There is another camp, besides that of apologists or aggressors. As the dissident Chavistas of Marea Socialista, a left-wing political party, have put it, “Maduro, the people don’t want you, and Guaidó, no one elected you”—a necessary reminder when some members of the opposition, high on their own perceived legitimacy, suggest an “interim” government could end up governing for years.

In the United States, this position has been echoed by Sen. Bernie Sanders, who issued a statement stressing opposition to any foreign-imposed regime change in Venezuela—while noting Venezuelans should be provided the opportunity to change their regime on their own, if they so choose.

While some decried the soft imperialism of the presidential candidate, his statement was reported without critique by Aporrea, a left-wing collective with a news website and an increasingly disenchanted take on Chavismo. Sanders’ call echoes socialist and former Uruguayan president José Mujica, who has argued that, like it or not, new and free elections present an alternative to disaster: foreign intervention, economy-crippling sanctions or a civil war.

Marea Socialista and the revolutionary left would like a poll, too, but on a more fundamental question: does this system, now fought over by two leaders with limited popular support, have any legitimacy at all? Begin the democratic transition by starting from scratch.

International solidarity with this democratic struggle matters. The Venezuelan government, like all others, cares about how it is perceived abroad; if leftist revolutionaries noticed Bernie Sanders’ statement, one can be sure the state with an international news outlet did, too. It cares enough to provide free vacations for tourists willing to spout its line on social media.

Governing institutions should not be confused with people, and solidarity with states behaving badly only discourages the self-criticism that a genuinely revolutionary movement should crave. In Venezuela, this encourages the same self-defeating behavior, escalated since the defeat of 2015, that has led a majority of Venezuelans to feel their government does not act with their best interests in mind. Neither Maduro, Guaidó nor Trump, and true democracy for all, in the workplace and at the ballot box, at home and abroad: let that be the seed of a truly internationalist and democratic socialism for the 21st century.

Another Look at W.E.B. Du Bois