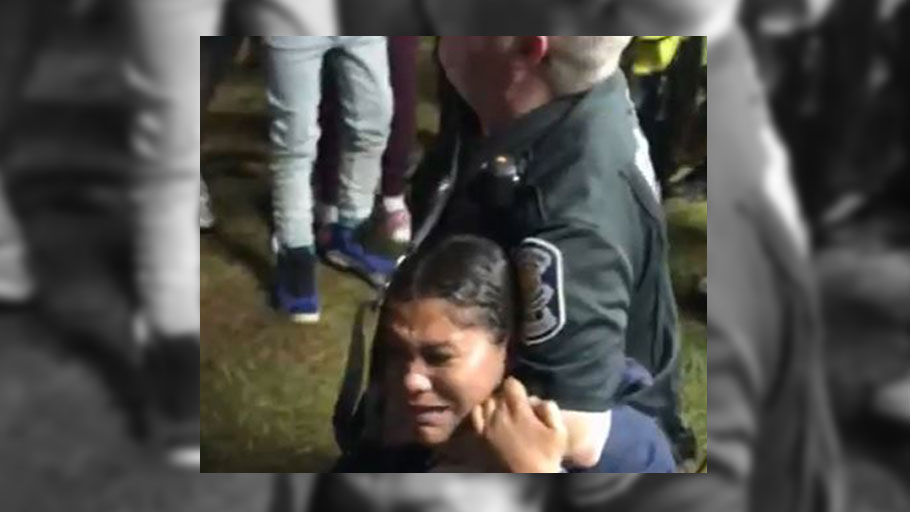 Pantaleo May Be Out But the Chokehold Isn’t

You Are Here: Home » Blog » Commentaries/Opinions » Pantaleo May Be Out But the Chokehold Isn’t

Screenshot from cellphone video of Pennsylvania officer putting a 14-year-old Black girl in a chokehold.

NYPD officer Daniel Pantaleo was finally given the official boot by his department. He was fired for violating department policy. The issue was his use of the chokehold in the slaying of Eric Garner. Police departments nationally scrambled furiously in the aftermath of the chokehold death of Garner in 2014 and the non-indictment then of Pantaleo to publicly declare that they do not use the chokehold. They waved and cited inter-department regulation after regulation to prove that they bar the use of the hold, don’t teach it to officers, and that many officers themselves say they wouldn’t know how to use it anyway.

That’s not the end of the chokehold story. Periodic lawsuits brought by victims of the chokehold against departments at various times over the years show that some departments and officers do use the chokehold or a variant of it to subdue suspects. The U.S. Supreme Court made that possible. Nearly four decades ago it could have ended the chokehold use. It didn’t. In 1976, Adolph Lyon, a young African-American motorist was stopped by the LAPD. Lyon offered no resistance but was still wrapped in a chokehold by an officer. Lyon was severely injured as a result of the hold. He promptly sued and sought a court injunction against the hold.

The case appeared solid on several grounds. He could show a disparate use of the hold against African-Americans. The had used the chokehold with impunity for years, and in one span the majority of the 16 of the victims that died as a result of the chokehold were black. This appeared to fall under the purview of the constitutional provision barring cruel and unusual punishment. In sworn testimony officers made jokes and wisecracks about how some suspects placed in the chokehold danced and squirmed uncontrollably. The officers admitted that they had no knowledge of the lethal effect of the hold and that their training officers did not bother to tell them of the life threatening danger of the hold.

The case meandered through the courts for years. Meanwhile, the LAPD publicly claimed that it had temporarily suspended the use of the hold pending a high court decision. But other police departments continued to use the chokehold with no legal or departmental restraints. The death toll continued to mount. One of them was the New York police department which also had a massive number of complaints about the hold and the injuries it caused.

In 1983, the court finally spoke. In a stunning majority opinion it flatly said that federal courts had no power to prohibit the use of the hold. It didn’t stop there. It added that “there was a real and immediate threat that Lyon would again be stopped… by an officer who would illegally choke him into unconsciousness.” Translated, a victim could be subject to its use again if stopped by a police officer and it posed no threat to him. This was an open license to continue to use the chokehold. In a blistering dissent, Justice Thurgood Marshall blasted the absurdity of the legal logic behind use of the chokehold: “Since no one can show that he will be choked in the future, no one — not even a person who, like Lyons, has almost been choked to death—has standing to challenge the continuation of the policy.”

An exultant LAPD chief Daryl Gates claimed victory and said that it vindicated his contention that the chokehold was an appropriate tactic to be used. Gates then transformed himself into a medical anatomical scientist and claimed that maybe there was something in the physical make-up of blacks that was different from that of “normal people” that predisposed them to drop dead from the hold. Gates’s over the top racist, inflammatory gibe ignited a storm of protest, and a red faced Gates slightly back pedaled on it. The same year the LAPD officially barred the use of the chokehold. The NYPD followed suit and in the next decade other departments fell in line and officially banned the use of the hold.

In the three decades since the court refused to bar the use of the hold the record still is that there is nothing in law or public policy that officially precludes any police department from putting the chokehold or a variation of it back in its weapons arsenal. In fact, a decade after the LAPD officially barred the use of the hold it was back on the table again following the beating of black motorist Rodney King in 1991. The LAPD debated whether to reinstate the chokehold again on the grounds it was a less lethal way to subdue a suspect. Though it chose not to, surveys then found that the overwhelming majority of officers backed the use of the hold and said they saw no danger in its use.

The double tragedy in the Garner slaying was, of course, his senseless death but also that his death does not alter the fact that the chokehold still remains on the official books as a weapon that police officers can use. And Pantaleo’s firing certainly doesn’t change that either.

Earl Ofari Hutchinson is an author and political analyst. He is a weekly co-host of the Al Sharpton Show on Radio One. He is the author of Why Black Lives Do Matter (Middle Passage Press) He is host of the weekly Hutchinson Report on Pacifica Radio.