Racism is behind anti-Asian American violence, even when it’s not a hate crime

You Are Here: Home » Blog » Commentaries/Opinions » Racism is behind anti-Asian American violence, even when it’s not a hate crime 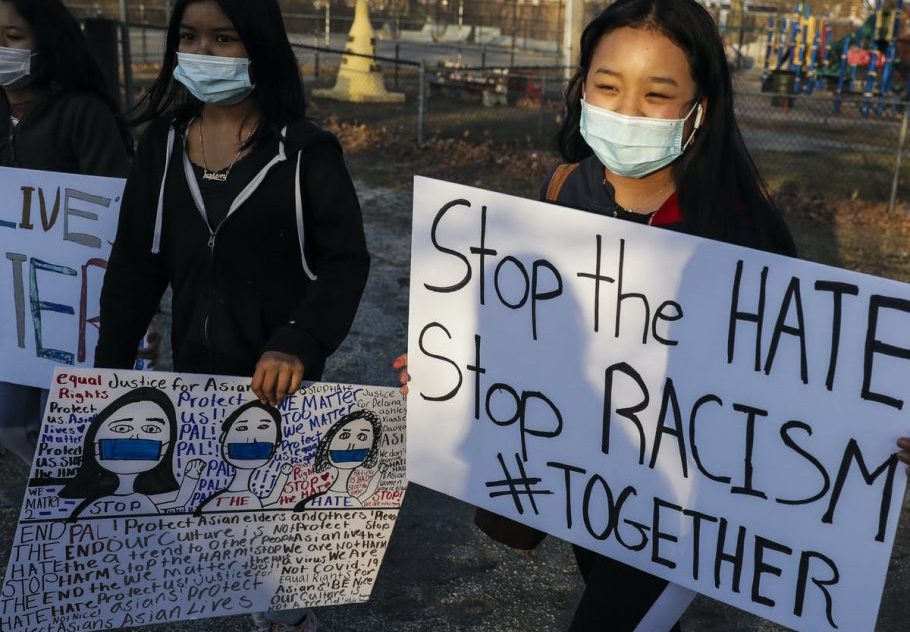 Over the past year, attacks on Asian Americans have increased more than 150% over the previous year, including the March 16 murders of eight people, including six Asian American women, in Atlanta.

Some of these attacks may be classified as hate crimes. But whether they meet that legal definition or not, they all fit a long history of viewing Asian Americans in particular ways that make discrimination and violence against them more likely.

I have researched and taught on Asian America for 20 years, including on the pernicious effects of stereotypes and attacks on individuals. Race can play a role in violence and prejudice, even if the offender does not clearly express a racist intent.

Much remains unknown about the attacks in Atlanta, but the man charged with the murders has said he did not have a racial prejudice against people of Asian descent. Rather, he has claimed he has a sexual addiction. But that statement indicates that he assumed these women were prostitutes, whether that’s true or not.

This assumption, and the resulting violence, is just one of many that Asian Americans have suffered through the years. 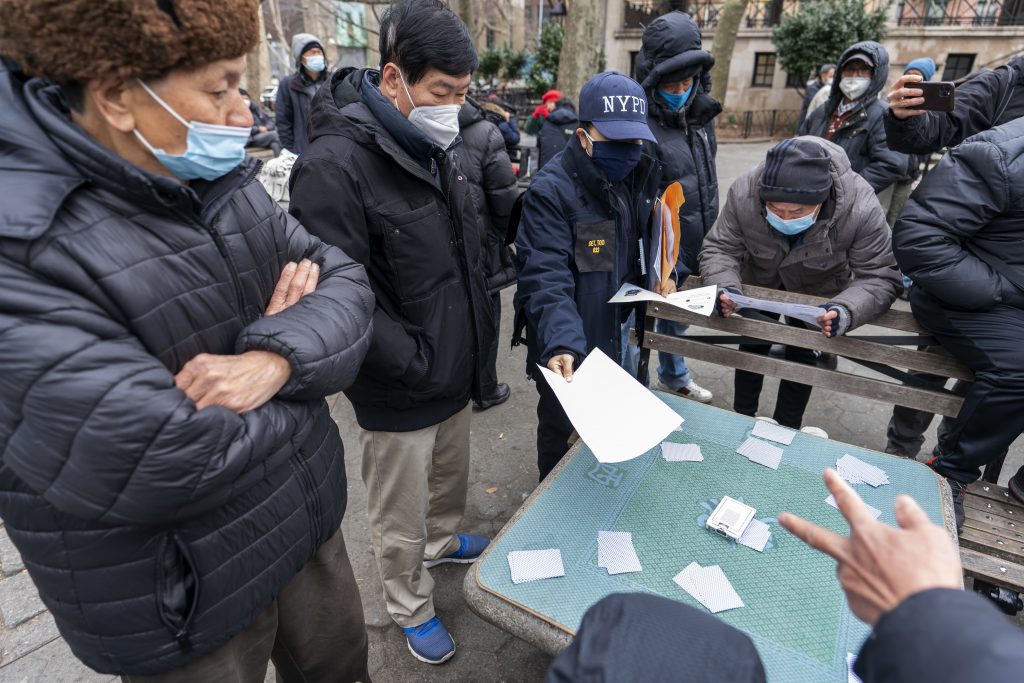 In this March 17, 2021, file photo, Detective Suk H Too, second from right, with the New York Police Department Community Affairs Rapid Response Unit hands out fliers with information on how to report hate crimes to residents while on a community outreach patrol in the Chinatown neighborhood of New York. Asian Americans, already worn down by a year of racist attacks fueled by the pandemic, are reeling but trying to find a path forward in the wake of the horrific shootings at three Atlanta-area massage businesses that left eight people dead, most of them Asian women. (AP Photo/Mary Altaffer, File)

A long history of prejudice

The presupposed connection between Asian women and sex dates back almost 150 years: In 1875, Congress passed the Page Act, which effectively barred Chinese women from immigrating, because it was impossible to tell if they were traveling “for lewd and immoral purposes,” including “for purposes of prostitution.” The assumption that all Chinese women were of questionable moral character placed the burden on the women themselves to somehow prove they were not prostitutes before being allowed to immigrate.

The U.S. military contributed to this conception of Asian women as hypersexualized. During the wars in the Philippines at the start of the 19th century, and during the mid-20th-century wars in Korea and Vietnam, servicemen took advantage of women who had turned to sex work in response to their lives being wrecked by war.

In the 1960s, the U.S. government brokered a deal with Thailand to be a “rest and relaxation” center for military personnel fighting in Vietnam. That bolstered what became the foundations of Thailand’s modern-day sex tourism industry, which attracts men from the United States and Europe.

This association of Asian women with men’s sexual fantasies has permeated popular culture, such as a scene in the 1987 Stanley Kubrick movie “Full Metal Jacket” in which a Vietnamese woman entices two servicemen by saying, “Me love you long time,” and regular themes in the animated comedy “Family Guy.” This makes Asian women more desirable to sex traffickers, brought over to serve male desires in spas and massage parlors such as the ones attacked in Atlanta.

This history of sexualization of Asian women, shaped by the U.S. military and patriarchy, creates the backdrop to the Atlanta shootings. It helped create the conditions for the Asian spas and massage parlors to be there in the first place. It presents Asian American women as submissive, responsive agents of sexual temptation.

Race and gender inform what happened, and the public response to it, whether the alleged shooter articulates racist motives or not. 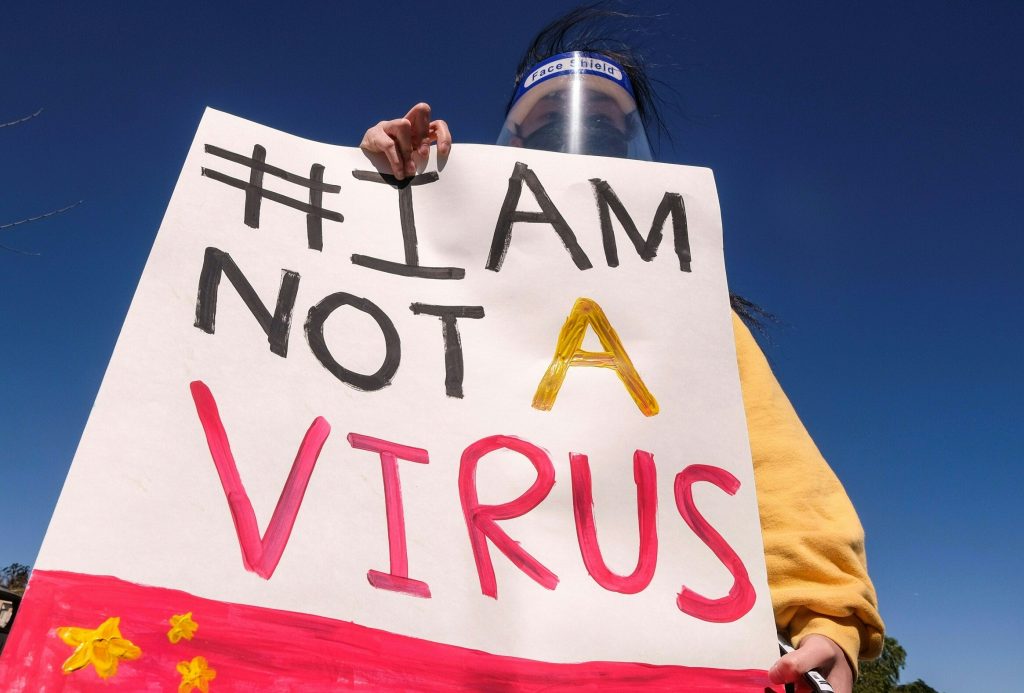 Tracy Wong wearing a face mask and holding a sign takes part in a rally to raise awareness of anti-Asian violence, near Chinatown in Los Angeles, California, on February 20, 2021. – The rally was organized in response to last month’s fatal assault of Vicha Ratanapakdee, an 84-year-old immigrant from Thailand, in San Francisco. (Photo by RINGO CHIU / AFP) (Photo by RINGO CHIU/AFP via Getty Images)

For instance, many elderly Asian Americans have been shoved to the ground in recent weeks, and Vicha Ratanapakdee, an 84-year-old man, died in one such incident in February in San Francisco.

The public defender representing the accused perpetrator in Ratanapakdee’s death denies that race motivated the crime. But that is different from saying race was not a factor at all.

Practically all Asian Americans, but elderly men in particular, are often viewed as nonaggressive, meek and unable or unwilling to fight back, in contrast to men of other races. They are easy targets.

It’s not always a crime

Other anti-Asian American racism isn’t criminal at all, but still fits with the nation’s racist history. As COVID-19 spread across the U.S., Asian-owned restaurants and stores were the first to experience declining revenue, even though most of the earliest cases in the U.S. came from Europe.

There is a long history of suspecting Asian Americans of carrying disease into the U.S., which made it seem natural for people to avoid Asian American-owned businesses. President Donald Trump’s repeated public declarations that the “Kung Flu” virus came from China reinforced those feelings.

This race-based and erroneous assumption has resulted in Asian Americans having among the highest unemployment rates in the nation, though they had among the lowest before the pandemic.

It defies logic to claim that race isn’t relevant in attacks on Asian Americans unless the perpetrator actively references it. Research has found that most Americans assume a person of Asian descent is foreign-born, unless there is some aspect of their appearance that clearly marks them as American – such as being overweight.

Asian Americans of all types experience this perception of being “forever foreigners” in a wide range of ways. Regardless of whether some or all – or none – of these latest assaults on Asian Americans are proved to be hate crimes or not, race plays a historic role.

Tanzania’s John Magufuli: a brilliant start but an ignominious end

Tanzania’s John Magufuli: a brilliant start but an ignominious end
We Need Your Support — Donate, Share, Sign-Up Ways to Support