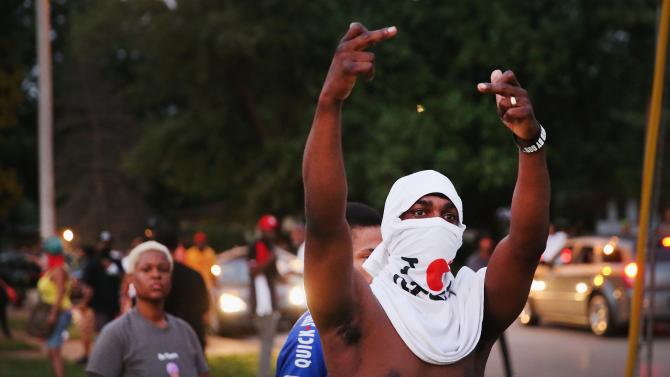 Rage Is the Right Response to What Happened in Ferguson

You Are Here: Home » Blog » Commentaries/Opinions » Rage Is the Right Response to What Happened in Ferguson

By: Stephen A. Crockett Jr.

Protesters are forced by police from the business district into nearby neighborhoods in Ferguson, Mo., on Aug. 11, 2014. Police responded with tear gas and rubber bullets as residents and their supporters protested the shooting by police of an unarmed black teenager named Michael Brown, who was killed Aug. 9, 2014, in this suburban St. Louis community.

On Saturday a police officer shot a teenager named Michael Brown in Ferguson, Mo. On Sunday the world knew the teen’s name, and by Monday Ferguson was on fire. The images were jarring, and rightfully so—the appropriate backdrop to an oppressive police environment that isn’t new in a sleepy railroad town, 70 percent of whose residents are black and 90 percent of whose police force is white.

That means that 50 of the city’s 53 officers are white in a town of 21,000 people, according to the Associated Press.

There are two stories as to what happened that day—and one gun and one death.

Police will say that two boys were stopped while walking down the street. Cops tell the story of a slammed car door, of Brown attempting to enter the car, of a scuffle in which the teen reached for the officer’s gun, of a shot fired inside the car. The unarmed teen would run away, only to be gunned down.

The second version is that two kids are walking in the street when an officer tells them to “get the f–k on the sidewalk.” The officer, who has pulled up close to one of the teens, tries to get out of the squad car. The door hits the teen and closes shut. The officer puts the teen in a headlock through the open car window, a scuffle ensues, and then the teen breaks free and starts running. The officer draws his weapon and starts firing. The teen puts his hands in the air and is shot down.

The sad part of the convoluted versions emerging since the shootings is one of racial politics, policing and embedded theory that somehow violence is associated with black skin. That somehow young black men are violent, even while chilling. That somehow just being black is enough to make you a suspect. And walking is reasonable justification to investigate.

And the story of black life and the ability to dehumanize black men so that their deaths are justifiable even when all signs point to blame is a complicated story that involves a history lesson far beyond my scope. But somewhere in the arc between slavery and this act of violence is the lifeless body of Michael Brown covered in only a white sheet for tired residents to view and have scorched into their memories. It didn’t take long for the marching to turn to yelling and the yelling to turn to rage.

Rage is not a useless emotion. It is destructive and damaging, but it is also cathartic and freeing. It is arguably the most primal and guttural feeling in the emotional spectrum, and as such, it is justified for a tragedy of this magnitude.

If I know in this hotel room they have food every day and I am knocking on the door and they let me see the party … I can see the food … but they are telling me there is no food in here. Every day I stand outside trying to sing my way in, ‘We are hungry, please let us in,’ after a week that song is going to change, ‘We hungry, we need some food.’ … After a year, you are just like, ‘I’m picking the lock and coming through the door blasting.’

And it is a hip-hop generation that is being stopped and harassed. They are being targeted and forced to carry the weight of assumptions heaped onto them. Just because the music they listen to carries violent themes doesn’t mean that they do. But those chickens have come home to roost, and while the rage is understandable, the looting is not.

There are lessons to be learned in the anger of Ferguson that doesn’t involve riot gear and military policing. What’s involved is undoing the racial storytelling that has created all black men as animals or suspects or violent or dangerous. It involves a level of humanization and compassion that doesn’t seem to be held for young black men.

While the facts are left for the living to debate, Michael Brown’s voice will carry no weight, his version of events won’t be heard while the police department protects its own. As this was being written, the Rev. Al Sharpton was fighting to have the officer’s name made public.

What happened wasn’t an isolated incident. It was the final straw in a black city that has felt the collective racial tensions brewing. Since the shooting, scores of news stories have emerged with young black men of Ferguson telling of the harassment and brutality that they have faced from police. This death connected a communal oppression that resonated, and the reverb was loud and destructive. So black people who live in Ferguson didn’t have to know Brown personally to know that whatever happened that day could have happened to them.

And for that, they are willing to ride. To protest, to march, to yell and, in some cases, burn things to the ground, because nerves have been exposed and are now sensitive to the touch.

A young man lost his life while running away from a man with a gun. The man happened to be a police officer. The young man happened to be black. What happened that day in question is a storyline that has yet to be sorted out, but the historical narrative that was crafted long before Michael Brown and the unnamed officer met is one that Ferguson is trying to burn down.