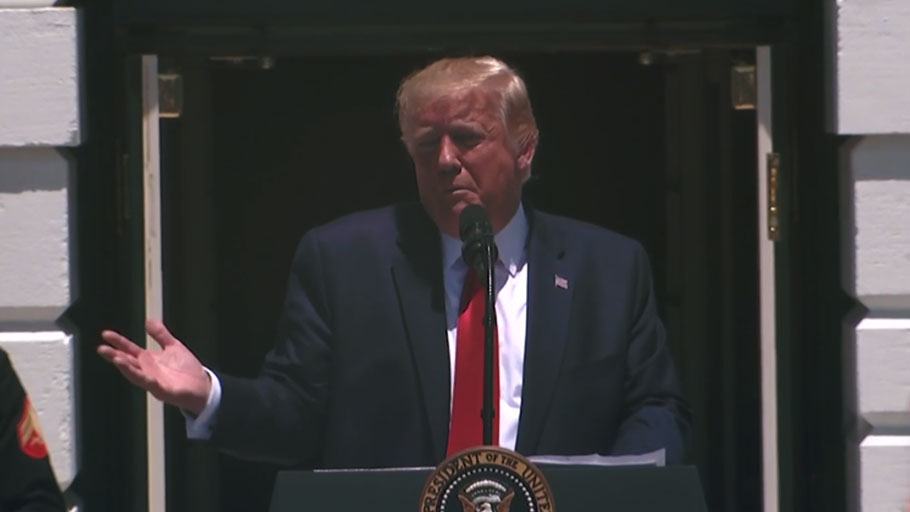 Republicans Want a White Republic. They’ll Destroy America to Get It

You Are Here: Home » Blog » Commentaries/Opinions » Republicans Want a White Republic. They’ll Destroy America to Get It

When in a recent tweetstorm Donald Trump suggested that four Congresswomen of color leave the U.S. and “go back” to the “totally broken and crime infested places from which they came,” social media exploded. Outrage. Even some news outlets finally let go of the euphemisms and called the tweets “racist.” The Republicans, on the other hand, were quiet. As well they would be. The ideological demographics of the party dictated it.

The GOP’s membership is nearly 90 percent white and can only envision carnage and extinction as it looks upon a rights-based, religious, racial and ideologically diverse America. Or, as Lindsey Graham had noted as early as 2012, “We’re not generating enough angry white guys to stay in business for the long term.”

In short, the United States of America is not really their America. They yearn for a white republic. That’s why they are fighting to recreate the days when, as Archie Bunker sang, “Guys like us, we had it made.” That’s why they’ve willingly gone along with and participated in a sustained attack on the country itself, allowing it to grow weaker so that they could feel stronger.

Already, Trump and the Republicans have severely harmed the institutional heft of checks-and-balances. But they’re not done. America’s international reputation and influence rest on enormous economic and military strength, as well as the intangible but all-important “soft power” brought on by a robust democracy. All three pillars are necessary to sustain America’s nearly global respect and position, yet — and this was the rub — all three are increasingly dependent on more than just whites in the United States to build and sustain. For white America to exist, America must die. And the Republicans have made their choice.

In their effort to restore a white America, the GOP had to wound the kind of multiracial democracy that not only elected Barack Obama to the presidency but enhanced America’s global reputation. Republicans, therefore, set out to create an electorate that was disproportionately white and conservative. In Ohio, Florida, Wisconsin, Alabama, North Carolina and more than 20 additional states GOP policies targeted African Americans, Hispanics, Asian Americans, Native Americans, the young and the poor to keep them away from the ballot box. Republican governors and GOP-majority state legislatures deployed an array of voter-suppression tactics, including closing hundreds of polling stations in minority and low-income precincts, slashing early voting hours, reinstating poll taxes, mandating discriminatory voter ID laws and purging millions from the voter rolls.

Meanwhile, before his death, Republican legislative mapmaker Thomas Hofellerset in place another key foundation for a white republic. He crafted extreme gerrymandered Congressional districts across the United States that violated the basic Constitutional concept of “one person, one vote.” His legislative maps diluted the electoral strength of large, racially diverse cities, and magnified the power of overwhelmingly white suburbs and sparsely populated rural areas. In North Carolina, for example, Hofeller’s map meant that although Democrats won 50 percent of the vote in the 2018 election, they received only 23 percent of the Congressional seats. He also had devised a method to erase the electoral strength of the growing Hispanic population by rigging the Census in a way that would create legislative districts that, in his words, “would be advantageous to Republicans and non-Hispanic whites,” and, by design, diminish the political voice of anyone else for at least a decade. (That effort was blocked by the Supreme Court.)

The dismantling of a robust, multiracial democracy requires not only acts of commission, such as the 5-4 Shelby County v. Holder decision by the conservatives on the Supreme Court to gut the Voting Rights Act, but sins of omission as well. Mitch McConnell’s flat-out refusal to even engage legislation that would protect the nation’s electoral infrastructure from hacking and foreign interference, despite solid evidence that it occurred in 2016, sends a clear signal that for his ilk this is not an American democracy worth protecting or saving.

The dangerous quest for a white republic is also undermining the U.S. military. When Trump came to power, there were more than 40,000 immigrants in uniform willing to fight and die for the United States. About 5,000 joined every year. The Department of Defense under this Administration, however, has either proposed or implemented policies that renege on promises of citizenship for immigrants in the armed services, issued directives that ban immigrants, even those with special language and medical skills, from serving and threatened to deport the families of those who are currently in the armed forces. Meanwhile, soldiers and sailors who are supposed to represent and defend all Americans have been seen proudly wearing MAGA caps and patches, even though racial and ethnic minorities “made up 40% of Defense Department active-duty military in 2015.” Not surprisingly, in 2018, the Army missed its recruiting goals and then had to lower its expectations for 2019, to avoid two consecutive years of failure.

The economic might of the United States has not been spared either. While much of the discussion on the economy and immigration has focused on the impact on the agricultural sector, the GOP’s xenophobic policies are also taking a direct hit on higher education and the nation’s capacity for and leadership in technological and scientific innovation. A 2013 report notes that international students enrolled in American universities accounted for “70.3 percent of all full-time graduate students in electrical engineering, 63.2 percent in computer science, 60.4 percent in industrial engineering, and more than 50 percent in chemical, materials and mechanical engineering, as well as in economics (a non-STEM field).” Those students bring the brainpower to innovation, research and technology. In fact, between May 2009 and May 2015, employment in STEM occupations grew by 10.5 percent, compared with 5.2 percent in non-STEM occupations. Nearly three-fourths of those employed in Silicon Valley tech companies are not American citizens. Yet, with the rise of Trump and his policies and rhetoric, U.S. higher education, which fuels this STEM growth, is simply not as attractive as it had been. After Trump came to office and launched the Muslim Ban, harangues to “Build the Wall” and disparaging comments about “shithole countries,” enrollment from international students dropped 5.5 percent in graduate programs and more than 6 percent in undergraduate programs at American universities.

The determination to build MAGA Land explains why what should be obvious tripwires – disrespecting military heroes; engaging in widespread corruption; cavorting with a communist dictator in North Korea and a journalist-killing authoritarian in Saudi Arabia; dodging multiple allegations of sexual assault, including rape; creating horrific scenes of White House-sponsored cruelty on the border; and believing Putin over our own intelligence agencies about Russian interference in the 2016 election – have all failed to dislodge one of the most unpopular presidents in recorded history. Put simply, because Trump promises Republicans a return to white dominance, he is more important to the GOP and its base than the country those in power took an oath to support and defend.

Trump’s vicious tweets have once again spurred a conversation about whether the President is racist, and the Republicans’ relative silence has once again raised questions about why they refuse to condemn him (only four GOP members voted for a House resolution to do so). But to focus solely on this week’s events, or even to look at Trump’s many racist statements in the past, is to miss the bigger picture: The scurrilous attack on Representatives Ilhan Omar, Ayanna Pressley, Alexandra Ocasio-Cortez and Rashida Tlaib was just part and parcel of a larger assault on America and the rich diversity and rights culture that are essential for true greatness.

Carol Anderson is the Charles Howard Candler Professor of African American Studies at Emory University and the author of White Rage: The Unspoken Truth of Our Racial Divide and One Person, No Vote: How Voter Suppression is Destroying Our Democracy.