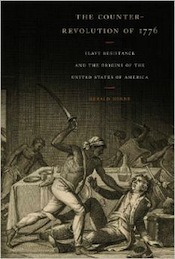 You Are Here: Home » Blog » Commentaries/Opinions » Revolution in Reverse?

Gerald Horne’s The Counter-Revolution of 1776 was overlooked by most liberal media when it was published last spring, but it really can be considered one of the more notable books of 2014. It is actually a very short but dense and abundantly sourced book, original and broad in its scope—in many ways a magisterial work.

During the 1970s, South Africa used to be characterized by the U.S. government as “partly free” because its white minority had rights. In like manner, the American War of Independence, cast as a battle over kingly prerogative and unfair taxation, is deemed to be liberating except for slavery. Horne argues instead that preserving slavery was an impelling motivation for colonial secession and the outcome proved a human rights disaster.

Not only did it lay the basis for a continuation of slavery for 87 years and a subsequent apartheid state in the South (and unofficially in the North)—and this at a time when abolitionist mass sentiment was growing in England and elsewhere in Europe. But because slaves (and indigenous people) were perceived as a subversive element during the war, the rebel victory cast them in the longstanding role of “intestine enemies” of the state.

Abolitionism in the late 18th century was not simply an intellectual current (whose colonial adherents, taking into account practical problems involved, tended to favor a more gradualist approach). The legality of slavery had come under serious challenge in London’s courts. The historic Somerset decision of 1772 may in fact have delivered the coup de grace to slavery, making it illegal in Britain, a development that would logically extend to the American colonies, where the prospect of ending slavery created a firestorm, as reflected in the newspapers of the time.

Horne argues that there was little ambiguity about the Founding Fathers’ intention to preserve slavery. Notwithstanding the inspirational language of the Declaration of Independence, they “had normalized this form of property as any other.”

“In Boston, those who were pro-London often represented the enslaved in court, while rebels routinely represented masters.” John Adams “served . . . as a counsel for slaveholders and once argued that Massachusetts presumed all Africans to be slaves.” Even Ben Franklin “struck back vigorously” against the abolitionist Granville Sharp, and the list goes on. Africans pretty much had to rely on Tories to get a fair hearing in the court system, and understood that severance from Britain would only worsen their situation.

Fears of violent reprisals at the hands of African slaves fueled the colonists’ animosity and sense of persecution by Britain.

When Lord Dunmore, the Royal governor of the British colony of Virginia, ultimately threw down the gauntlet in November of 1775, issuing his famous proclamation offering to free all slaves, it added yet more fuel to the fire. Africans, for their part, according to Horne, almost universally sided with England and were hoping for an English victory, which they believed would deliver them from slavery.

Lest we assume some inherently humane response to suffering on their part, Horne assures us the British attitude toward slavery was no less pragmatic than the Americans’ (whose hopes for economic independence were predicated upon the continuation of the slave system in agriculture). In these years predating the explosive growth of cotton manufacturing, the British found slavery incompatible with the needs of a global empire that had come to rely by default on using Africans as soldiers to defend British interests in the hemisphere and elsewhere.

Britain, of course, had long been heavily invested in the African slave trade. Part and parcel of their own “democratic” development, it was the “Glorious” revolution with its Bill of Rights that weakened the monopoly of the Royal Africa

Company, leading Parliament to mandate “the trade in Africans would be open to ‘all his majesty’s subjects.’” “This deregulation of the trade in human flesh fomented a kind of free trade in Africans. This aided immeasurably in providing the forced labor needed to develop the mainland, which in turn brought this local elite into increasing conflict with London, particularly when it sought to trade with neighbors who happened to be foes of the Crown . . . “

Britain experienced violent African resistance in its Caribbean colonies. The dangers induced many slave owners to migrate to the American mainland, where they attempted to overcome these conditions. The drawbacks continued to manifest themselves on the mainland as well. Florida became a rear base for “rebellious and runaway slaves.” In the 1740s Spanish troops were attacking Georgia from forts in Florida peopled by hundreds of armed Africans. Slavery was “delivering stupendous profit—while simultaneously threatening colonialism . . . in the form of African revolt, assisted by the indigenous, European foe, or both.” Horne delves into the history of slave rebellions and the colonists’ stratagems to overcome them:

“Carolina had been the designated firewall protecting Virginia and points north, but then the formation of Georgia was a damaging admission that a new firewall had to be constructed and extended further south to the border with Spanish Florida. But this was a poisoned chalice since now London’s subjects were ever closer to armed brigades of Africans, many of whom sought revenge against these rapacious settlers. London was forced to defend a profoundly unsettled mainland with an unusual conception of patriotism that did not rule out intimate relations with the Crown’s bitterest enemies.”

The colonists may have expected British protection, but they were as loath to be taxed to pay for it as they were to take up arms themselves. Of course they could not countenance arming Africans and providing them with the customary pay. Relying on armed Africans from the Caribbean, Britain won the French and Indian War, whose most profound outcome was the ouster of Spain from Florida (rather than the defeat of France). Destroying this refuge for fleeing Africans set the stage for an increase in slave importation to Georgia and Carolina and for a de facto alliance of the American colonists with London’s former antagonists. It “proved to be a catastrophic victory for London, for when pressure was eased on mainland settlers . . . they seized the opportunity to revolt against the Crown with ample aid from the ‘Catholic powers.’ Ultimately this led to the creation of a slaveholders’ republic that then ousted the European powers from leadership in the African slave trade . . .”

Although the book is arranged into chapters with nominal themes, it seems to read more like a running essay. Horne digresses, and he keeps unnecessarily repeating many of the points he’s already made—which sometimes distracts from an otherwise fascinating work. Drawing from a broad array of sources that includes fresh archival material, he has written a strong and convincing reinterpretation of the American War of Independence. The Counter-Revolution of 1776 brings into focus fundamental facts that have been hitherto ignored or unknown–revealing much about this republic’s origins that is needed to understand where we are now.

Kathy Deacon is a freelance writer living in New York.