Social media is the new heart of political protests

You Are Here: Home » Commentaries/Opinions » Social media is the new heart of political protests 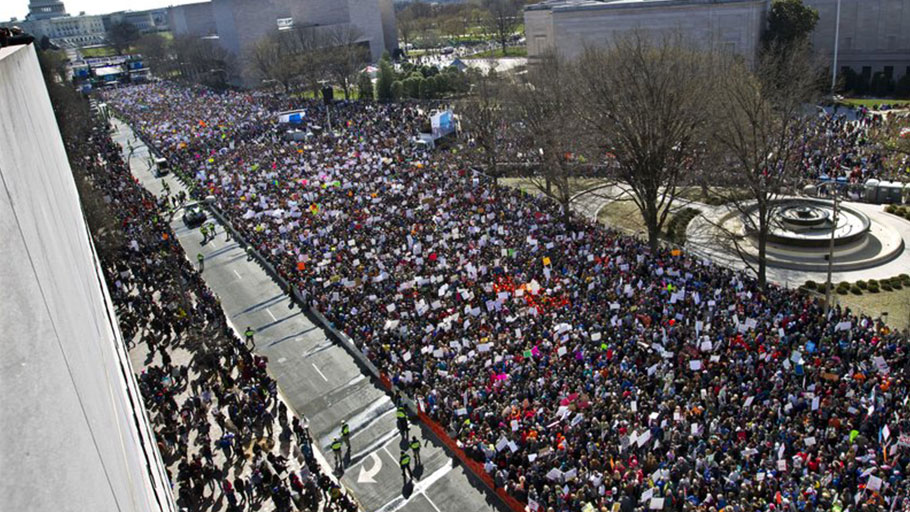 In this March 24, 2018 file photo, protesters fill Pennsylvania Avenue, as seen from the Newseum, during the “March for Our Lives” rally in support of gun control in Washington. Rachel Einwohner, a Purdue University sociology professor, says, “With the rise of social media, it’s definitely a lot easier for people to mobilize more quickly and you don’t necessarily need to have one charismatic leader like Dr. King, who had almost some kind of magical quality… But you still do need some powerful message that really resonates with a lot of people.” (AP Photo/Jose Luis Magana)

During the 1960s and into the 1970s, amid the turbulence of protests for civil rights and against the Vietnam War, every movement seemed to have a famous face — someone at a podium or at the front of a march who possessed a charismatic style, soaring oratory and an inspiring message.

The new wave of political activism, marked by protests in the nation’s capital and cities across America, looks more anonymous.

Since the presidential election of Donald Trump, there have been marches for women, science, the Dreamers — immigrants brought to the U.S. illegally as children — and most recently, gun control, a response to the school shooting in Parkland, Fla. In all those events, multitudes of voices — some more high-profile than others — have represented each cause.

Have America’s protests changed so they rely more on the masses and less on one captivating leader?

The answer, some experts say, is yes, for two reasons: Progressive politics have moved in that direction— think Black Lives Matter, Occupy Wall Street — and social media has radically transformed activism. Decades ago, it could take weeks of planning, newspaper ads, phone trees and a rousing speaker to organize a successful protest. Now a Facebook post or a series of tweets can fill the streets, jam a state capitol or block an expressway.

“With the rise of social media, it’s definitely a lot easier for people to mobilize more quickly and you don’t necessarily need to have one charismatic leader like Dr. King, who had almost some kind of magical quality,” says Rachel Einwohner, a Purdue University sociology professor. “But you still do need some powerful message that really resonates with a lot of people.”

Social media also makes it harder for a leader to emerge because it frequently traffics in bruising personal attacks, says Dana R. Fisher, a University of Maryland sociologist who is writing a book “American Resistance” about large-scale protests.

“I wonder to the degree to which people can lead in the same way in this era of Twitter and Facebook,” she says. “Everybody’s a critic. … With people trolling and then clashing on social media, it may be harder to create a following in the same way that we saw with these leaders in the past.”

Technology alone hasn’t created the shift. Some progressives believe there’s “something inherently wrong or problematic” about having one dynamic person seize the spotlight, says Fabio Rojas, an Indiana University sociology professor. “Modern progressive social movements see themselves as a very democratic form of politics. When they make decisions, they want a lot of consensus. They want a lot of deliberation.”

Black Lives Matter, which has been in the forefront of protests against police violence and fatal shootings of Black men, is among the many movements that have adopted this approach.

“The model of the charismatic leader was not something that we were interested in and in fact, many of us were trained to believe that the people themselves are going to set themselves free, not one person,” says Patrisse Cullors, a co-founder of the group. It’s “dangerous,” she says, to have one leader because that person becomes “the target of praise or the target of demise.”

Black Lives Matters, she says, was inspired by ‘60s activist groups, including the Black Panther Party, which combined militancy and social programs (free breakfast for children), and the Student Nonviolent Coordinating Committee, a civil rights organization involved in sit-ins and voter registration that became more radical in its later years.

Cullors says her group, formed in 2013 in response to the acquittal of a neighborhood watch volunteer in the fatal shooting of Trayvon Martin, an unarmed Black teen, is sometimes misunderstood.

“People assume because we hit the streets and protested that we don’t believe in anything else … and that because we don’t have a single leader, we’re aimless.” Instead, she says, Black Lives Matter, which has 40 chapters in the U.S., Canada and England, has a clear strategy, including participating in electoral politics. Some members are running for office and in 2016, the group, with other organizations, signed on to a policy plan that called for universal health care and an end to the death penalty.

Another leaderless movement that shook up the establishment, Occupy Wall Street, was influenced, in part, by the Arab Spring, the uprisings in several Middle East countries that brought hundreds of thousands in the streets, leading to the toppling of some regimes.

The sometimes raucous protests in 2011 transformed a park in the heart of New York’s financial district into an encampment with sleeping bags, tents, a makeshift kitchen and a rallying cry — “We are the 99 Percent” — condemning the concentration of wealth in the U.S.

Micah White, the group’s co-founder, says even though it took only a few thousand dollars to launch the movement, half of America had heard of it a month later. “That’s priceless,” he says. “You can’t even get a Super Bowl ad that would reach that many people.”

Many credit Occupy with putting economic inequality on the national radar, but White says the group’s real goal — to end the influence of money on democracy — was “a constructive failure. … The main lesson is that street protests do not translate into political change because elected representatives are not required to listen to the majority.”

During the two months of the Occupy protests, White says, the encampments “devolved into paralysis when asked to come up with a list of demands.” But he also notes there still was a worldwide ripple effect.

“The way social movements are created now is that you release an idea that other people take up as their own,” White says. “That’s precisely why Occupy was spread to 82 countries. We couldn’t have organized Occupy Wall Street in 82 countries. … The strength of leaderless movements is in their capacity to spread extremely quickly. Their weakness is in their inability to make complex decisions.”

In the late 1980s, members of ACT UP (AIDS Coalition To Unleash Power) demonstrated on Wall Street and shut down the Food and Drug Administration offices for a day, demanding increased access to experimental AIDS drugs. Code Pink, a women-initiated activist organization, has been a vocal anti-war presence, at times interrupting congressional hearings.

Since then, other social causes have surfaced, notably the recent #MeToo movement against sexual harassment and violence.

And some long-standing crusades, such as the push for tighter gun laws, have a new face — the teens from Parkland, Fla., who organized a massive rally in Washington, D.C., in April.

Trump’s election also spawned Indivisible, a grass-roots organization with some 6,000 local groups, some of whom have held vigils, marches and die-ins concentrating on both local issues and national concerns such as voter suppression, health care and the DREAM Act. Rather than have one person direct activities from the top, “it’s the people who are organizing in their own communities who are best placed to adapt their message,” say Leah Greenberg, Indivisible’s co-founder. — (AP)

While this democratic approach is effective, experts also say there are benefits to having a leader.

Leaders also can mobilize people behind a common cause.

“A lot of people out there today feel there’s something really wrong and broken with the country, with the world,” says Karthik Ganapathy, rapid response director at MoveOn.org, a public policy advocacy group. “The value of having a centralized leader is there’s someone saying, ‘Here’s what you can do about it.’ As of now, though, he says, there’s no social movement or protest leader who “can really claim that mantle the way that King did.”

But even in King’s day, movements couldn’t be reduced to a face on TV or a voice at the pulpit.

Whether it was the bus boycott in Montgomery, Ala., the Vietnam War protest at the Lincoln Memorial or the farm workers’ strike in California, each history-making event depended on hundreds, if not thousands of foot soldiers who never saw their names in the newspapers but organized, raised money and engaged in other grass-roots work.

And many leaders were backed by formidable organizations: For King, it was the Southern Christian Leadership Conference; for anti-war activist Tom Hayden, the Students for a Democratic Society; for feminist Betty Friedan, the National Organization for Women.

“We will always have voices that rise because they have the clear articulation of the agenda,” says the Rev. William Barber, co-chairman of the Poor People’s Campaign, a civil disobedience movement modeled after a 1968 plan by King to focus attention on race, poverty and injustice. Back then if you’d asked Chavez or King, he says, “they would never say they were the movement, they would say they were servants of the movement.”

Hasan Jeffries, an associate professor at Ohio State University and expert on African-American history, says the civil rights movement was always decentralized, but the media, looking for someone quotable, would zero in on one person. Often, that was King.

With King’s assassination in 1968, he says, there wasn’t just the loss of a magnetic leader, but a sense his nonviolent approach wasn’t working and a flourishing of the Black power movement.

These days, there may be no one dominant leader in the African-American community, but social media like Twitter and Facebook offer a different way to rally supporters.

“Activists are now able to push back, mainly through social media and provide channels for multiple voices in ways that simply were unavailable on a large scale 50 years earlier,” he says.

That doesn’t mean the message gets through, Jeffries adds, noting some people still ask what Black Lives Matter wants, though he believes it’s abundantly clear.

“Do you need a single person to express this? Some may say, ‘Yes,’” he says. “But even when a single person tries to articulate something, if the audience is purposely choosing to be not receptive, it doesn’t matter if it’s one person or 100 people, that voice is not going to be heard. It’s not so much who’s saying it, it’s what they’re saying is the problem.”

Einwohner, the Purdue sociologist, says when history books are written decades from now, they’ll include Black Lives Matter, the Dreamers and giant demonstrations such as the women’s marches.

“I think we’re going to remember this more as a cycle of protests, which were planned and organized by lots of people,” she says. “These rallies didn’t come out of nowhere. People are taking action. I can’t think of a name or a face that necessarily is going to be remembered 50 years from now. But will these movements be remembered? Absolutely.” — (AP)

Sharon Cohen, a Chicago-based national writer, can be reached at scohen@ap.org or on Twitter @scohenAP.