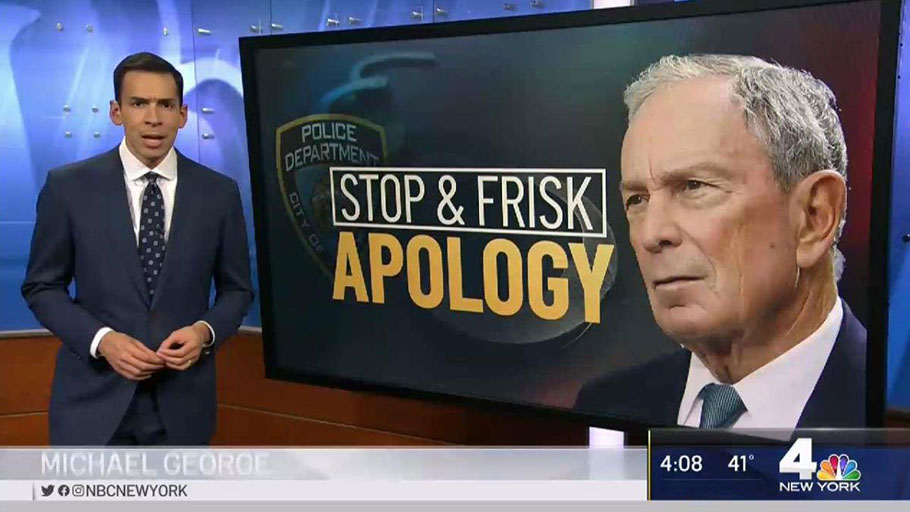 You Are Here: Home » Blog » Commentaries/Opinions » Stop and Frisk Still Could Stop Bloomberg

Former New York Mayor Michael Bloomberg has a colossal problem if he has any hope of ever becoming President Bloomberg. And he knows it. It’s stop and frisk. He deservedly took much heat for cheerleading the heinous stop and frisk rousting of tens of thousands of young Blacks and Hispanics on NYC streets during his 12-year mayoral tenure. In almost all cases they committed no crimes.

He knew that his presidential campaign would be DOA if he didn’t do something to exorcise this hideous ghost of the past. So, he did a smart thing. He went to a Harlem church and offered a kind of, sort of apology for the hideous practice. There were still many skeptics among the listeners. By and large, though, they gave him a pass.

But many others aren’t so forgiving. Blacks on social media, for instance, have been relentless in skewering Bloomberg for his cheer lead of stop and frisk. The knocks against him for this have been so withering that it even caught the attention of Trump. He branded Bloomberg “a racist” for his tout of stop and frisk. This seemed beyond bizarre given Trump’s serial racism and the fact that he is even a bigger cheerleader of stop and frisk and ham-handed policing tactics than Bloomberg could ever dream of being. Still, it was politics and since Bloomberg is now a serious presidential contender, it was another chance for Trump to skewer a potential challenger.

This, and the other raps against Bloomberg for stop and frisk, might well have blown over. But then an old audio tape surfaced of Bloomberg in a talk as mayor praising the merits of stop and frisk as an effective crime fighting tool. It was off to the races again with this.

And with good reason, in fact, two good reasons. The issue of police abuse is the flash point issue that persistently poses the thorniest problem for Democrats. So big, that the current crop of Democratic presidential candidates have had to do a kind of mea culpa for their checkered histories on policing issues and Blacks. Biden did his with his walk back of support of the Clinton Crime bill. Buttigieg did his with his walk back of how he handled a police killing and police abuse claims against Blacks in South Bend. Klobuchar did it with her kind of walk back of her handling of a controversial prosecution of a young Black for murder. Though Bernie Sanders has no apparent police friction issue in his past, he wasted no time in laying down a comprehensive plan for criminal justice reform. A centerpiece of which is a crackdown on police misconduct.

They’ve had to do their penance for the same reason Bloomberg did. The Black vote this presidential election go around is simply too crucial to their campaigns. Trump’s base in the five states that will decide the White House is rock solid. Every Black vote the Democratic presidential nominee can get will be needed to offset Trump’s rabid and fired up base. That is less educated, low-income blue collar and rural whites. They will vote and vote in big numbers for him. The Democratic counter to that is to try and rev up an Obama like surge of Black vote support in those states. That didn’t happen in 2016 with candidate Hillary Clinton. And the big plunge in Black voter turnout in those states was a major reason that Trump eked out a win in them.

Bloomberg certainly knows this history and the dilemma. Thus, his public distancing from stop and frisk. That’s not nearly enough, though. So, Bloomberg has sweetened the political pot by blitzing the nation with an eye popping plan to spend billions on an economic reconstruction plan for Black America, and has spoken long and loud about the hideous past off slavery and Jim Crow segregation and the devastating legacy that still shackles poor Blacks and poisons race relations in America. Bloomberg to his credit is the first top Democratic presidential candidate who has made the stupendous gap between poor and working-class Blacks and just about everybody else in America a front burner issue.

His apology for stop and frisk, though clearly political motivated, if nothing else, sent the right signal to law enforcement that stop and frisk, and racial profiling, is not legitimate crime fighting tools but harassment pure and simple. When police engage in this, the message from Bloomberg now is, stop it.

Now the question is, will any of this be enough to prod Blacks too forgive him for this past? Several prominent Black elected officials already have, and probably more will if Bloomberg continues to beat hard the racial drums. But be advised stop and frisk punched too many hot buttons to melt away as an issue on the campaign trail. It certainly won’t for Bloomberg.

Earl Ofari Hutchinson is an author and political analyst. He is the author of What’s Right and Wrong with the Electoral College (Middle Passage Press)

He is a weekly co-host of the Al Sharpton Show on Radio One. He is the host of the weekly Hutchinson Report on KPFK 90.7 FM Los Angeles and the Pacifica Network. He publishes the hutchinsonnreport.net