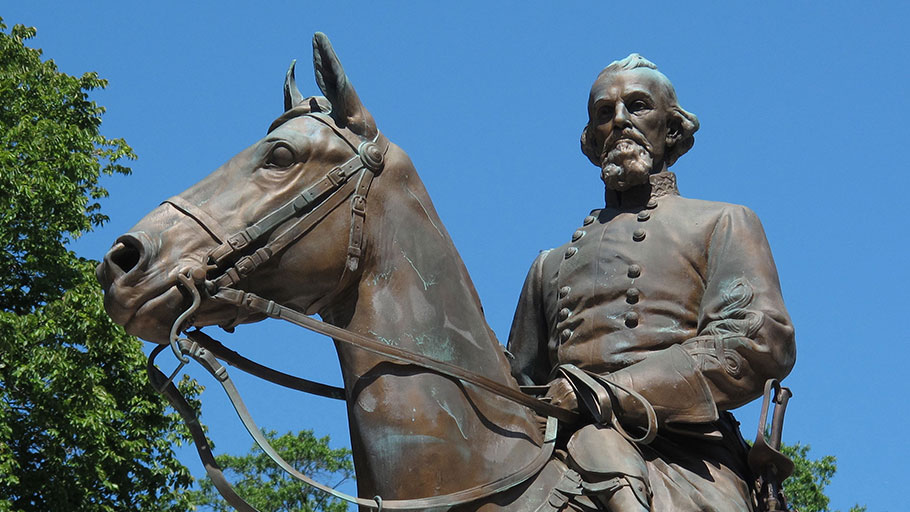 Tennessee Just Showed That White Supremacy Is Alive and Well

You Are Here: Home » Blog » Commentaries/Opinions » Tennessee Just Showed That White Supremacy Is Alive and Well

A statue of Confederate Gen. Nathan Bedford Forrest sits in a park in Memphis in August 2017. (Photo: Adrian Sainz, AP)

An obscure Tennessee law required Gov. Bill Lee to declare this past Saturday “Nathan Bedford Forrest Day” to commemorate the Confederate general and Ku Klux Klan leader. But Lee went further, admitting he had not even considered whether the law should be changed. His actions drew sharp criticism from politicians throughout the country, including ultraconservative U.S. Sen. Ted Cruz (R-Tex.).

Lee’s refusal to call for changing the law and the fact that Tennessee still celebrates Forrest are a stark reminder that white supremacy is alive and well. For those who have fallen for the “post-racial society” myth, Lee’s declaration may be a wake-up call. But for everyone else, Lee’s declaration is just another reminder that white supremacy is deeply entrenched in American society.

By paying homage to a horrific figure like Forrest, Tennessee is disrespecting its black citizens and signaling that it would rather uphold its racist past than grapple with its many toxic legacies.

Forrest has been deeply embedded in that racist legacy for more than 150 years. The political question of his time was one that had starkly divided Americans since the founding: slavery. So fundamental was slavery to Southern states that seven of them seceded from the Union after Abraham Lincoln’s election on Nov. 6, 1860. The thought of a president entering office who might bring an end to slavery — although Lincoln made no such promise — sent Confederate leaders into a frenzy.

The quick unraveling that took place following Lincoln’s election underscores the deep divisions over race in the nation, divisions that remain at the core of U.S. society. Indeed, the Confederates’ struggle to protect “states’ rights” was nothing more than an effort to preserve states’ rights to uphold slavery.

Confederate Vice President Alexander H. Stephens admitted as much in his 1861 Cornerstone speech. “[Our new government’s] foundations are laid, its cornerstone rests, upon the great truth that the negro is not equal to the white man; that slavery subordination to the superior race is his natural and normal condition,” Stephens bluntly proclaimed.

That became abundantly clear after the war ended. While the North tried to bring about some measure of racial equality through the 13th, 14th and 15th Amendments, and Reconstruction more broadly, the South was determined to maintain as much of its way of life as possible. Southern legislators quickly enacted black codes, laws designed to curtail black freedom and control black people’s lives and labor.

Concerned that their ironclad rule was at risk as black people gained more political rights, a group of Confederate veterans organized the first branch of the KKK in Pulaski, Tenn., explicitly to maintain white supremacy. They were determined to keep black people “in their place” through unrelenting violence, terror and intimidation.

A year later, the group elected Confederate Gen. Nathan Bedford Forrest, a man well known for his blatant disregard for black people, as the group’s grand wizard. The former slave trader and slaveholder had owned several cotton plantations in Tennessee, becoming one of the wealthiest white men in the region. Under his leadership, the KKK terrorized black residents and destroyed homes, schools and churches in Tennessee and throughout the South. By the early 20th century, the KKK had become an organization with millions of white members in hundreds of chapters throughout the country.

From Tennessee to New York, white mobs attacked black people and devastated black communities with impunity. And they did so in the name of white supremacy and often under the banner of the Confederate flag.

Terrorizing black people, especially those who dared fight for equal rights, remained a routine feature of American life throughout the first half of the 20th century, as in 1921 when Nathan Bedford Forrest Day was established. As the nation underwent significant political transformation during the 1960s and 1970s, white supremacists continued to erect Confederate monuments and statues, and defiantly promoted Confederate symbols and icons to signal their blatant refusal to accept the expansion of black citizenship rights.

This pattern was evident in Tennessee. In 1964, Tennessee elected A.W. Willis Jr. as its first black state legislator since the 19th century, and in 1966, Dorothy Lavinia Brown became the first black woman to serve in the Tennessee General Assembly. As African Americans found greater political opportunities in Tennessee, however, white supremacists devised strategies to intimidate black voters. By 1971, years after Jim Crow was defeated, a Tennessee code was established to recognize six state holidays, including Nathan Bedford Forrest Day, now a “special day of commemoration,” on July 13. In 1978, a bust of Forrest was placed in Tennessee’s Capitol rotunda.

By exalting figures like Forrest, and doing so in very public ways, white supremacists in Tennessee glorified — and continue to glorify — the Confederacy and everything it stood for. Even more so, they were sending a clear message to black people that white supremacy would remain the order of the day, regardless of the political gains of the civil rights movement.

Today, many Southerners claim that such commemorations and the refusal to purge the symbols and icons of the Confederacy merely reflect homage for their “heritage.” But this “heritage” is inextricably intertwined with slavery, white supremacy, violence and terrorism. That’s what Nathan Bedford Forrest stood for, and a day in his honor is reprehensible.

Forrest deserves no recognition, only scorn. Declaring Nathan Bedford Forrest Day in 2019 mocks the millions of black people in this country whose lives have been devastated by the history of slavery, oppression, and white mob violence.